Seismic waves are elastic waves propagating inside the Earth. Like any other kind of waves, their velocity depends on the properties of the medium they are passing through. If a wave passes through a discontinuity between two different media with different properties, some of its energy is reflected back and some is transmitted, though refracted. That’s what happens to light when it passes from air to water, to a medium with different properties. If we theorize that the Earth’s density increases constantly with depth, we can imagine a seismic ray (defined as the perpendicular to the wavefront) that, while it propagates in depth, it is continuously refracted away from the vertical at each refraction at deeper and deeper discontinuities with higher density strata; the seismic ray will progressively drift from the vertical eventually turning back towards the surface. This means that there are rays than can pass through the whole planet and come back to the surface carrying information about the Earth’s interiors stored as seismic waves and recorded on seismographs.

In 1909, the Croatian geophysicist Andrija Mohorovicic (1857-1936), while analyzing the Pokuplje Earthquake (Kupa Valley, 40 km south of Zagreb), which had occurred on October 8, noticed some particular seismic wave arrivals. 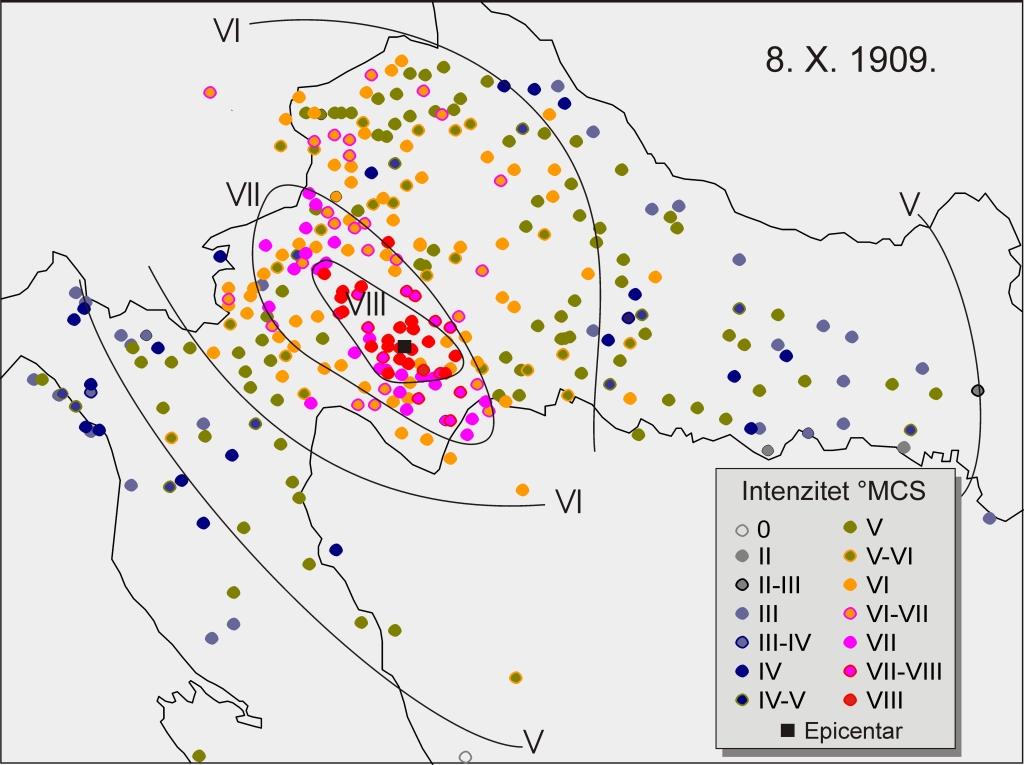 Isoseismal map of the Kupa Vally (Croatia) earthquake of October 8, 1909

The larger the distance of a recording station from the epicenter, the longer the time for the seismic waves to reach it. Therefore, one should expect that on a space-time graph a straight line would join all graphed arrival-time/distance pairs. The straight line’s dip would be a function of wave velocity. Mohorovicic used the S wave arrivals to build the graphs because their amplitude is wider and they’re more readily recognizable. But joining the S wave arrivals he did not obtain straight lines but broken lines.

How can this be explained? What happens when a wave passes into a denser medium? As already stated, when a seismic wave passes through a discontinuity it is partially reflected and refracted. Reflected waves, whether they are P or S, should get back to the surface with the same angle they met the discontinuity at, then recorded on seismographers. Refracted waves should keep going down with a higher angle than the incident one (if they pass into a denser medium). There will be a certain critical incidence angle that will generate a refracted ray that would be parallel to the discontinuity; the latter will become a generator of rays (the headwave) departing to the surface at the same critical incident angle (bottom). 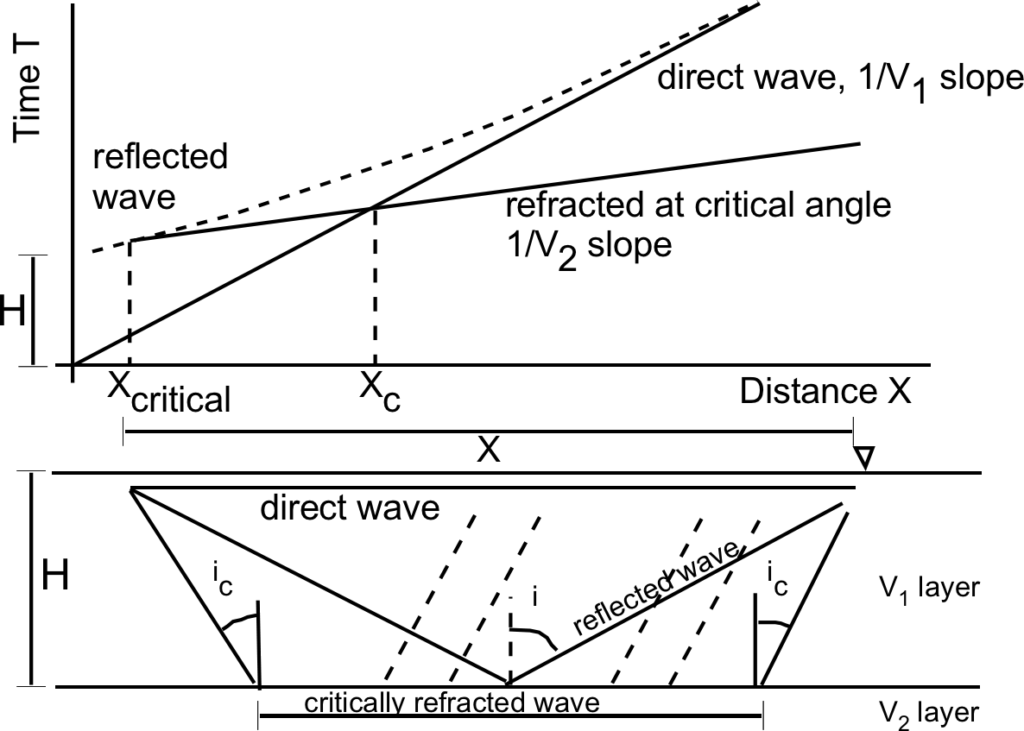 At a certain distance Xc, which depends on the depth H of the discontinuity, the refracted waves arrive before the direct ones

Close to the epicenter area, the first arrivals are the direct waves, traveling almost horizontally toward the seismic station. The waves reflected by the discontinuity will arrive later. Those waves travel in the same medium, at a constant velocity. Critical waves traveling along the discontinuity will travel at a higher velocity due to the higher density on that surface. At a certain distance those waves will arrive at the same time as the reflected waves, then even ahead of them. That would explain the broken line in the space-time graph and would also allow us to calculate the depth of the discontinuity. 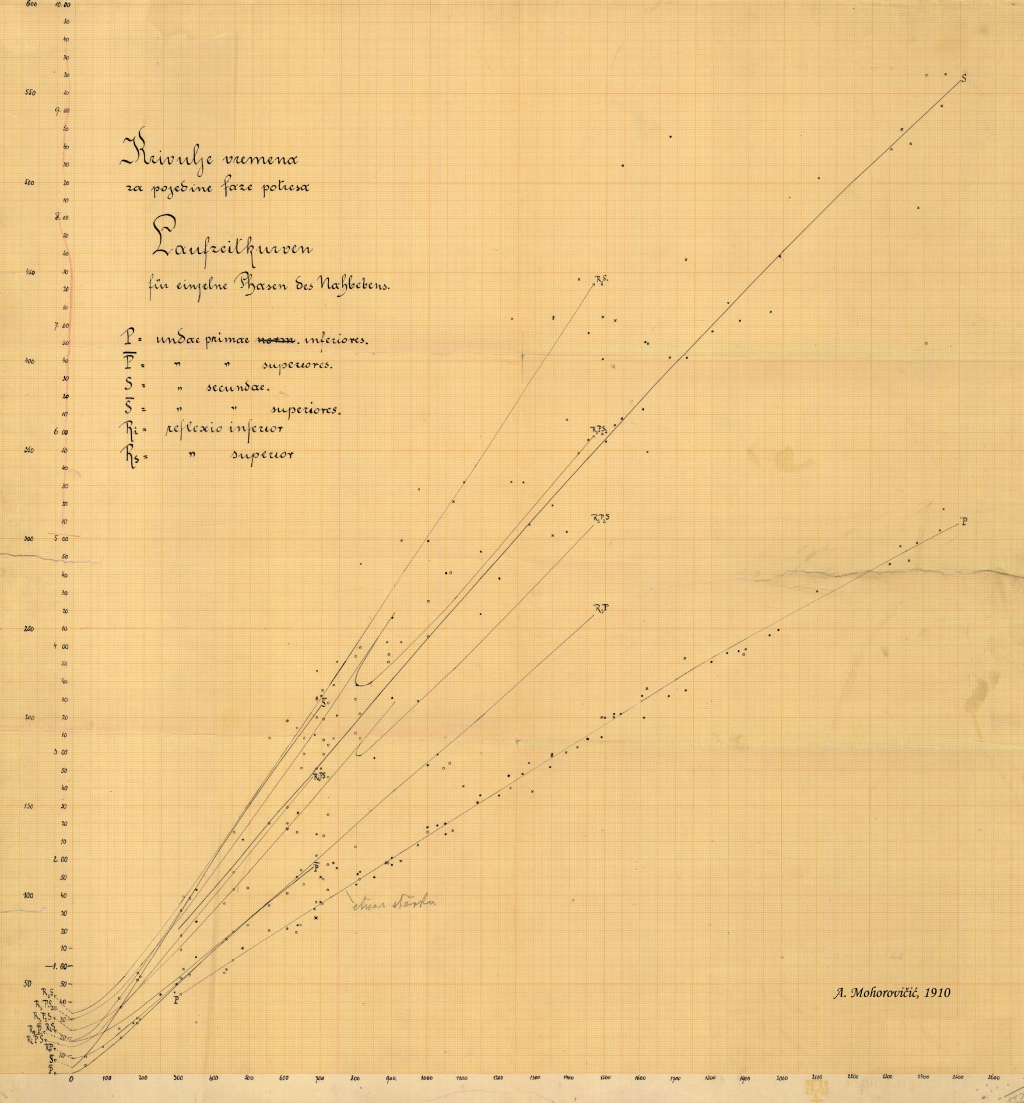 Mohorovicic calculated about 50 km under Croatia. The discontinuity still bears his name to honor this discovery – it is “Moho”, in brief.

The density increase is explained with a composition change at the base of the crust, where the Earth’s mantle begins (called so because it shrouds the core).

From surface and well data we know the average composition of the continental crust as being close to that of granite-diorite rocks (rich in quartz, sodium silicates, and calcium silicates); the oceanic crust is poor in quartz and its composition is close to that of basalts (rich in iron and magnesium silicates). For what concerns the mantle, rocks from deep volcanic conduits suggest a peridotitic composition (iron and magnesium silicates with low silica content).The Moho is at a 30-40 km depth, less than 10 under ocean floors. Beneath the mountain belts it can reach as deep as 70 km.