The crust is the outermost shell of the earth, the upper part of the lithosphere. The Moho separates it from the mantle, which has a different composition. The plates move, interacting with each other at their margins. Evidence of their interaction is seismicity and volcanism as well as deformation at various scales. Mountain ranges are a magnificent expression of the deformation of the Earth’s crust, but there need not be mountains, i.e., strong elevation, for intense deformation to be present as well. The tangible sign of crustal deformation is the formation of “geological structures.” 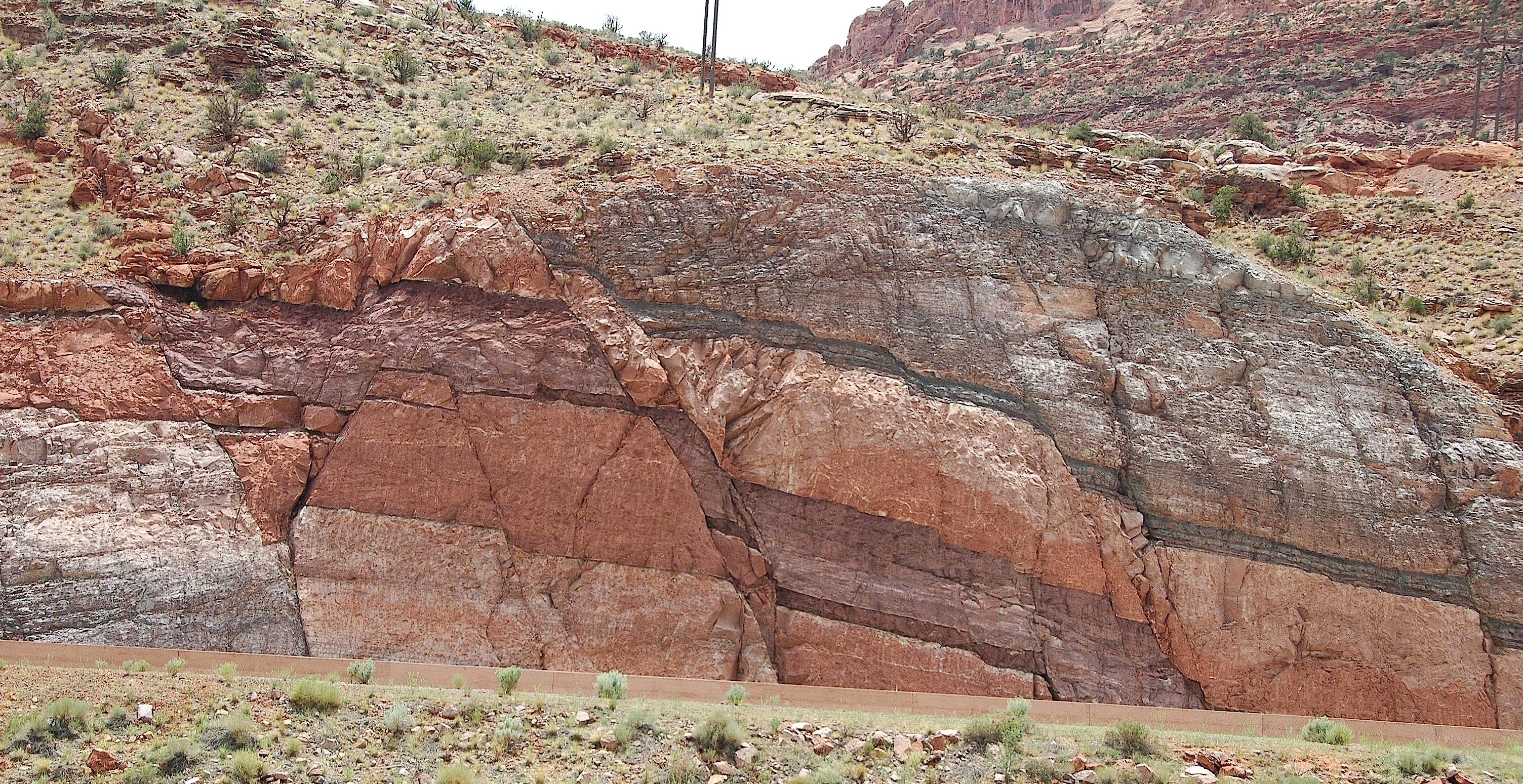 Fault planes displace the strata of a geologic succession

Tectonics (not to be confused with Plate Tectonics, which is the name of a global geological theory) explains the structures and behavior of the Earth’s lithosphere. Under tectonic forces, the lithosphere is deformed. The study of rock deformation at the outcrop scale is called structural geology. The main geological structures are faults and folds: broadly speaking, faults are the expression of brittle-type deformation; folds are that of ductile-type deformation. Stress applied to a solid (that is, a force applied to a mass of particles in contact with each other) produces its deformation or strain, which is its reaction, an adaptation to the new state of stress. Stress and strain are mathematically represented with tensors. The main stress, the one of larger magnitude, will create deformation, geological structures, oriented in space according to its direction of action. It is quite intuitive how the axes of the folds are arranged perpendicular to the direction of the main tectonic stress. The faults are arranged at an angle of less than 45° to the main tectonic stress. This causes a shortening in the direction of the main stress and an extension in the direction of the minor one. Faults are not to be confused with fractures (joints), which lie parallel to the main stress and perpendicular to the minor stress (along the plane containing the main and intermediate stresses); along fracture planes there is no slip, no displacement of strata. 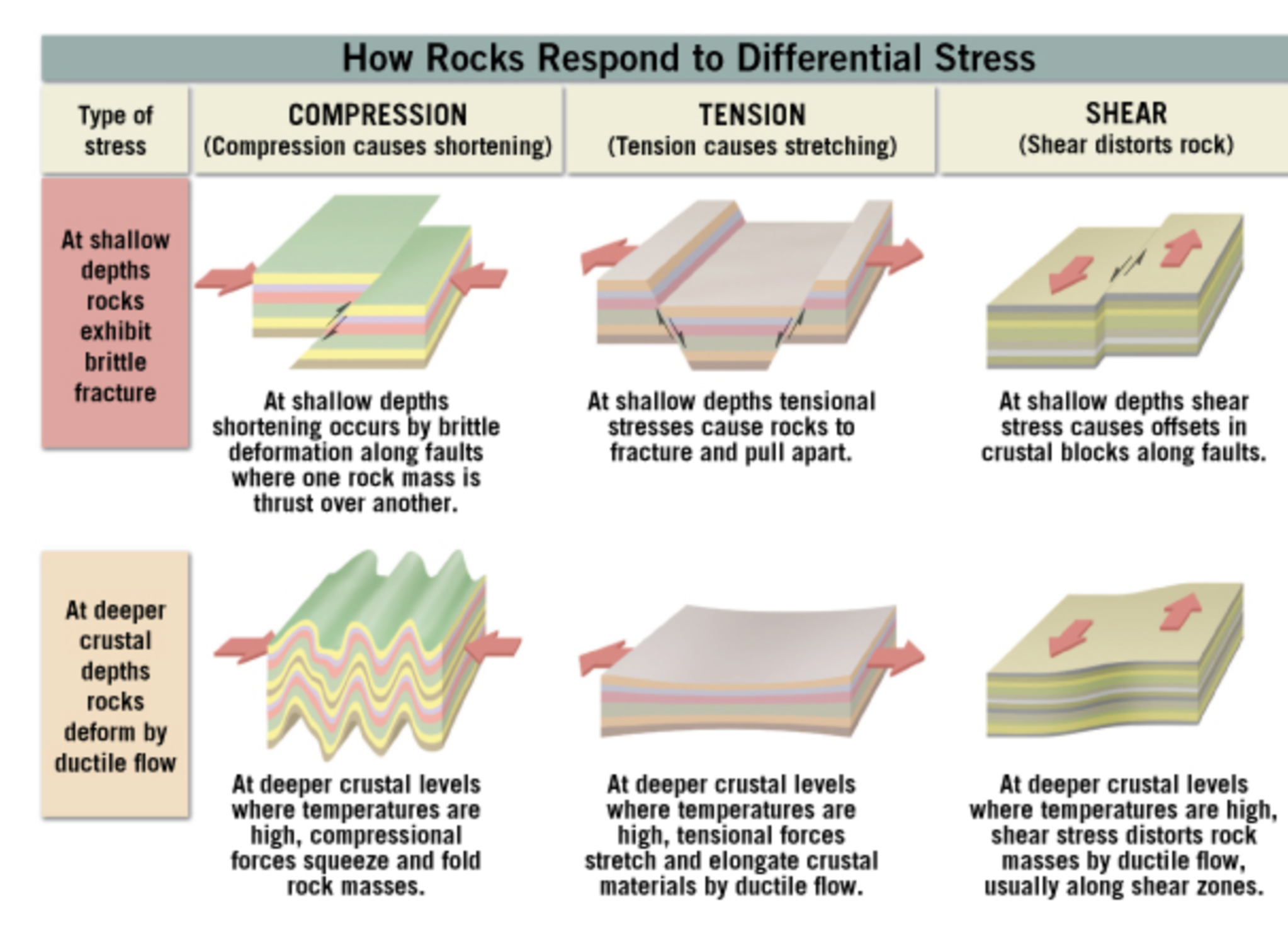 According to a model devised by E. M. Anderson in 1905, if the main or maximum stress (denoted by σ1) is horizontal and the minor stress σ3 is vertical, low-angle compressional or “reverse” faults will slide rock portions over each other causing crustal shortening in the main stress direction (below, center). A vertical main stress with a horizontal minor one will create high-angle extensional faults, also called “normal faults”, which will cause crustal extension (below, left) in the direction of the minor stress. More or less vertical faults that cause one block to move to the right or left relative to the other are called transcurrent or “strike-slip” faults (as opposed to reverse and normal faults that are both dip-slip faults); strike-slip faults are formed at less than 45° from the main stress (the minor stress is also horizontal) and have a motion that is called right- or left-lateral depending on the direction in which one block appears to move relative to the other (below, right).

In nature, faults and folds often appear together. Movement of rock blocks along fault planes causes folding of strata, so much so that we speak of folding caused by fault propagation (b) or by bending of a fault plane (a). 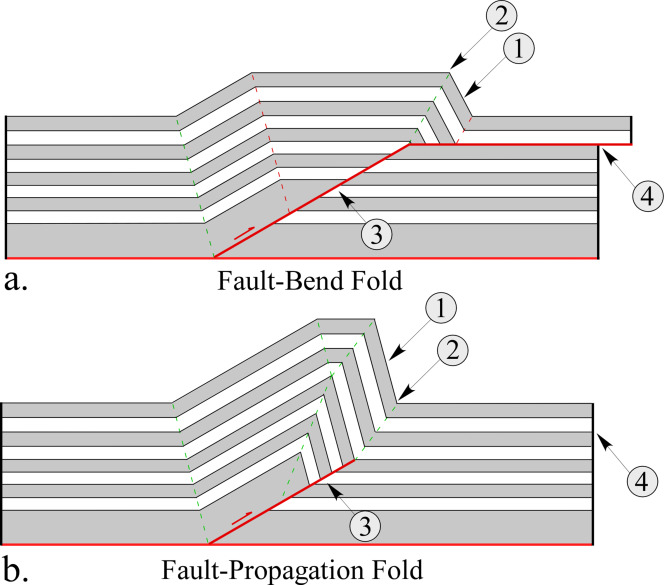 Slip along faults can cause folding

The various types of faults and folds are often found associated in the same area that may have undergone different tectonic phases over time. Normally the main type of deformation in a given area is one, but it can also generate secondary faults of different types, just as, for example, many folds and reverse faults are formed during extension processes. 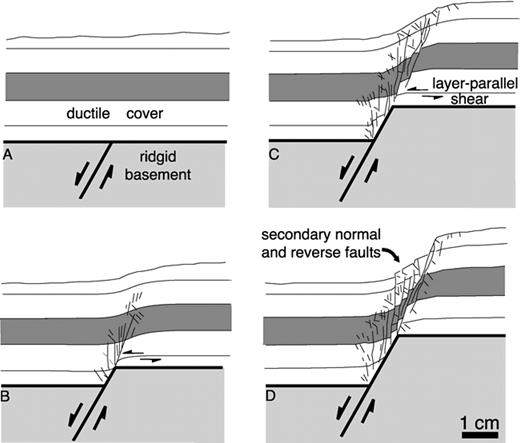 Different types of folds and faults can be found associated

There are generally three main types of tectonic styles depending on the type of plate margin involved, whether the area has undergone shortening at converging plate margins (compression), extension at diverging margins (spreading), or transcurrence at transform margins (lateral slip).

Folds can form as well-stratified rocks accommodate to the new state of stress. However, folding can occur only at suitably high temperatures and pressures (hence depths). Stratified geologic formations that are compressed (or stretched) at great depths can then react in a ductile way to the sustained stress by generating spectacular folds. 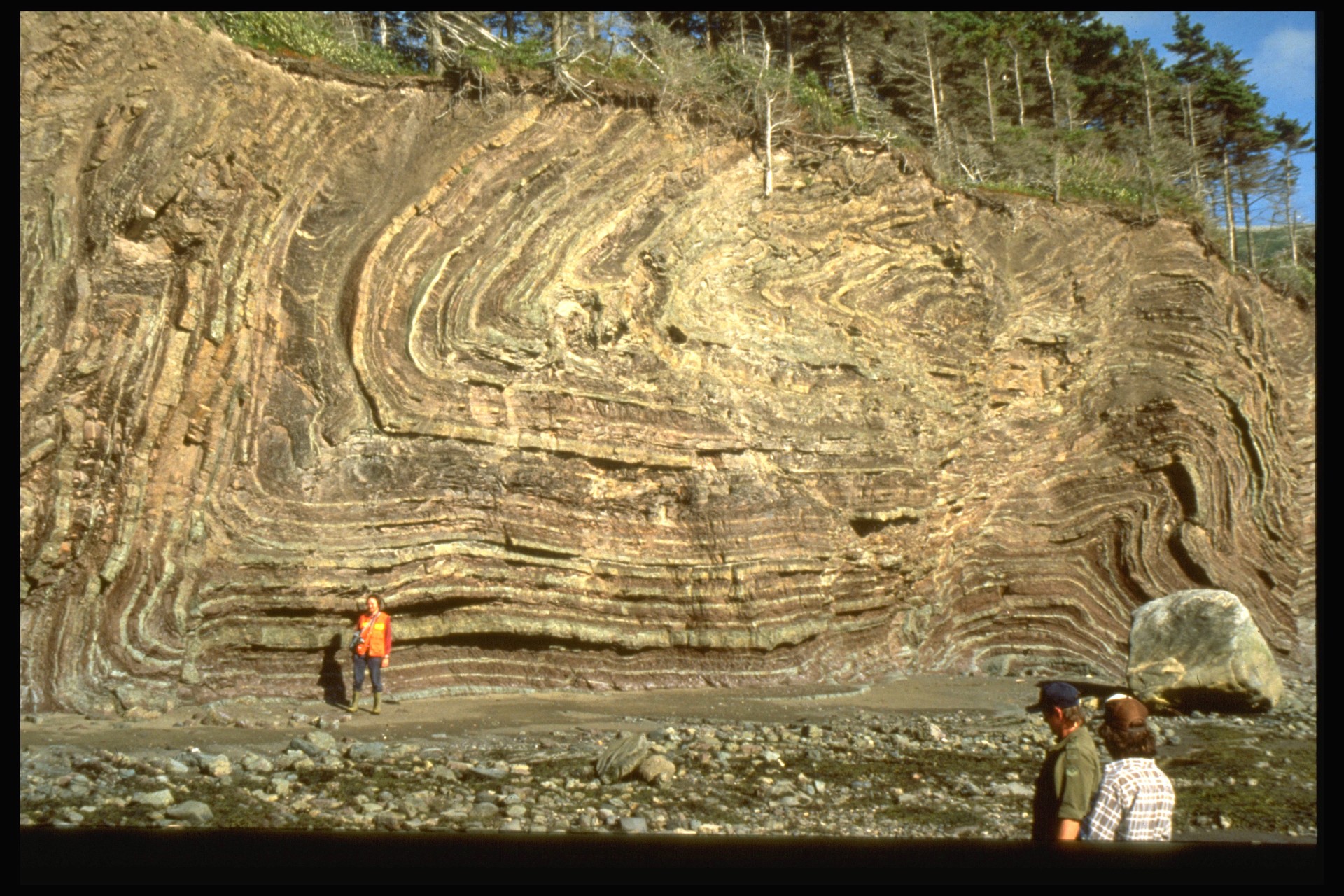 In general, under the same temperature and pressure conditions, a poorly layered or very thick layered rock formation has a stiffer behavior and will therefore tend to react in a brittle way by rupturing (generating faults and fractures); a finely layered rock formation has a more plastic behavior and will tend to deform in a ductile way by bending. 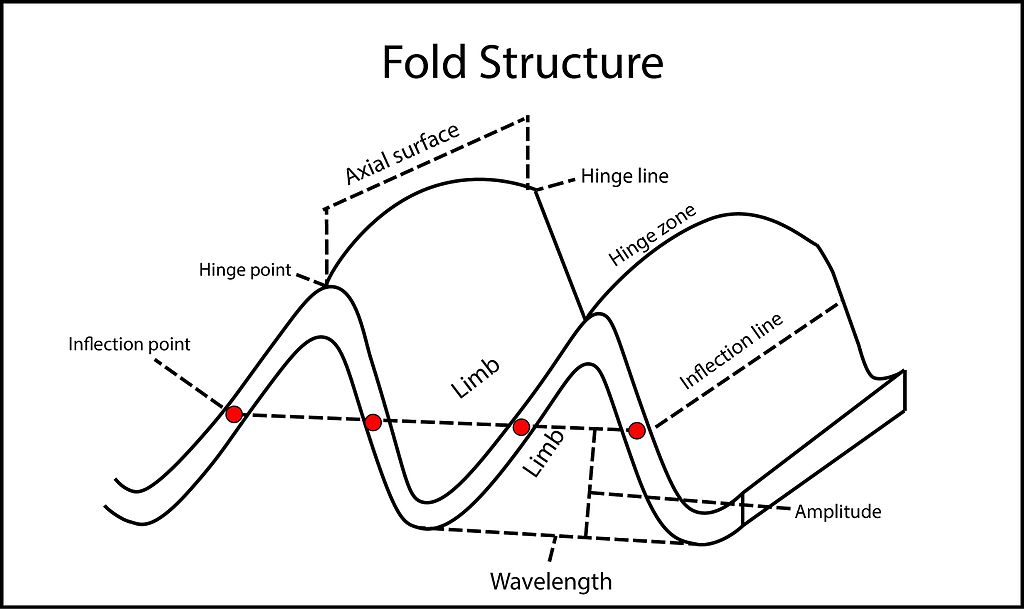