The most widespread element on planet Earth (the rock-made “solid” earth = crust, mantle and core) is oxygen. We always find it bonded to other elements, mainly silicon (the second most widespread) and aluminum in compounds such as silica SiO2 and alumina Al203. Our planet, like Mercury, Venus, and Mars, is made of rocks; silica and alumina contribute to different extents to the composition of rocks by forming crystal lattices whose voids host (electrochemically bonded) metals such as iron and magnesium, as well as alkali like calcium, sodium and potassium. Such compounds are called minerals. Therefore a rock is a mineral aggregate; this aggregation is not random. 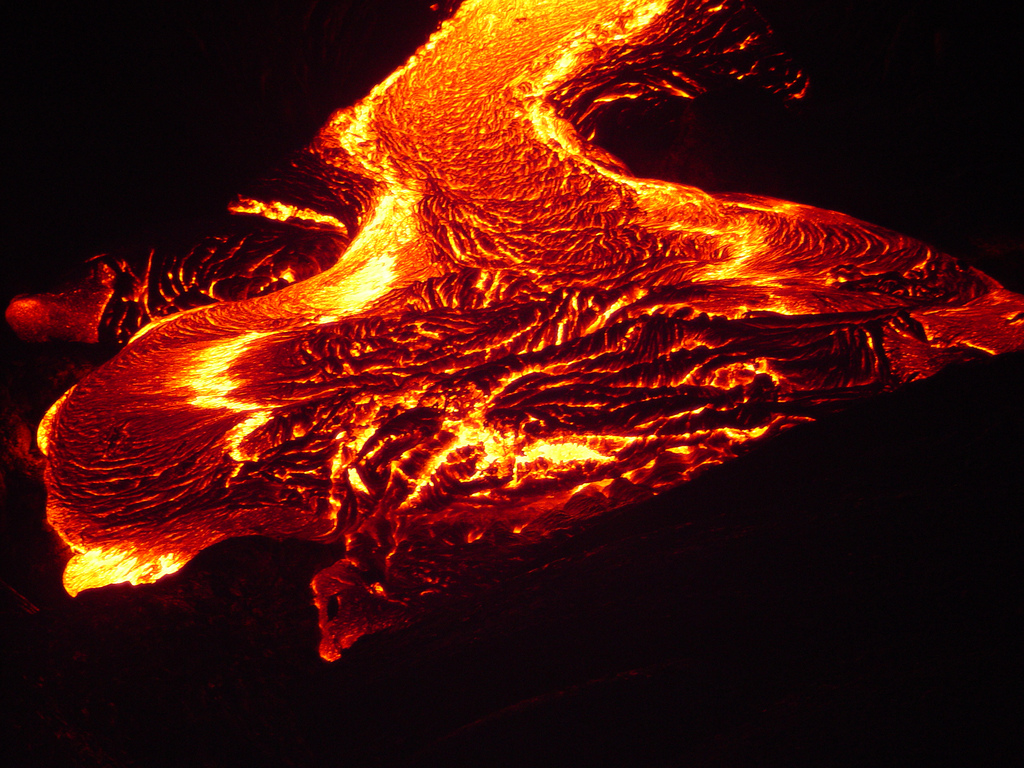 A molten rock is called a magma. If a magma comes to light during volcanic processes it is then called lava. Volcanoes, like earthquakes, are located in the same areas of the Earth’s surface: the plate margins. Together, they release huge quantities of energy. Some of this energy is kinetic, the rest is thermal (temperature varies between 600 and 1200°C); obviously, thermal energy is more important in effusive volcanic eruptions while the more explosive an eruption is, the higher is the kinetic energy involved. The explosive character of a volcanic event depends on the viscosity of the magma and on the presence of volatile elements (gases). Magma viscosity depends on silica and alumina content, as well as on pressure and temperature. 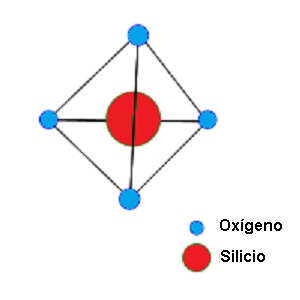 A high silica concentration causes an increase of viscosity due to the polymerization of silicon-oxygen bonds. Silicon has a 4+ valence, meaning it has 4 electrically positive bonds repelling each other; that’s why they orient themselves in space at the maximum available distance: along the 4 vertices of a tetrahedron. Each vertex bonds one of the 2 negative valences of an oxygen atom (SiO44-). These Silicon-centered tetrahedrons can distribute in space in different fashion forming the different minerals of the Silicates family. Isolated tetrahedra are typical of Olivines and Garnets (Nesosilicates), tetrahedron chains characterize Pyroxenes and Amphiboles (Inosilicates), overlapping tetrahedron sheets form Micas and clay minerals (Fillosilicates), while more complex 3D structures will give rise to Feldspars and Plagioclases (Tectosilicates). Silica tetrahedrons polymerization is counterbalanced by metal and alkali cations bonded to the oxygen and also by volatile elements such as water. 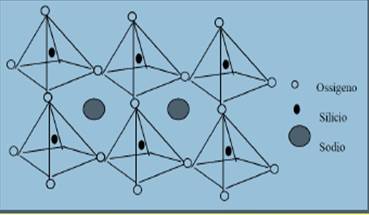 Water is present in magmas in the form of OH– ions. Water decreases the magma’s viscosity. As the magma approaches the surface, the pressure drop allows volatile elements to be released and the magma becomes more and more viscous. If the magma had high viscosity from the start, volatile release is more difficult. Generally, a more viscous magma, besides holding water within, moves with more effort causing pressure increase and consequently more explosive eruptions. But magma viscosity depends more on its composition (which affects factors like polymerization and the ability to retain volatiles).

Based on their composition, magmas can be divided into two main groups informally named “acid” and “basic” magmas, a nomenclature inherited from the early days. In chemistry, an acid reacts with a metal or alkali to form a salt: for example, the hydrochloric acid in contact with sodium reacts to form sodium chloride; sulforic acid would have formed sodium sulfate. In the past, scientist thought that silicates, the main components of magmas (therefore of rocks) came from the reaction of a so called “silicic acid” with metals to form salts (the silicates). This is not true, but silica-rich magmas are still called “acid magmas”, while silica-poor ones are called “basic magmas” (and this has nothing to do with their pH). Since a basic magma is less viscous due to a lower silica content (less chances for tetrahedrons to polymerize), it will be more likely to produce an effusive eruption. The rock formed from solidified effusive lava is often a basalt; that’s why those magmas are often called basaltic melts. 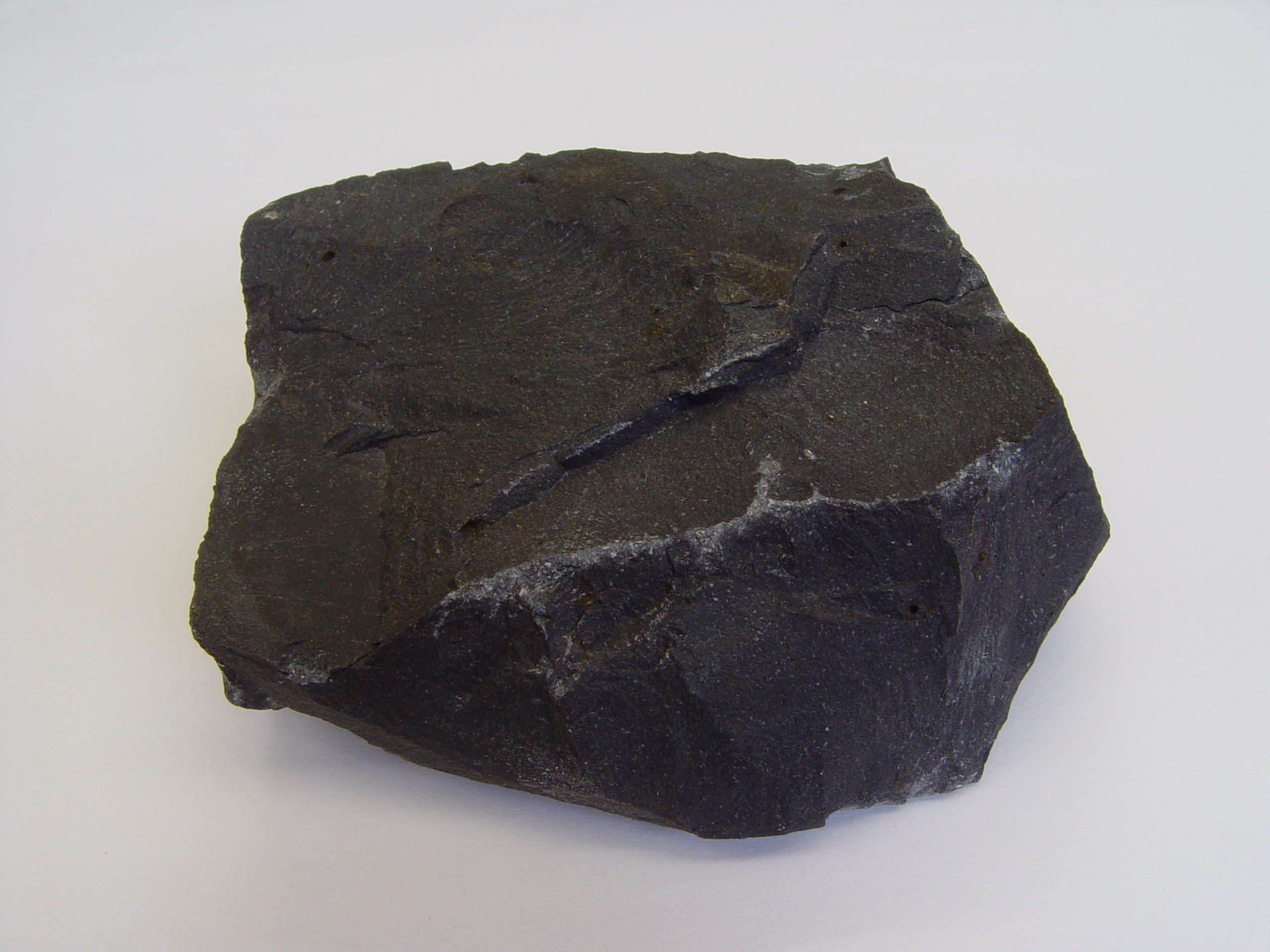 Basalt (at left – from “basaltes”, the ancient name of black Ethiopian rocks) is the primordial rock. The Moon has plenty of it in its plateaus that we call “seas”.  Some meteorites and the ocean floors are also basalt-rich. Basalt is primordial since other rocks, richer in silica, may be formed from it. The process is called fractioned crystallization. Even granites (from Latin “granus”: grain), among the rocks with higher silica content, derive from basalts. But also all sedimentary and metamorphic rocks are: in general, ferromagnesian elements, having a higher melting point, crystallize before others and are therefore separated from the original magma. The remaining part has a mineralogical composition that lies somewhere between granite and basalt. In that case the derived rock takes the name of diorite (from ancient Greek’s “split”, “separate”). The continuing process can bring to granite itself: the remaining magma will be silica rich, therefore more viscous and with less chances to see the light as lava. 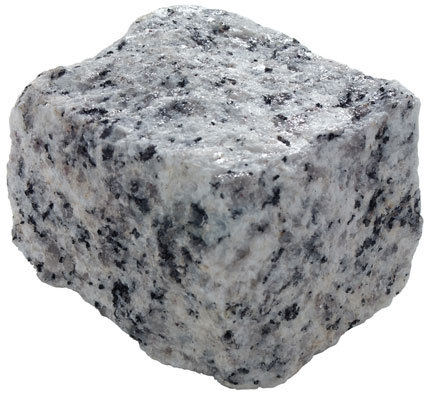 The more acid, viscous magmas are more easily trapped underground (intrusive rocks), forming granite batholiths also called plutons. Since they solidify slowly, minerals have the time to grow large enough to be visible to the naked eye, giving granite its typical look (at right). If granitic magmas come to light they do it in an explosive manner, generating pyroclastic flows and cinders. More rarely they form slowly moving lava flows we call ryolites (often they fill up volcanic conduits forming dykes). Like basalts, ryolites (from ancient Greek’s “water stream”) they do not show visible minerals, since they rapidly crystallize at contact with air or water.

In summary: basic magmas, with less silica, are more fluid and hot, but are poor of volatiles; when they surface as lava they form basalts (ex.: Hawaii, Iceland, Mt. Etna in Sicily); when trapped underground they form gabbroes (from Latin “glaber”: sterile land – ex.: ocean floors).

More acid magmas, with more silica, are more viscous and water rich; when they surface as lava they form ryolites (ex.: obsidian and pumice); when trapped underground they form granites (ex.: Yellowstone’s Half Dome).

Intermediate compositions give way to intermediate behaviors: lavas are called andesites (from the Andes); trapped underground they form diorites.

Magmas (and rocks) are made of iron, magnesium, sodium, potassium (and other) silicates. They differ by silica content. The magma’s mineral composition depends on the availability of silica SiO2. Silica reacts with metals to form the various kinds of silicates. Magmas with low silica content are also called undersaturated and can contain minerals that have few SiO2 molecules. Ideally, by adding SiO2 molecules to those “undersaturated” silicates, we could form other silicates with higher and higher silica content. If, after having formed the most silica-rich minerals there’s still some silica left, it could not bond to anything else so it will crystallize as quartz.