Strain can be reversible. The material (also a rock) can get back to its original shape after the stress has been removed. This type of strain is typical of materials which deform within their elastic field. The elastic field is where Hooke’s Law is valid (σ = Eε): in the elastic field a linear relationship exists between the stress and the resulting strain (E = Young’s Modulus).

In a stress-strain diagram the elastic field (the realm of Hooke’s Law), the direct relationship appears as a straight line (blue in the picture below). At a certain state of elastic strain called the elastic boundary, the material loses its internal cohesion along certain surfaces and undergoes plastic deformation (ductile flow), which is permanent, instead (green). At the plastic boundary, cohesion is lost along considerably wider surfaces, causing rupture, i.e. extremely large strain with no large stress needed (fragile deformation). 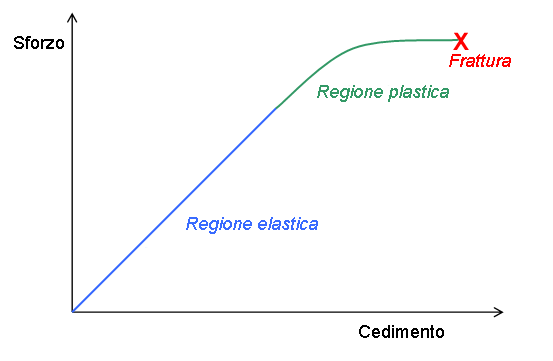 A material is called fragile when its elastic and plastic fields are narrow;

a plastic material has a narrow elastic field but an ample plastic region: it will deform considerably before rupture.

For comparison, a material is described as “competent” if it is more rigid, if it flows less easily and ruptures earlier than an “uncompetent” material.

Factors affecting the rheology of rocks.

The lithostatic load, the pressure exerted by overlying rocks, which increases 1 kbar for any 4 km of depth, increases the elastic boundary and enlarges the plastic field. This is why the geological structures known as folds are formed at depth, where pressure is higher. Fracturing is more likely at shallower depths.

Even temperature (which increases by 33°C each km of depth), combined to pressure and fluids occurrence, has more or less the same effect. In general, comparing the amount of fracturing and folding gives an idea of the depth at which deformation took place.

A long time of stress application allows to obtain a certain strain but with less stress. The change of deformation with time is called “strain rate” Δε/Δt. A material can undergo ductile flow if the stress is applied for a long time (low strain rate); the same material can behave in an elastic way or even rupture at certain strain rates. The moment at which this conversion occurs is called Maxwell’s Time.

The time elapsed from the initial application of stress and the beginning of deformation is function of the viscosity of a material. A very viscous material takes more time in reaching the final strain than a less viscous material. For example, water’s viscosity is extremely low because it deforms immediately as soon as a stress is applied. Honey takes longer, a rock even more…

For example, asthenosphere’s viscosity is estimated at around 1019 poise; the viscosity of the Earth’s mantle is lower than about 1023 poise. Water is nearly 0.01 poise, honey about 20.