During World War II, Henry Hammond Hess (1906-1969), professor of geology at Princeton, was the commander of a US submarine base. While serving on a ship equipped with tools for surveying the sea floor, he discovered undersea mountains with a flat top. He named them “guyot” after a Swiss-American emeritus professor at Princeton, Arnold Henry Guyot (1807-1884). It looked like their tops had been eroded away. At the time, this was explained with improbable undersea currents, as they were more than 2 km deep. After the war, Hess continued his research on guyots.

The first detailed map of the ocean’s floor was made by Marie Tharp, a geologist from Michigan who in the early 50s was working as general drafter at the Lamont-Doherty Earth Observatory of Columbia University in New York.Together with Bruce Heezen (below, with Tharp) she was working to locate downed aircrafts from World War II. 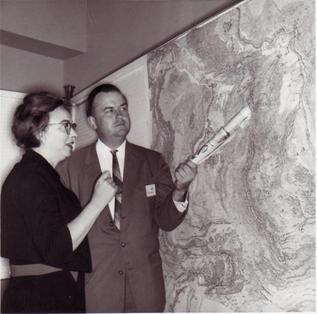 Heezen had collected lots of oceanic floor data working for years on the Observatory ship, the Vema; Tharp mapped those data (women were not alowed on board). She obtained the first Atlantic Ocean’s map, showing the mid-ocean ridge. Marie Tharp thought that it had something to di with Wegener’s theory of continental drift. At the time, Heezen himself dismissed the idea as “girl-talk”. But in the 60s, Tharp was able to join him on the oceanographic vessl Atlantis, of Woods Hole Oceanographic Institute. Together they collected data on the oceans seismicity and were able to see the connection between epicenters and the mid-ocean ridges. Then, even Heezen started to believe in continental drift. In 1977 they published the first complete map of the world ocean floor, drawn by the Austrian landscape painter Heinrich Berann: 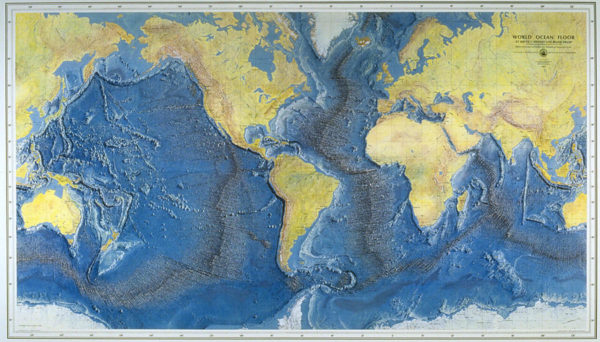 The map of oceans floor by Marie Tharp

After the discovery of the long volcanic rifts within the ridges of the world’s oceans, Henry Hess started to form his hypothesis of seafloor spreading. Hess thought that the cooling magma arising beneath the rifts would force the existing ocean floor to move away from both sides of the rift. Guyots would have been active volcanoes when they were close to the rift, where their tops would emerge and be eroded by sea waves; spreading processes would make them move away from their magma source and they would be extinguished and submerged under deeper and deeper waters.

In the same period, Robert S. Dietz (1914 – 1995), professor of geology at Arizona State, was carrying out oceanographic researches for the Scripps Institute of Oceanography. He was intrigued by the nature of the underwater Emperor Chain extending northwest of the Hawaii in the Pacific Ocean: Dietz figured the seamounts had been dragged as if on a conveyor belt. The modern interpretation is the aligned submarine extinguished volcanoes formed as the Pacific plate was passing over a “hot spot”, a place where a magma plume (originally thought to arise from the core, but has a lithospheric origin instead) is fixed with respect to the moving plate. 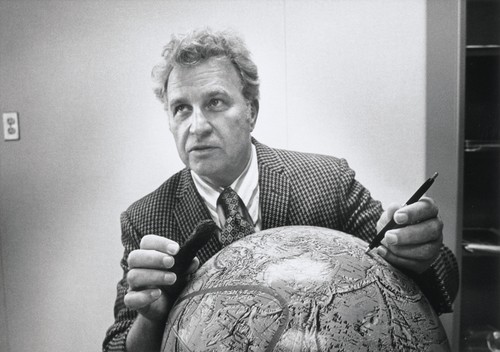 Studies carried out in Great Britain showed that the magnetic orientation (the direction of the fossil magnetic field) was deviated, depending on the rock’s age, up to 30° from today’s north pole position. Furthermore, the magnetic inclination was lower than expected, which led to the idea they had been formed at lower latitudes (the magnetic field’s flow lines are horizontal at the equator, almost vertical at the magnetic poles). Some suggested the magnetic poles had migrated, but similar studies on the North American continent showed data that perfectly matched the British studies: if you reconnected the two continents the two pole migration paths would superimpose (see picture below). 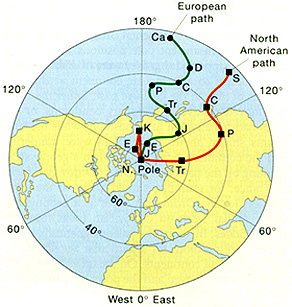 The poles appear to have migrated if we don’t account for continental wandering: continents have moved, not the poles

Therefore, the poles did not move; the continents did. Although those studies had been confirmed elsewhere (namely on the Deccan Plateau basalts in India), many scientists remained skeptic because the intrinsic imprecision of the paleomagnetic method. But paleomagnetic analyses on samples from all over the world demonstrated that if the pole did not migrate, they would certainly invert their positions: 9 magnetic reversals had been found in the last 3 million years. Later, researchers were able to extend that to 171 pole reversals in 76 million years.

In the 60s, many at the university of Cambridge, UK, were fascinated by the theory of continental drift. Among them were the doctorate student Fredrick J. Vine (below) and his supervisor Drummond Matthews (1931 – 1997, farther below), who both took part to an oceanography expedition along the mid Atlantic ridge. 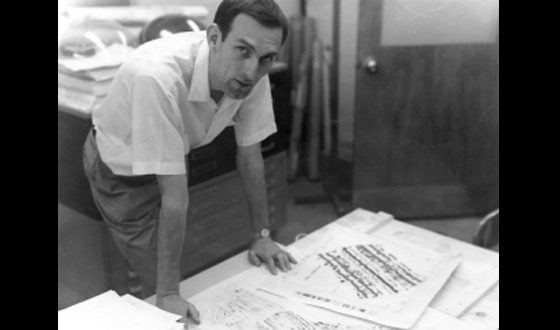 The ocean floor’s magnetic anomaly survey showed the same “zebra” pattern observed earlier in the Pacific and other oceans. They soon understood that the magnetic stripes were not linked to the magnetic field’s intensity but to its direction. This concept, with the seafloor spreading concept proposed by Hess, could explain the parallel magnetic strips: they were recordings of the polar reversals as the seafloor was spreading. Ferromagnesiac minerals in the magma coming out from the rift align with the current magnetic field. 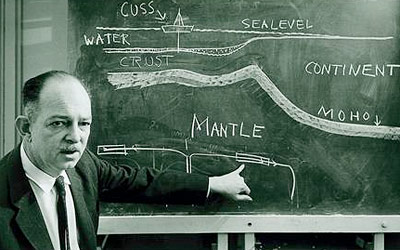 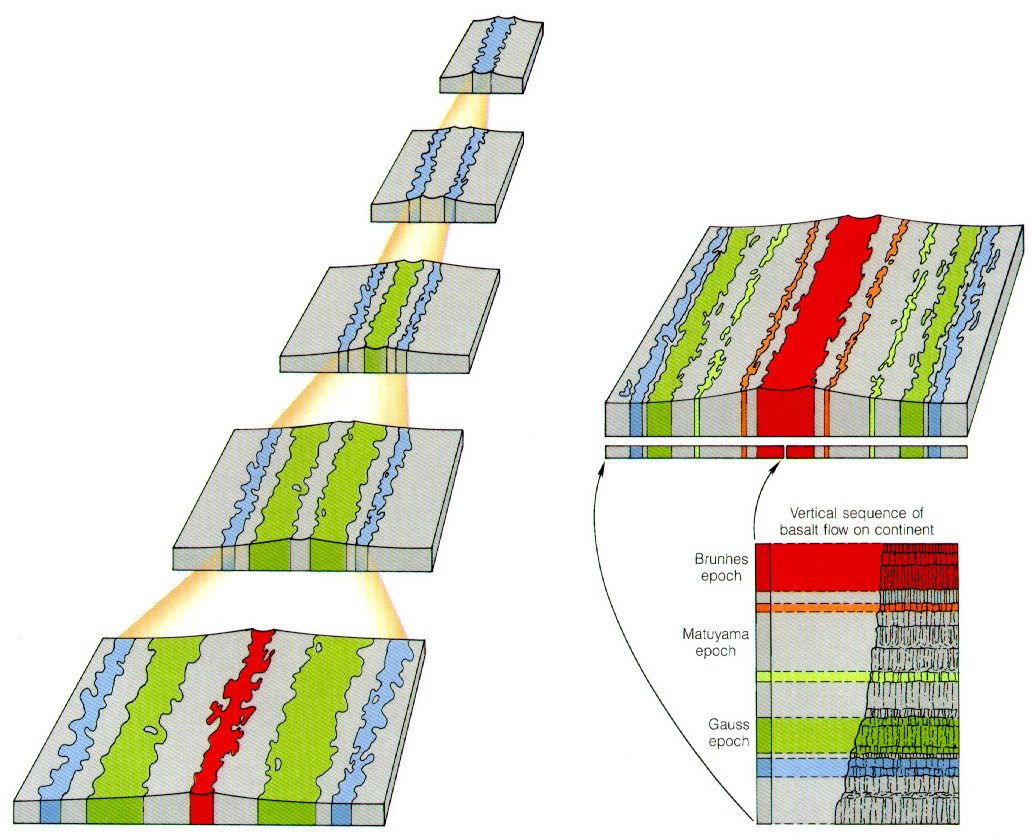 If Vine’s and Matthews’ hypothesis is true, it is also true that the oceans are spreading. In fact, paired stripes ages are also paired. The pairs are increasingly older as we go farther from the ridge. Also, the ocean crust’s thickness increases while its temperature decreases. But if ocean spreading is confirmed, does the Earth’s surface increase with geological time? Does the Earth inflate? Otherwise, if new material is created at ocean ridges, older one should be consumed elsewhere? Where does it happen?