The force is a property that is able to change the state of being in motion of any material body. The state of being at rest does not exist in the universe. Everything is in continuous motion (an object that is at rest from our point of view, is actually rotating with the Earth, which is revolving around the sun, which is revolving around the galaxy, and so on). Changing the state of motion means causing a change of velocity (=space/time); that change is called acceleration “a” in the classical formula (Newton’s 2nd Law):

In geology, the forces controlling the development of tectonic structures are mainly gravitational; secondarily, they are forces deriving from thermal variations within the Earth: they produce convective motion of huge masses displaced by different temperatures within the planet.

Force acting on a surface

The mechanical effect of a force depends on the size of the surface it is acting upon. The quantity of force acting per surface unit is called stress σ = F/A, which has therefore the same dimensions of pressure (cgs: ML-1T-2 = dyne / cm2 ; SI: 1N / m2 = 1 Pascal – just like for pressure). 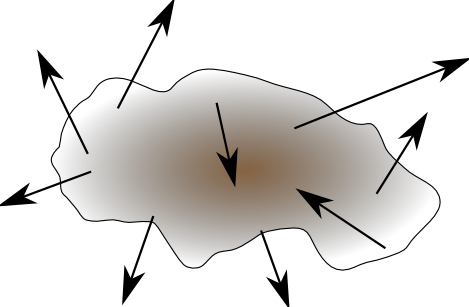 Forces acting on a continuum medium

In geology, we use a unit of measurement called “bar” or its multiple “kilobar”: 1 bar ≈ 1 atm = 105 Pa (average gradient: 1 kbar per 4 km of depth). A continuous distribution of particles is called a “continuum medium”. When a force is acting upon a body (which is actually a continuum) it is transmitted to any single particle of the body (the particles in a continuum are in contact with each other so they transmit the force to each other). These forces can be subdivided into contact forces and body forces.

Body forces are proportional to the volume of material (e.g. F = mg, where m depends on volume and density); contact forces depend on the area they act upon (e.g. wind resistance). Body forces have the dimensions of force x unit volume.