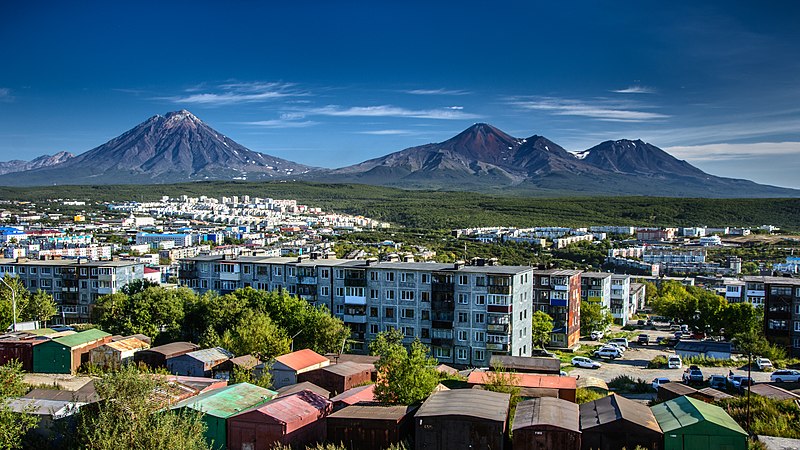 Not only mountain ranges reach high altitudes on Earth. Volcanoes also reach comparable heights (see Fuji and Kilimanjaro with snow-capped peaks) but they are not to be confused with mountains; their structure and genesis, as we shall see, is totally different. Volcanoes are formed by the accumulation of molten material escaping from underground. Magma, practically molten rock, rises from the depths of the Earth and comes to light in the form of lava flows or pyroclastic flows (fiery clouds that ravage everything they encounter like 500°C hurricanes at 60 km per hour). Magma, like the rocks it forms when it solidifies, is composed of silicates of iron and magnesium as well as alkaline minerals such as sodium, potassium and calcium. Silicon bonds with oxygen, the most common element in the Earth’s crust, forming silica. This in turn reacts with metals and alkalis to form various types of silicates that give rise, as they solidify, to the minerals that make up Earth’s rocks. If silica remains available it crystallizes as quartz. Magma can solidify slowly underground, giving rise to “intrusive” rock formations that we call batholiths or plutons (e.g., granites), embedded in the surrounding rocks that alter because of their temperature, which is around 5-600°C. Or magma may come to light as lava flows at about 1000-1200°C (like the basalts of Hawaii or Etna) or explosive eruptions with ignimbritic deposits (literally fire showers) or tephra, forming volcanic rocks called tuffs as happened with Vesuvius or Mount St. Helens. 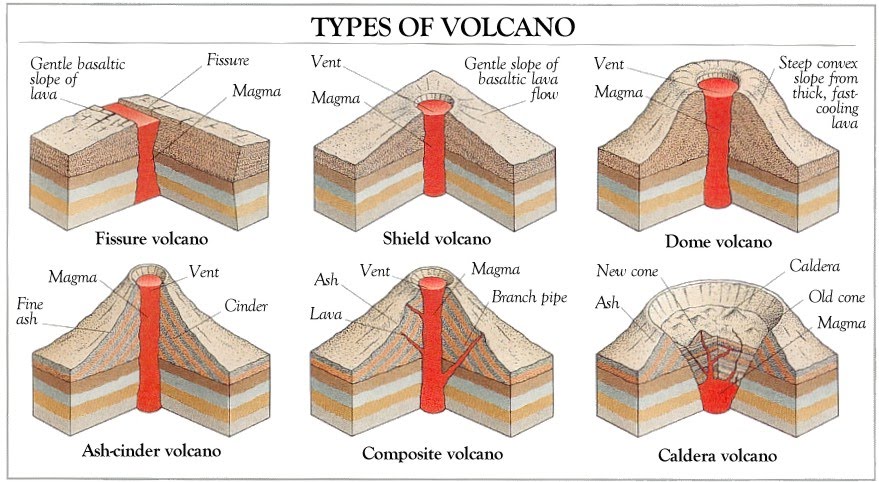 It is the composition of the magma that determines the type of eruption. Magmas rich in silica are more viscous and exert more pressure on the encasing rocks, partly because they are able to dissolve more volatile (gaseous) elements, mainly water and sulfuric acid, which as the temperature decreases as the magma cools, are released causing the pressure to increase. Once the pressure of the overlying rocks is overcome, it is the same bubbles of volatile elements that fragment the magma and drag it upward with them, just as happens when uncorking a bottle of sparkling wine or a can of soda.

In old nomenclature, magmas with a high silica content were called acidic, while those with a low content were called basic (hence the name basalt). An acid magma, being more viscous, tends to solidify at depth, forming intrusive rocks such as granites. If it comes to light it does so by explosive eruptions generating tuffaceous (ignimbritic) deposits of rhyolitic composition, the “effusive” name for granite. A basic magma, being less viscous, flows more smoothly and tends to form lava flows. The nearly double temperature also gives the magma more fluidity, and the lower presence of volatile components also makes explosive eruptions rarer. When a basaltic magma remains trapped and does not reach the surface, it forms intrusive rocks that we call gabbros. The type of composition depends on the origin of the magma. On average, Earth’s temperature increases by 30°C per km of depth. Pressure increases by 4 kbar per km. Under certain conditions of pressure and temperature certain mineral phases are no longer stable, cannot remain in the solid state, and melt, becoming magma. A melting substance normally increases in volume and decreases in density, so, being lighter, it tends to rise. Other types of substances can melt instead because the pressure drops for some reason, and at those temperatures that material must be in a liquid state. Magmas then form because changes happen in conditions in certain areas of the Earth. We are not talking about exceptional depths, but a few tens of kilometers (they do not come from the center of the Earth). Volcanic areas are often associated with volcanic chains (think of the Andes) and certainly also with seismic areas. We will see how volcanism and seismicity are two related features of our planet, thus often concomitant, but one need not imply or cause the other. Fluid, low-viscous, hot lavas tend to form volcanic edifices that are relatively low or at least wider than high, so-called shield volcanoes such as those that make up the Hawaiian Islands. More viscous lavas tend to build steeper structures such as cinder cones. The magma supplying the volcano can also change composition over geologic time and alternate between more effusive and more explosive episodes, forming so-called stratovolcanoes, whose deposits alternate between lava flows and ignimbrites and tuffs. The various types of eruption also depend on the composition of the magma and especially on the depth at which the so-called “fragmentation” occurs. The fragmentation depth is the point in the lava column in the volcanic conduit where the gaseous bubbles that form as it cools down are of such size and number that they can carry the magma column upward. 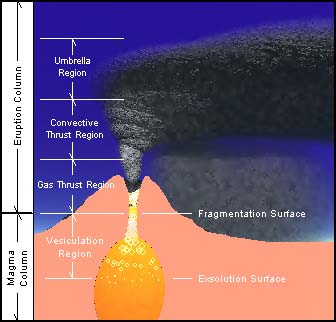 If this depth is so shallow as to be practically zero, the lava degasses to the surface and flows without major problems. If, on the other hand, the fragmentation depth is high, the magma column is carried rapidly upward and may even rise quite a bit above the surface in the form of an eruptive column, also generating a decompression wave that shoots violently out of the crater in all directions (base surge). At some point, the gases and semi-melted material expand (atmospheric pressure is lower than the duct pressure) and cool, increasing in weight. Gravity and atmospheric pressure itself do the rest, causing the column to collapse and fall devastatingly down the slopes of the volcano. This can also happen immediately upon exiting the crater if the fragmentation depth is not very high and therefore, once out, the eruptive column does not have the momentum to rise in altitude. If the fragmentation depth is very high outgassing may occur at depth and the magmatic mass may not be able to be ejected forming lava lakes. 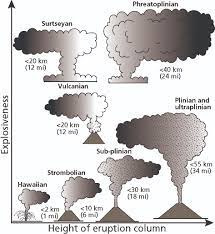 The various types of eruptions that can occur therefore depend on these conditions and are classified according to their characteristics. The classification used in volcanology is based on the increasing viscosity (silica content and thus increasing volatiles) of the magma that comes to light.

Strombolian eruption: still basaltic-type magmas but with a bit more silica content; the depth of magma fragmentation is a bit higher and sometimes bubbles burst causing lava fountains, often starting from lava lakes as it does on the island of Stromboli north of Sicily.

Vulcanian eruption: magma with a high silica content that moves with difficulty and solidifies forming plugs that are then blown off by gases that accumulate during cooling as observed on the island of Vulcano north of Sicily, Italy.

Plinian eruption: the magma is high in silica content but the depth of fragmentation is such that the column of magma is shot violently upward; the name comes from Pliny the Younger who in 79 BC observed and described from a ship in the Bay of Naples the devastating eruption of Vesuvius that destroyed Pompeii and Herculaneum (his father Pliny the Elder died trying to get close to the crater to observe the phenomenon).

Lava domes: a very high-silica and/or relatively cold magma is so viscous that it can come to the surface almost solid forming a lava dome in the crater itself (unable to move away from it); the viscous dome can on occasion collapse generating pyroclastic flows and lava flows; alternately the dome may also explode. Domes often form in craters that have undergone a Plinian eruption

Surtseyan eruptions: typically occur when a submarine volcano reaches the surface and lava instantly vaporizes water causing hydromagmatic explosions as observed on the island of Surtsey in Iceland; when water that comes in contact with a magma is instead contained in rocks (aquifers), by vaporizing it blasts off in a massive phreatomagmatic eruption.

Calderic collapse: one of the most devastating explosions in eruptions can be caused by the collapse of the volcanic edifice under its own weight; having emptied the magma chamber, the material accumulated on the slopes of the volcano no longer has support and collapses; sometimes only the base is left, which is called a caldera (it’s not a crater), as happened in the island of Krakatoa in Indonesia (explosion heard as far away as Australia). A lake and/or a new volcanic cone may form in the caldera if activity resumes.

Volcanism is proof that something “moves” inside the Earth, that enormous amounts of energy are released through volcanic eruptions. But seismicity also releases huge amounts of it. Whether the cause is the same?