We just saw how, in a magma with high iron and magnesium content – but low silica, the SiO44- groups bond those metals to form Olivines. Obviously, a magma can contain more other elements such as aluminum, that often leads to the formation of the AlSiO4– radical. This easily bonds to sodium to form Nepheline, potassium to form Kalsilite, or calcium to form Melilite. If there’s even more silica available when aluminum is also present, we can obtain AlSi2O64- or even AlSi3O84- radicals, which organize in the three-dimensional space in more complex lattice structures called “Tectosilicates” (below). After that, the excess silica crystallizes as quartz. 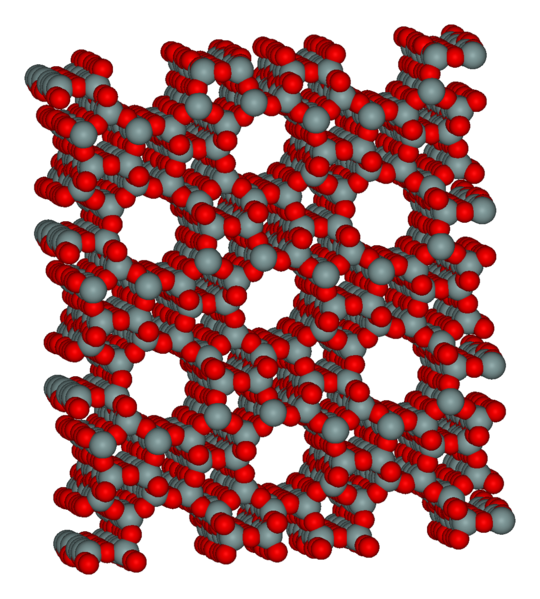 The three example minerals, Albite, Anorthite and Orthoclase, are part of an important group of Tectosilicates known as “Feldspars”.

Albite and Anorthite together form the “Plagioclase” group. They are respectively the sodic and calcic end-members of a solid solution which is formed, as calcium content increases, by the series: Albite-Oligoclase-Andesine-Labradorite-Bytownite-Anorthite.

Labrodoritic plagioclase and Pyroxenes (especially Diopside, as the calcium is present) are the main constituents of basalts. If originating basaltic magmas wouldn’t have had enough silica to form all needed Pyroxenes and Plagioclase, Olivines would have occurred (olivine basalts). In case of silica excess (though still in low percentages) we talk about tholeitic basalts (typical of oceanic crust). Particularly Plagioclase-rich basalts derive from high-alumina lavas, the less viscous ones, reaching temperatures as high as 1200°C. 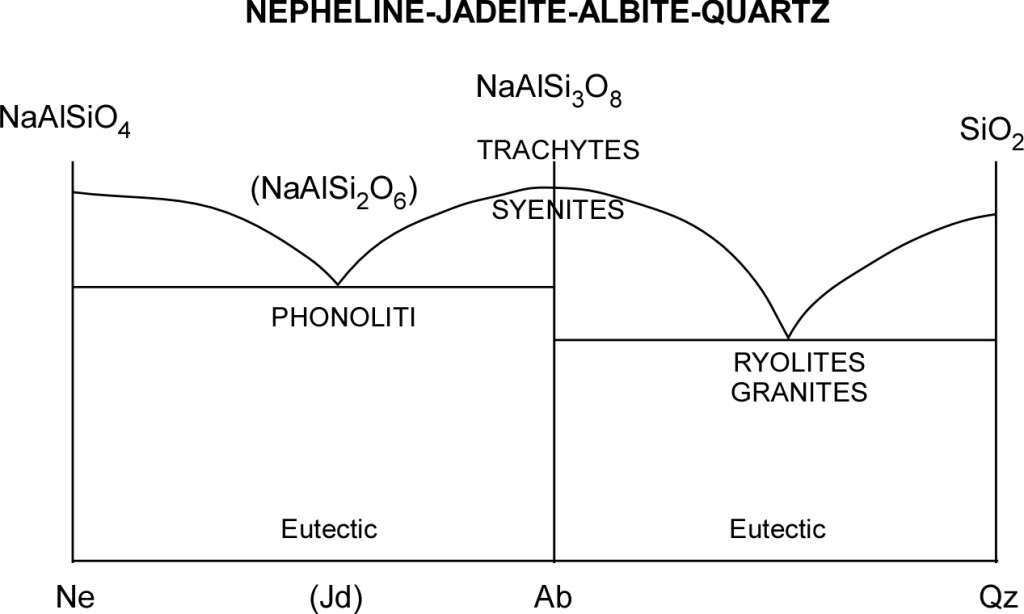 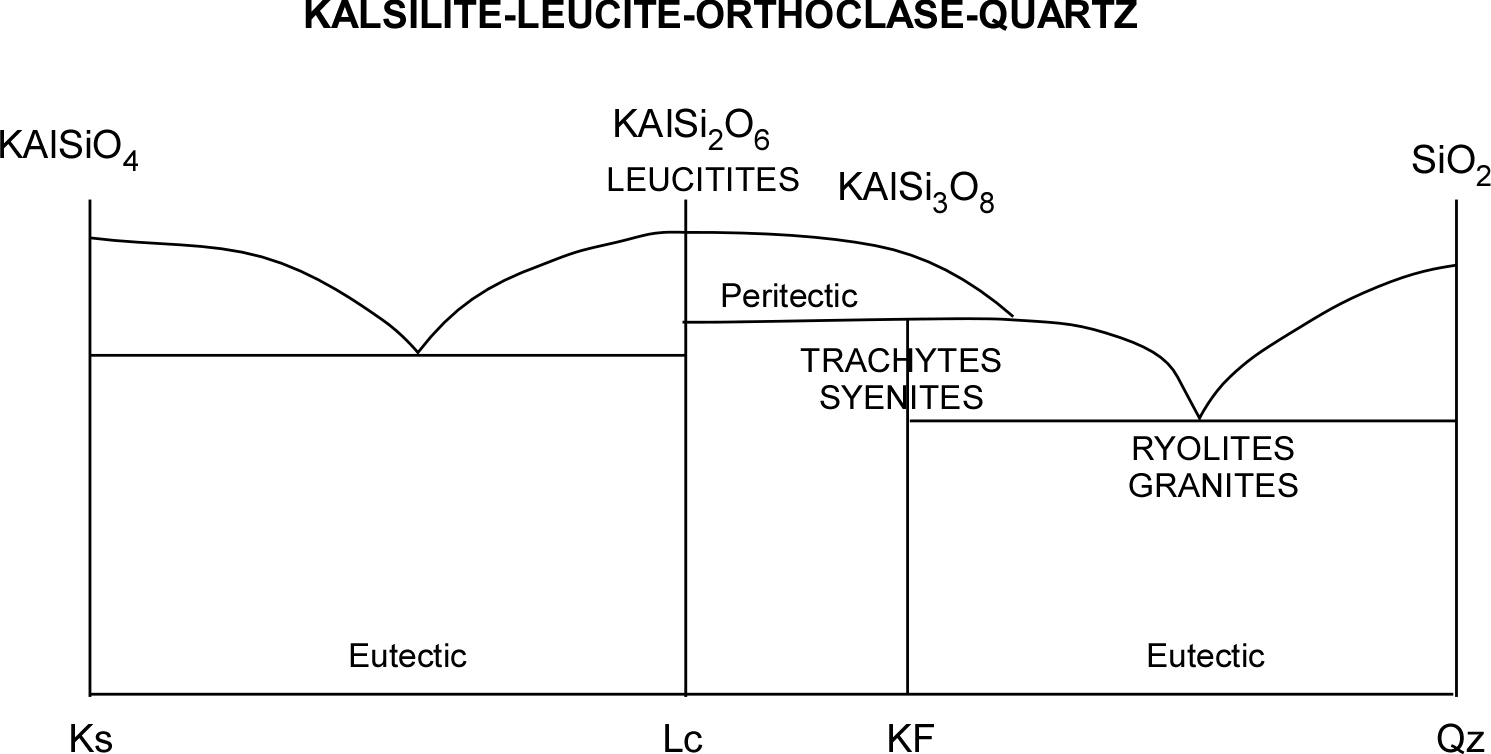 The above diagrams show curves representing melting temperature variations of one mineral as another chemically similar but not mixable one is added. In the horizontal axis (abscissa) we have the reciprocal percentages of the two minerals composing the mixture; in the vertical axis (ordinate) are the temperatures. Below the straight horizontal lines we have the solid mineral mixture at any compositional ratio: the segments represent the temperature at which those two minerals are always found solid. Between straight lines and curves we have the various percentages of melt and crystals of one of the two minerals at the various temperatures. The points where the curves intersect the straight lines are called “eutectics” and correspond to the percentage at which the mix solidifies (or melts) all together – readable on the abscissa scale.

See for example the Kalsilite-Silice pair in the left portion of the diagram above (see also A=Ks and B = Lc in the diagram below). A hypothetical melted mixture with prevailing Kalsilite would be represented by an abscissa value in the middle between the eutectic point and Kalsilite (X) above the “liquidus” curve. As temperature decreases, this point would vertically descend towards the curve before intersecting it.

At the intersection temperature (T1), the first pure Kalsilite crystal would be formed (1). Further temperature decrease would cause continuous composition changes (following the curve towards the eutectic point – 2 and 3) while Leucite crystals are also forming. At point 2, the length of segment “a” is proportional to the quantity of remaining liquid, while the length of segment “b” is proportional to the percentage of solids formed. At point 3, the segment “c” represents the still liquid portion, while “d” is the crystallized portion (the graph allows following the crystallized portion’s increase while temperature decreases). Once the eutectic point (TE) is reached, Leucite crystals will form together with Kalsilite ones, in a proportion equal to that corresponding to the eutectic point (E). The first Kalsilite crystals will have the chance to achieve a complete shape while they are immersed in the melt. The last Ks crystals that form together Lc crystals will have to fill the available space while crystallizing from the few remained magma in the interstices.

The potassic Feldspar or “K-Feldspar” crystallizes as Sanidine at high temperaure. In rare potassic magmas common only in the Mediterranean area, silica is not enough to form Ortoclase, so we often find Leucite in its place, its undersaturated counterpart – if not even Kalsilite. For this reason, those lavas are called leucitites although they resemble basalts. Ancient Romans have extensively used leucitite flagstones as road pavements. More undersaturated magmas generate trachytes (effusive) and sienites (intrusive). The same reasoning applies to the Nepheline-Jadeite-Albite system that generates the phonolite series.

In the more “acid” magmas, that generate mainly ryolites at surface and granites underground, the abundance of silica (normally 20-40% more than basalts) allows the formation of high SiO2-content minerals such as the Feldspars. Both sodic and potassic varieties occur (Albite and Orthoclase); the few calcium available can be found in Plagioclase (Oligoclase). Iron and magnesium are reduced to traces and are found in dark “accessory” minerals such as the Augites (complex-content Pyroxenes) and magnetite, responsible of the granite’s typical dotted look. The excess silica crystallizes as quartz.