Analyzing the distribution of mountain belts and observing the shape of the western and eastern coasts of the south Atlantic, the German meteorologist Alfred Lothar Wegener (1880-1930) suggested that the African and South American continents had been drifting away; resistance to the drifting west of the Americas would have generated the Rocky Mountains and the Andes. A few years after Mohorovicic discovered his namesake discontinuity and a few years before Gutenberg located the Earth’s core, Wegener presented his theory in 1912 during a couple of conferences about the origins of continents and later in his 1915 book “The origins of continents and oceans”. 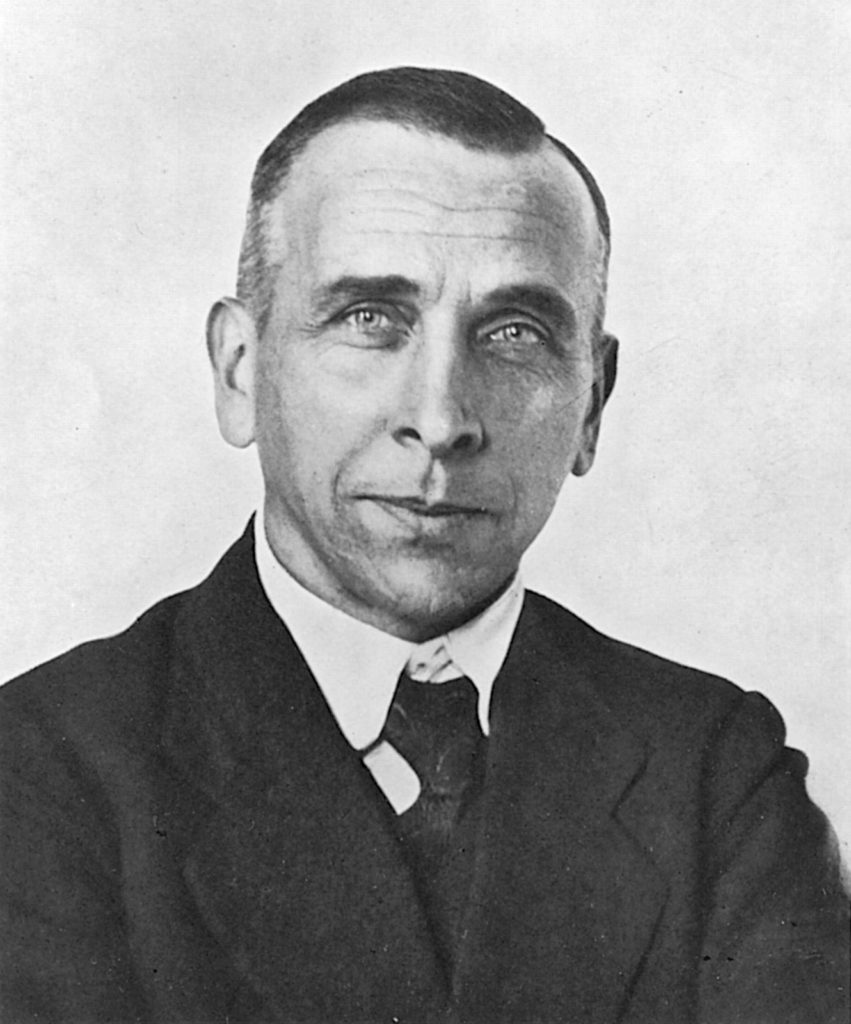 According to Wegener, during Paleozoic and for most of the Triassic (that is up to 225 million years ago), emerged lands were a whole large mass that he called Pangea (all-earth). At the same time, the water mass was a continuous, immense ocean he named Panthalassa (all-sea). Around 200 million years ago, the Pangea would begin slowly breaking in two pieces: north of the equator was Laurasia, comprising North America and Eurasia; to the south was Gondwanaland, divided from Laurasia by an ocean called Tethys. Slowly, the Laurasia and Gondwanaland supercontinents broke up in smaller pieces. Laurasia drifted to the north, while the South America-Africa block separated form the Australia-Antarctica block. 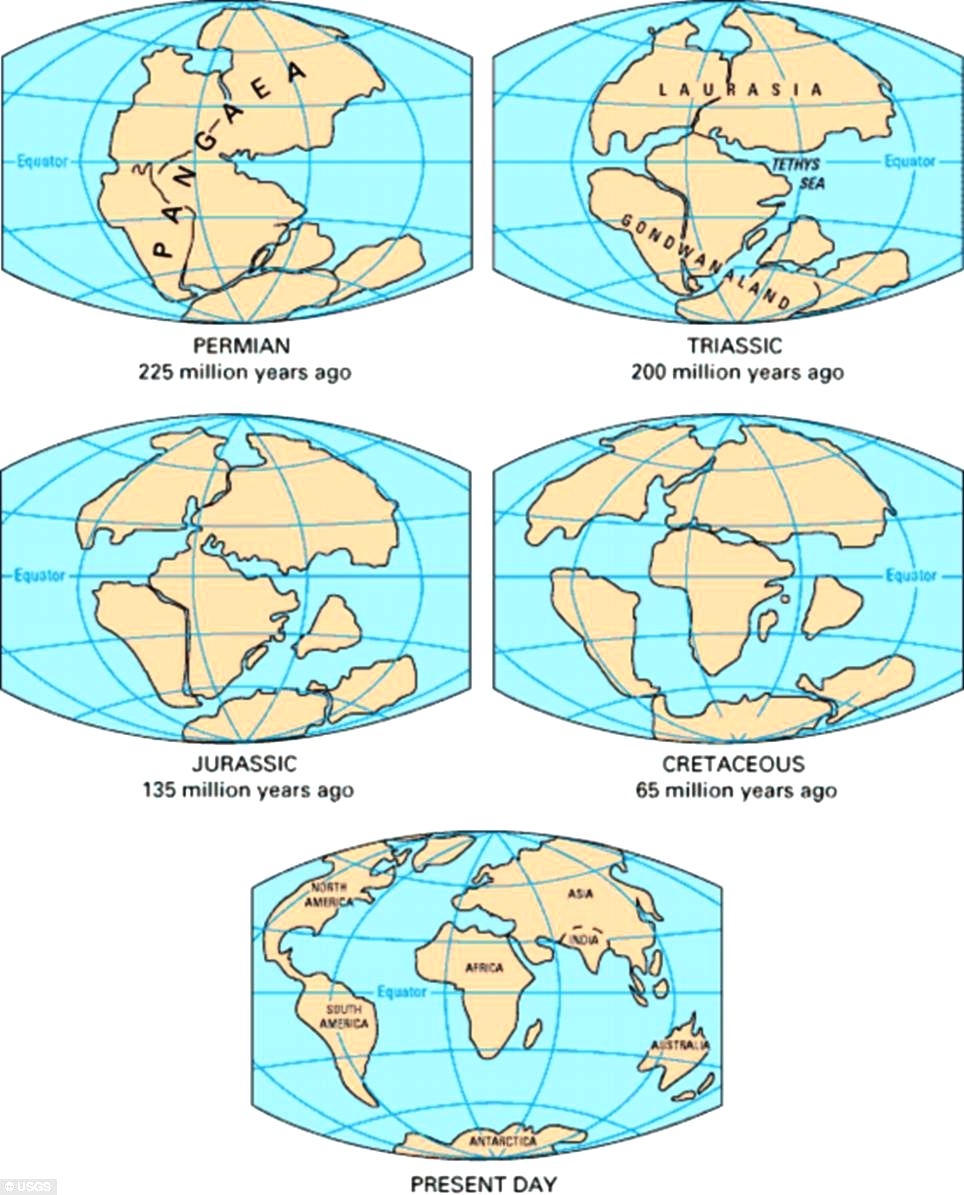 Break-up of the supercontinent Pangea

The idea of continental drifting, as Wegener (above) writes, “…arose as early as 1910. Examining the geographical maps of the two hemispheres, I soon had the impression of concordance between the two Atlantic coasts, but I thought it improbable so I quickly dismissed it. In the autumn of 1911, after having read a report on an ancient continental link between Brazil and Africa, I learned about the the achieved paleontological results, which I didn’t know earlier. That encouraged me to examine geological and paleontological data about the matter: now the observations made were so evident that I became convinced that the idea was fundamentally right. I publicly referred that idea for the first time on January 6, 1912 during a conference held by the Geological Society of Frankfurt am Main about “The origin of continents and oceans on geophysical bases”. A second conference followed on January 10 about “The horizontal displacements of continents”, which I held for the Society for the Progress of Natural Sciences of Marburg“. Opposition to Wegener’s ideas was fierce at the beginning. 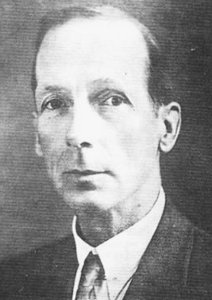 Few geologist accepted them, among which the South African Alexander Du Toit (1878-1940), who suggested the existence of two supercontinents in place of Pangea: Laurasia, comprising North America and Eurasia, and Gondwanaland, union of South America, Africa, India, Australia, and Antarctica, separated by the Tethys ocean. Du Toit spent months in South America noting the affinity of animal and plant fossil species, plus the perfect correspondence of geological sequences which contained them on the African continent. It was hard for him to believe that a continent had been there once, connecting South America and Africa in the geological past – and without leaving any trace. In 1937, seven years after the passing of Wegener, he dedicated his book “Our Wandering Continents” to his German colleague. He illustrated his supercontinents theory describing Gondwanaland in great detail, providing great amounts of data, even more than Wegener himself. His critics went to the extent of making a fool of him. 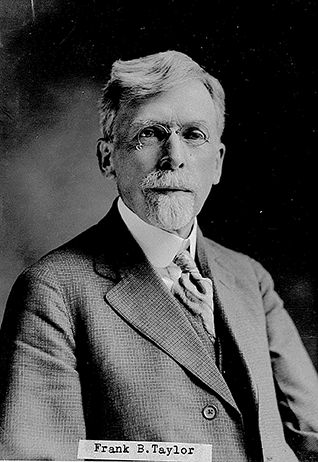 Before Wegener, in 1910, the American geographer and geologist Frank Bursley Taylor (1860 – 1938) published an article claiming the traditional contraction hypothesis was inadequate to explain the distribution of Tertiary mountain belts and their young age. He imagined a huge translation of the Earth’s crust from northern Asia to its periphery. His north-to-south crustal translation concept was referred to Greenland, which he believed was a large and old massif from where Canada and Northern Europe had detached along huge trenches (below). 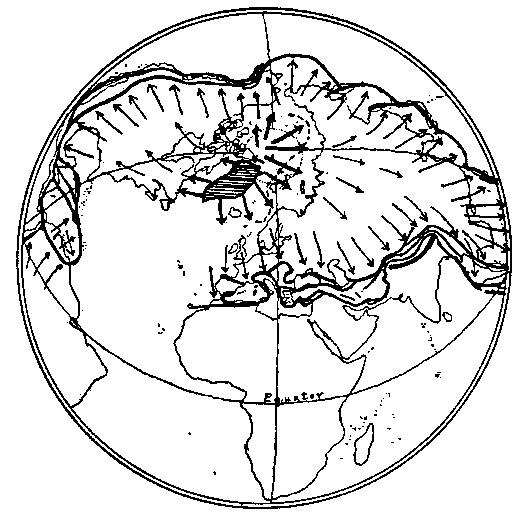 Taylor’s thesis lacked one important foundation: the mechanism causing the displacement of continental masses. The hypothesis of tide forces when the Moon had been captured by the Earth during Cretaceous must have seemed whimsical to Taylor’s contemporaries. But his work was an important contribution to Wegener’s theory.

Wegener provided various evidences in order to support his theory from a scientific standpoint.

The statistical analysis of Earth’s topography highlights two main elevations corresponding to continents and ocean floors. This is in agreement with the notion of two different crustal types. Isostasy requires a fluid-like underlying layer, even a very viscous one. Wegener maintained that if continents can move vertically it was also possible they moved horizontally – provided sufficient forces were available. Proof of their existence were the horizontally compressed beds in all mountain belts, from the Alps through the Himalaya to the Andes.

Continental margins fit almost perfectly like in a mosaic. Geological affinities pair Norway’s Paleozoic mountain belts to those of Greenland and Canada. The same goes for Western Africa’s and eastern South America’s rock formations. Wegener gave great importance to the correspondence between North America’s and Europe’s moraine deposits from glaciers’ toes; it is a clue of a delay in the final separation of the two continents until Pleistocene. Wegener writes: “It is just like putting together parts of a newspaper that had been tore apart: after fitting their edges we must check if any single printed line continues from one side to the other. If it is so, we can’t help but decide they were once joined“. 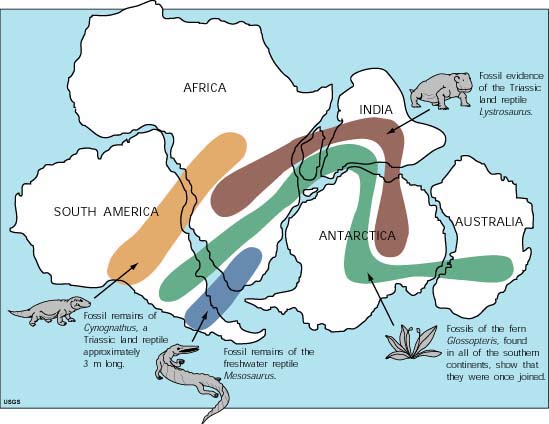 At the beginning of the century, the most influential paleontologists used to explain flora and fauna similarities between different continents by imagining huge land masses bridging the gap during Mesozoic. Those so-called continental bridges would have eventually collapsed into the ocean. After having deeply investigated the current geological distribution of various organisms, Wegener strongly dismissed the idea of continental bridges, based on geophysical evidence and on the isostasy principle, that would make it impossible for them to sink into the ocean and disappear. The only plausible conclusion was that the continents were once joined in a supercontinent and later they separated by moving laterally.

Wegener also analyzed the distribution of past climates. In South America, Australia, Africa and India, he found Paleozoic sedimentary rocks deposited in glacial environment, the tillites (fossil moraines); in Siberia, North America and central Northern Europe he found fossil coal of the same age as the tillites but from typically tropical plant remains. The particular distribution of those rocks could have been only explained if at their deposition all landmasses under the glacial climate were joined, as the tropical landmasses must have also been.

Physical evidences supporting Wegener’s genial intuition were poor: he attempted to propose some mechanisms as the cause for continental drift, such as the resulting force between the gravitational pull towards Earth’s center and the centrifugal force due to its rotation – too weak for moving continents. 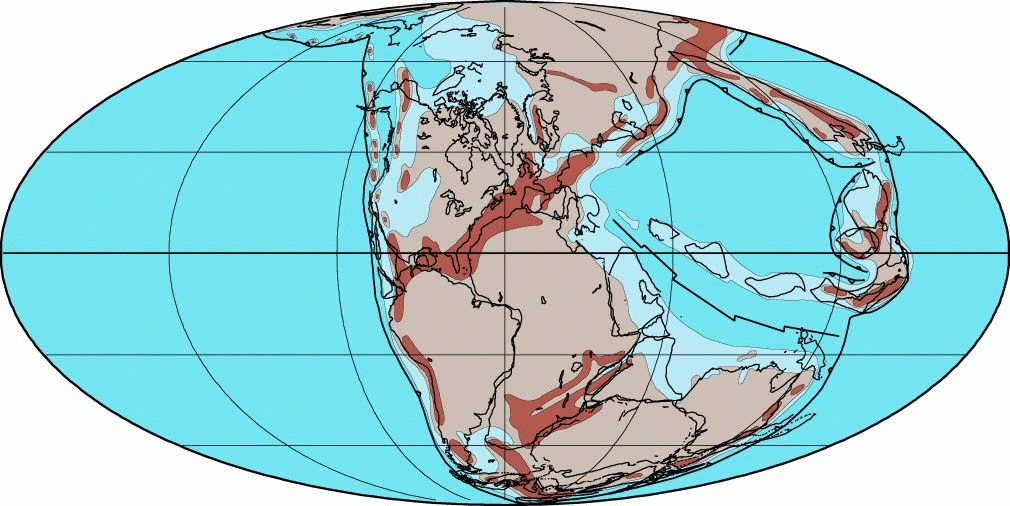 Wegener himself admitted: “…The Newton of the drifting theory is not born yet … probably the complete solution to the problem of motion forces is yet to come by a long time; it would mean unraveling a tangle of independent phenomena whose cause and effect are often hard to tell.” The strongest objections underlined the incompatibility of the continental drift with the accepted ideas about the crustal structure of the time. If the continents were “sial” rafts made of silica+aluminum floating on “sima” made of silica+magnesium, what huge force would have been necessary to exceed the enormous friction along the Earth’s surface? The British geophysicist Harold Jeffreys calculated that Wegener’s mechanisms were too weak to exceed the friction between the continents and the underlying crust.

Therefore, how can a continent move across an ocean floor?