Hi-Fi is the contraction of “High Fidelity”, which relates to the reproduction of Music in a way that resembles the real experience. The capital letters are mandatory since we’re talking about a cultural subject, if not science or philosophy (well, sometimes…). After the boomy 70s and a rebirth around the 80s and the early 90s, HiFi suffered the advent of Home Theater systems and compressed music.

But the dignity of High Fidelity stems directly from Music, with a capital M since it is an ancient and noble form of art. The passion for High Fidelity has only sense if it derives from the passion for Music, the “real” Music, commercial phenomena aside. Otherwise it is only a passion for the electronic instruments that reproduce music or, even worse, an obsession – an expensive one, for the electronic performance of a given component or brand, rather than for the main reason we spend our money for: listen to quality Music  on a quality HiFi system.
This absolutely does not mean an expensive HiFi system just a few can afford. High Fidelity is today available to anyone not too close to the poverty threshold. We’re not talking here of an essential good, nonetheless it is hard to find a real HiFi system even in wealthy houses. You have much higher chance to find a Home Theater system there, with all its 5 to 7 loudspeakers, or a compact “stereo” set with CD/mp3 player, tuner and speakers in one box.
Only two stereo channels
I want to strongly point out here that High Fidelity reproduction involves a stereophonic system.  The stereophonic principle is based on two properly designed loudspeaker systems capable of reproducing the sound of real instruments and their relevant positions in space in a way that is very close to reality. 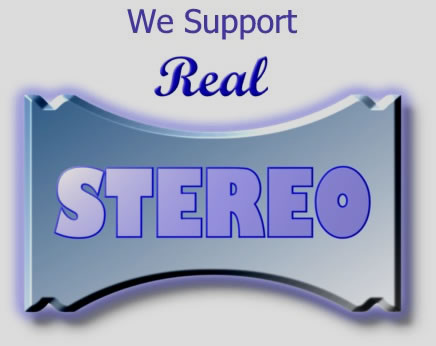 For decades this configuration has been working optimally, reaching much satisfying levels for millions of users. In the past an attempt was made to propose quadrophonic systems, with poor results. Since a few years ago we have up to 7 channels at our disposal in Home Theater systems and some audio recordings attempt to exploit those characteristics for a more involving musical experience. Like many others, I’m not convinced about it, and “many” includes professional people with much more awareness of the facts than me. With a good High Fidelity stereophonic system we could enjoy a movie far better than with a HT system of the same price.

Now imagine a band of 4 or 5 musicians playing in an auditorium hall. Two properly designed microphones can be placed in a way that they can collect the sound information much like our ears do. The two Stereo channels play back the sounds collected by the two microphones. If the loudspeakers are properly positioned, the system can recreate, with a certain approximation, an effect similar to the live experience, including the players’ position and the typical sound of the hall they were playing in. This is High Fidelity. This kind of listening experience is a pleasure and to achieve it we need the proper tools, beginning from the right listening room.
But is there any room for High Fidelity today?
Now picture this scene: I young music fan locks him-/her-self in a room, picks up a vinyl record – yes, those 33 rpms – he/she opens it, slips it out of the paper sleeve paying much attention to do not touch anything but the rim with his/her fingers, and brushes the dust away. At this point he/she carefully puts the record on the platter, starts the turntable and lets the stylus gently descend at the beginning of the grooves of side A. At this point he/she turns up the volume knob and goes to sit in his/her chair, properly placed at a distance and between the two loudspeakers. Only then, he/she can enjoy, maybe with eyes shut, the mental show triggered by his/her own ears: he/she can almost see, touch his/her idols as if they were there, playing in that very room. Than side A is over, the young boy/girl gets up, stops the turntable, removes the record, cleans side B and goes on listening to the second part of the artist’s work, with no interruptions, as the authors originally conceived it, as a whole, a logical succession of tracks and emotions, enjoyable only by listening to the entire album. Doesn’t it seem a scene form the past?

Today, in our frantic world, it is hard, if not impossible, to find a free hour to dedicate to music listening exclusively. We can’t even find a 15 minutes. Today we listen to music distractedly, while we do other tasks, while we prepare dinner, while driving, walking or taking the bus. There’s nothing bad in doing so. But in this way we lost the chance of experiencing music in a more natural way. Today we use a lot of compressed formats. such as mp3 or similar, that allow us bringing around an entire record store in our pocket. Digital music is very useful and easy, I’m using it too. But one should know that compressed digital music has nothing to do with High Fidelity.
Digital frantic
I will never stop comparing photography and HiFi: digital photography has done great things, but we are losing the relationship with the picture we once had thanks to analog photography, thanks to the film: the first step was choosing the right film for the occasion; then, before shooting, we used to (had to) think, since we didn’t have many possibilities. A “thought-over” shot contains much more emotions and better represents the feelings we wanted to convey by shooting that picture. A digital image selected among a rapid shooting sequence simply doesn’t have it. I agree that real artists can convey emotions with digital images too, but this is a different matter…
Similarly, listening to one song or more, randomly chosen among different albums, may be certainly nice and funny, I do it too sometimes, like I also use a digital camera. But if I want to comprehend, to really grasp the meaning of a work of art such as a long playing record, whether it be on vinyl, CD or in a smartphone memory, I must listen to it as a whole, concentrating my focus on music. If one has no interest in this it is useless to go to the next step: High Fidelity.
This is the reason for this webpages: to disseminate, spread the basics of High Fidelity to those who want to discover it and approach it for the first time.. Experts are on different websites. They would smile about these naive pages. I picture the typical reader of this website as someone that would be amazed to find out that there really is somebody to whom loudspeaker positioning is fundamental, somebody who listens to music preferably on vinyl records, somebody who wouldn’t be satisfied by mp3 playback, somebody who normally listens to a whole album without interruption. They are not crazy people, but only Music fans that love listening to it in a proper way.
Ok, the writer lifted the stylus from a playing record during a major earthquake event before running to safety.
I was 16…
Contact