Today, the primary source is the audio file, whether played directly from a fixed medium or streamed from the internet. This digital source has been dubbed liquid music, as opposed to solid physical media such as vinyl or CD. Let’s just say that the original recording often takes place in digital form (yes, even if it’s later transferred to vinyl), so let’s clarify a bit about what this is all about.

Digital recording simply means taking a sample of an analogue signal. Sampling according to the audio CD standard means collecting 44100 samples each second (44.1 KHz). Each sample is assigned a number value corresponding to the amplitude of the analogue wave at that fraction of a second. The CD audio standard uses 16 bit binary numbers to assign amplitude values: an electronic device can only understand “on” and “off”, something we humans represent with “1” and “0” in our binary numeral system (which is based on only two digits instead of 10 like the decimal system). “16 bit” means we have 216 = 65536 digits – different values that can be assigned. It seems a big figure at first glance, but it isn’t. Even if, on each second, we can assign the 44100 samples one of the 65536 values, we will always obtain something like what’s depicted in the diagram at left: a “saw-tooth” signal in place of the original analogue wave. 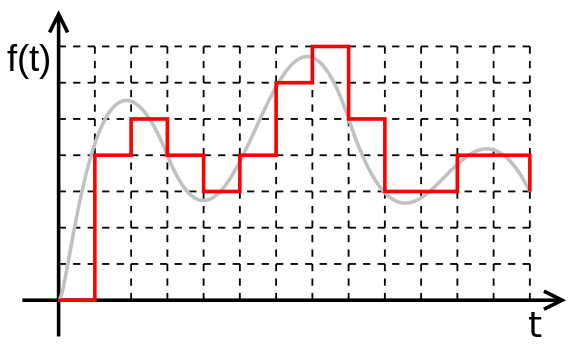 The CD player’s D/A conversion circuits do what they can to overcome this and other issues of digital audio. The most important is the “jitter”: a normal DAC’s task is to recover each of those 44100 sound samples, assign one of the 65536 amplitude values to each, and place each of them exactly where (in terms of time) they belonged, exactly on the instant the A/D sampler (the digital recorder) did collect them. In a few words, the DAC’s “clock” must be able to synchronize to the clock of the original signal. It never happens, the discrepancy is always there and can just be attenuated, not cancelled. This makes a DAC a quality one, the more it is able to reduce jitter (and other typical digital audio issues), the better the DAC performance. Today this is considered much more important that the loss of some interpolatable data. A more radical solution is improving the CD audio sound at the source by elevating the standard. More advanced digital audio technologies are the Super Audio CD (SACD), the DVD Audio or the HDCD, a kind of audio “Blue Ray”. This standards have increased both the sampling frequency and the bit depth of the digital recording process, but none of them have ever really took over.

The Pioneer N-50 is a streamer/network player with great value for money these days. The big brother N-70 offers even more.

It is hard to imagine, in the age of Internet and smartphiones, a market for high definition music that would push us to replace the old CDs with the new format, as it happened to the vinyl with the CD. By now the market is for streaming music files, maybe in high definition: sampling can be done at 20, 24, 32 bit with frequencies of 48, 96, 192 KHz. The size of the files grows but with it also the audio quality. Today downloading files of that size and storing them is no longer a problem. But even more so, the increasingly accessible broadband allows the streaming of formats even at high resolution. Services like Spotify and Deezer provide streaming of files in compressed format at a cost of 10e per month. They have huge databases of songs and albums of all kinds. Not everything is there but almost. Modern compression algorithms make the audio quality almost acceptable even in HiFi. If the system is of a certain level it might be worth considering a streaming service of uncompressed format. Apple And Amazon already offer uncompressed, CD-quality streaming a the same price. Deezer and Qobuz offer CD quality for about 15e monthly. All offer a one-month free trial. It’s best to test on your own system and choose according to your needs (in practice, if you don’t notice the difference between Spotify and Deezer, choose the cheapest one). For those who can appreciate the difference, Tidal, Deezer and Qobuz offer many titles in high-resolution formats at 20e per month, but even there it is good to do some testing because not always a high-resolution track corresponds, as we will see later, to a higher audio quality. Although it is possible in some cases to connect a smartphone to a DAC, it is good to consider a streamer or network player that can interface with the preferred streaming service. The purpose is also to make it play files stored on a hard drive connected to our home network. Often they also have digital inputs and can therefore be used directly as DACs if we want to connect other digital sources such as CD player or computer. So, gone are the new formats on optical disc, there remains the portable music player, basically the smartphone, or …the computer. 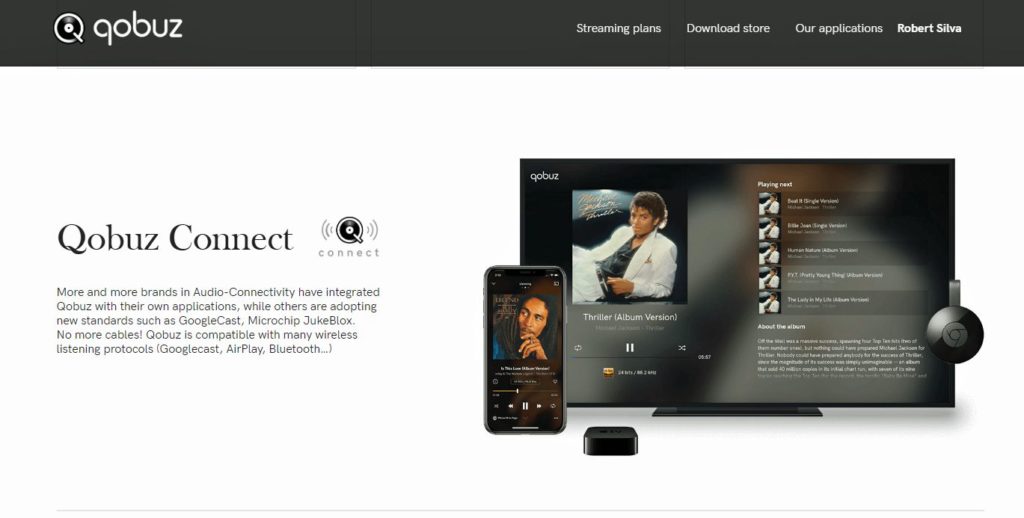 Qobuz, which ironically has a vinyl record as its logo, is one of the best subscription services for high-resolution streaming

We all have the best digital source at home…

Think about it: internal hard disks don’t suffer the same reading precision issues of optical media such as CDs and DVDs. On the contrary, they are way more silent and precise. Your computer’s CD\DVD-Rom player has a very good mechanics. But you’re not supposed to just plug in the computer’s audio output to the amplifier. The right thing to do is ripping digital audio data out of our CD’s to save them in a lossless format (no mp3s!) on the hard disk (better if a fairly-sized external unit) for playback. 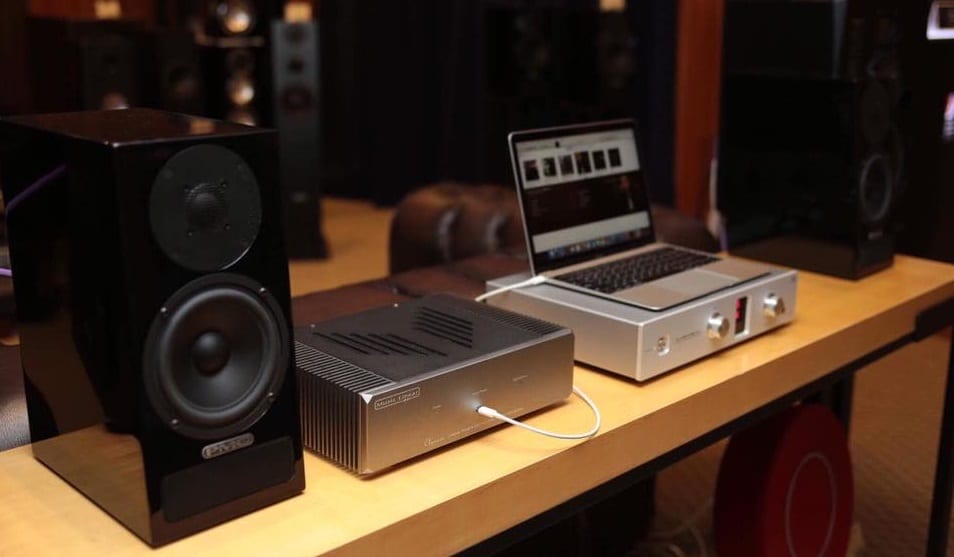 The availability of cheap and good sounding digital-to-analog converters to connect to the USB port, allows today to make the PC a HiFi source in the true sense of the word, perhaps the best and most immediate available. In the case of Macintosh, since 2007 they all have a Toslink optical output to which you can connect an external DAC (you can also do it with Firewire). By transferring the contents of CDs to the hard disk without compressing it, you can already get an improvement in sound quality, especially if the D/A conversion section of the CD player you have or could buy is not really excellent; simply, the hard disk does not vibrate like an optical disc while spinning and its magnetic reading system does not lose data like the laser in a CD player.

For further precision and reliability we could think of using modern solid state hard disk (flash memories just like USB pens or memory cards for digital cameras). They radically solve all the issues due to moving masses. It sounds nice to be able to manage all our music collection from our PC. If we also consider the opportunity of downloading high definition musical files up to 192 KHz and 32 bits, the CD standard lags way behind, at least in theory. From several points of view, a computer as digital audio source is probably the most reasonable choice. There is the problem of safely storing an ever growing amount of music files, same as for digital photos and videos. But today a modern Network Player connected through Ethernet to a NAS hard disk is maybe the best solution we have. It would allow us to properly listen to both our favorite streaming service and our stored high resolution music files, whether we ripped them off our old CDs or we bought them for downloading.

But not all recordings are the same…

Finally, if we really don’t feel like using a PC or if we just cannot do it, a good, few-years old used CD player, carefully selected among the brands named above, can surely give us a lot of HiFi music to enjoy. Even a modern DVD/Blue Ray multi-format player particularly focused on audio quality like those from Oppo

, can be a reasonable choice (we would also satisfy our cinematographic needs). But not all recordings, even from famous artists, no matter if on CD or vinyl, are made the same. Unfortunately, it is not uncommon to stumble upon recordings (even modern vinyl issues) produced according to a kind of fashion that has been spreading in the music industry in the recent years (unbelievably, with the agreement of some musicians!): an ever growing compression of the music signal.

A musical piece is made of different sections that can have vey different volume levels. Even during the same section of the track we could have a drum hit so intense to be at much higher volume than the section’s average. The difference in volume between the lowest and the highest volume peaks is called dynamics and it is measured in decibels (dB). A live recording may result in vert high dynamics, that is the volume differences between the moments played low and high are very large. When listening in your car or with mobile players and headphones, the high noise background may hide the low volume sections. The music industry’s solution has been to compress the music signal in order to decrease those volume differences (the so called “loudness effect”). It as become such a mania that some recordings have just 2 or 3 dB dynamic range, compared to the 90 dB a CD would be capable of! Today a recording with 15 dB dynamic range is to be considered a good one! In the 80s we could easily find double that. Therefore, the quality of the recordings is very important, being it digital or analogue. It is also obvious that the most important thing of all is the artistic content. Old masterpieces from the history of music are certainly to be listened to regardless of the sound quality, since they are part of. For the abovereasons, we should pay much attention to remastered recordings, often worse than the originals. Unfortunately, many modern recordings, due exceptions made, are affected by high dynamic compression.

The audiophile’s life is not easy…