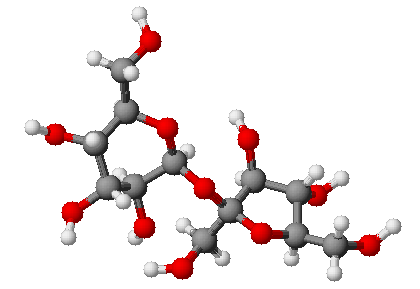 Elements unite to each other (react, as we say) to form the molecules of the various compounds. Not all atoms are compatible, some couples get along better than others. In simple approximate words, some elements find themselves with electrons in excess, others are lacking some. Nature always reaches for equilibrium, balance: the ideal situation would be having a number of electrons equal to the number of protons so that the atom would have neutral charge. Instead, atoms happen to be always lacking or exceeding one or more electrons, becoming negative or positive “ions”. Since all of them have the same goal of achieving neutral charge, the ones who have something more give it to others who don’t have it, forming molecular bonds. Hydrogen, for example, that has only one proton, always loses its only electron. Chlorine (Cl), which has 17 protons in its nucleus and 18 electrons around, often comes to help by offering hydrogen the excess electron. The two atoms bond to form the HCl molecule know as hydrochloric acid. But the couple don’t really get along very well. Chlorine would prefer hanging out with more affine elements such as metals and alkali.

The typical example is sodium (Na, form Latin natrium), that has 11 protons and always only 10 electrons around. In nature it is easily found bonded to oxygen, which has 8 protons and often 10 electrons around. The two excess electrons in oxygen bond two sodium atoms to form Na2O. If hydrochloric acid comes in contact with oxygen-bonded sodium, it easily reacts since chlorine and sodium tend to get along better as NaCl, the common salt; just as well, hydrogen and oxygen are better off as water (hydrogen literally means “water generator”). 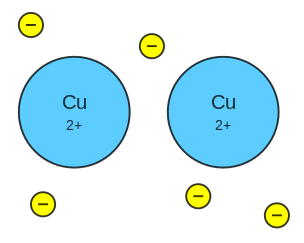 Some elements known as metals form particular bonds that allow electrons to move quite freely from an atom to one another in the molecules. In simple words, the electron cloud depicted above envelops the entire molecule, allowing the charges (the electrons) to move within it. But there must be a reason to do it. When electrons move from one atom to another there is an electric current. Materials that allow this are called “conductors”. What drives electrons, the electric charges, to move within a conductive material?