But how much does it cost?

Firs of all, we should dismiss the notion of expensive High Fidelity. This is not just for few rich people who can spend thousands on fantastic equipment. No, it is not necessary, absolutely. Today we can spend just a few hundreds and get a really enjoyable sound, provided we don’t spend them for a compact multifunction box. 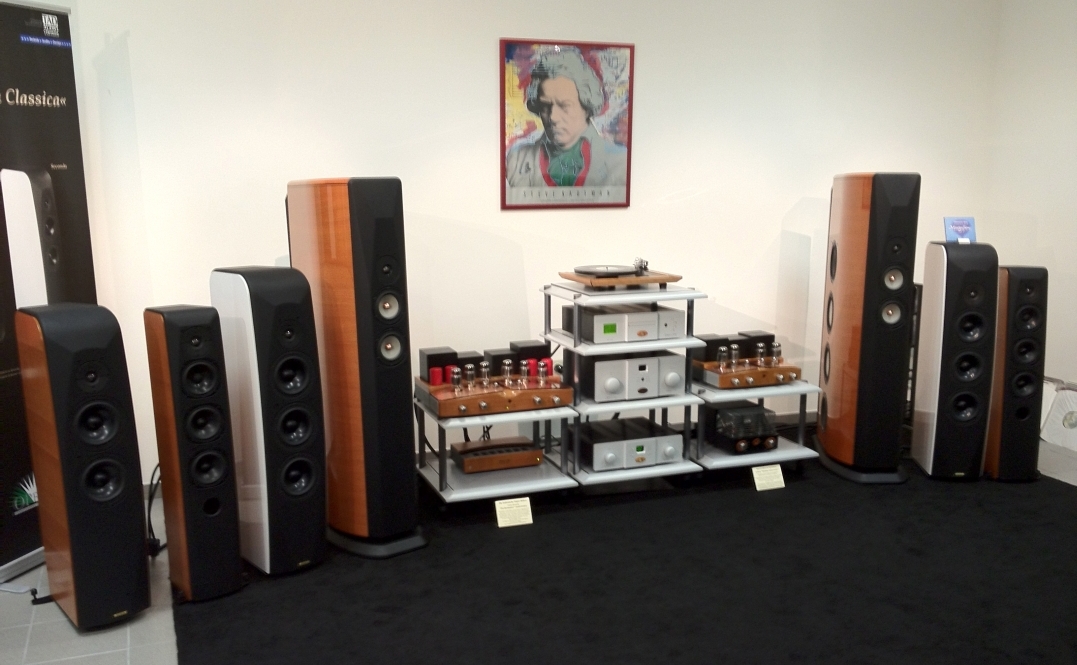 The basic HiFi set is a source (CD, turntable, computer+dac), an amplifier and two loudspeakers. Nothing more. For just over €100 for a recent used CD player, or even less for any DVD player with a digital output (both High Fidelity Music and movies), 100 euros for a digital-to-analog converter, 100 or even less for a small class D amplifier, about 200 for a pair of used speakers such as Indiana Line, we could assemble a minimal system with a real HiFi sound.
Even less? Scythe offers the Kro Kraft mini speakers bundled with the Kama Bay SDA-1100 integrated amp at a bit more than 100 euros! Add a DVD player and a DAC unit and you’re done: High Fidelity, the real one – and cheap (if you don’t believe it, please, read the links below). Also consider that connecting a D/A converter to the USB socket of any modern computer we could get rid of a CD player and use the internal hard disk, certainly superior as reading precision to any CD player (unless you extract the tracks in mp3 format instead of a lossless one!).

Where do I place it?

The listening room is of paramount importance in High Fidelity! Square rooms are to be avoided; cubic rooms are a nightmare: they enhance the response of low frequencies to the extent of being unbearable, nullifying any investment for electronic staff or loudspeaker placement efforts. Furniture and decorations are to be made with sound-absorbing materials such as wood, books, pillows, tapestries, curtains, frames (avoid glass), etc. An empty room is extremely reflecting (especially if it has wide windows with no curtains) and will make any system, even an expensive one, almost unlistenable. Often, working on furniture arrangement is more effective than upgrading a component. 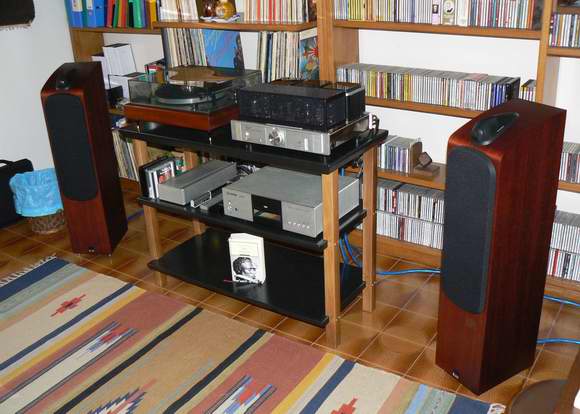 Maybe, if it is not possible to install the loudspeakers in the correct placement in a properly furnished room, it would be better to give up. The loudspeakers are the main responsible of the sonic characteristics of a HiFi system, but the listening room is even more important. It is also more important than the economical side: it is useless to spend a lot of money for a very good system when we place the loudspeakers casually, where they are less visible, recessed among the furniture, in the angles or high up in the bookshelf lying on their side! Often they are placed along different walls! What’s strange about it? Read on…

Today, the basic principles of stereo sound playback are ignored: two ears – two loudspeakers (in plain terms). Sure, the sound coming out from two outstanding loudspeakers will certainly be good to the less trained ear, placement notwithstanding (within certain limits – and it will always be a huge waste of money). But, besides degrading the performance they were designed for, we cancel the main reason they were built for: the so called stereo effect. Stereo does not simply mean two loudspeakers playing different sounds so that some instruments are heard on the left, some on the right. Our brain is capable of positioning an instrument because the sound follows two different paths to our ears. Take a trumpeter, for instance, playing right in front of us. The sound of his instrument will follow two identical, same length routes to our ears. While the musician moves to our right, the sound’s path to our left ear becomes longer, while the other will get shorter. The sound to our left ear will also have to pass through our skull. Therefore, the difference in the sounds our two ears perceive allows the brain to locate the source, both laterally and in depth. In stereo playback this principle is realized through two (2!!!) identical loudspeaker systems (not 5 or 7!) placed at the same distance from the listener’s ears. If the played sound is identical, i.e. at the same volume, the listener’s brain will perceive it as central, right in front. If the volume of the instrument’s sound on one of the speakers is raised, the listener will perceive it out of center. If the recording is well done and the system-room interaction is capable of reproducing it correctly, the listener’s brain is capable of locating all the musicians, laterally, in height and in depth! So it is clear that all this becomes impossible if the loudspeakers are not positioned correctly (or if they are more than 2).
The High Fidelity listening experience is based on the thrill of perceiving the musical event as we were really listening to it in a concert hall. The actual thing is impossible to realize, but we can get as close as to feel the same emotions as in, if not superior to, reality. Also consider that we are comfortably sit in our home, no traffic, lines, tickets, etc. Furthermore, the playback must not be realistic in the actual meaning of the word. It would be unbearable within a home. As in photography, the reproduction does not need to be identical to reality; reality is not black and white. Reproduction must be enjoyable to who is making use of it, wether it be a picture or a well played record from a high quality system. A particular effect in a picture, not necessarily identical to reality, conveys certain feelings as do warm, surrounding sounds from a good HiFi system. Maybe they wouldn’t be strictly identical to real life instruments, but they will be enjoyable enough not to cause listening fatigue, the typical issue of an ill assembled or badly installed system.
A serious HiFi system, only if properly set up in the listening room, can position all instruments of a symphonic orchestra in the space in front of the listener. More importantly, such a system won’t cause listening fatigue. On the contrary, it will encourage to continue listening as long as possible, forgetting about the electronic tools and immersing ourselves in the Music.
The Loudspeakers (only 2 – I said two!!!)
If we do not have at our disposal a listening room that will allow a correct loudspeakers placement, everything we said will be impossible to achieve even with a several thousands euro system. The loudspeakers and the listener must be at the vertices of an equilateral triangle (or at least isosceles, with the speakers at the base corners).  I insist, a modern Home Theater system won’t help it. The two channel stereo sound playback is all we need also with movies. With the same amount of money that would buy us a HT system, we could get a much superior sound quality buying just two loudspeakers and a stereo integrated amplifier, with less complications and configuration issues. So, first thing, let’s worry about how to better place our loudspeakers (better if floorstanders) with respect to our listening spot. Possibly, they won’t have any furniture in between, not even the system itself. 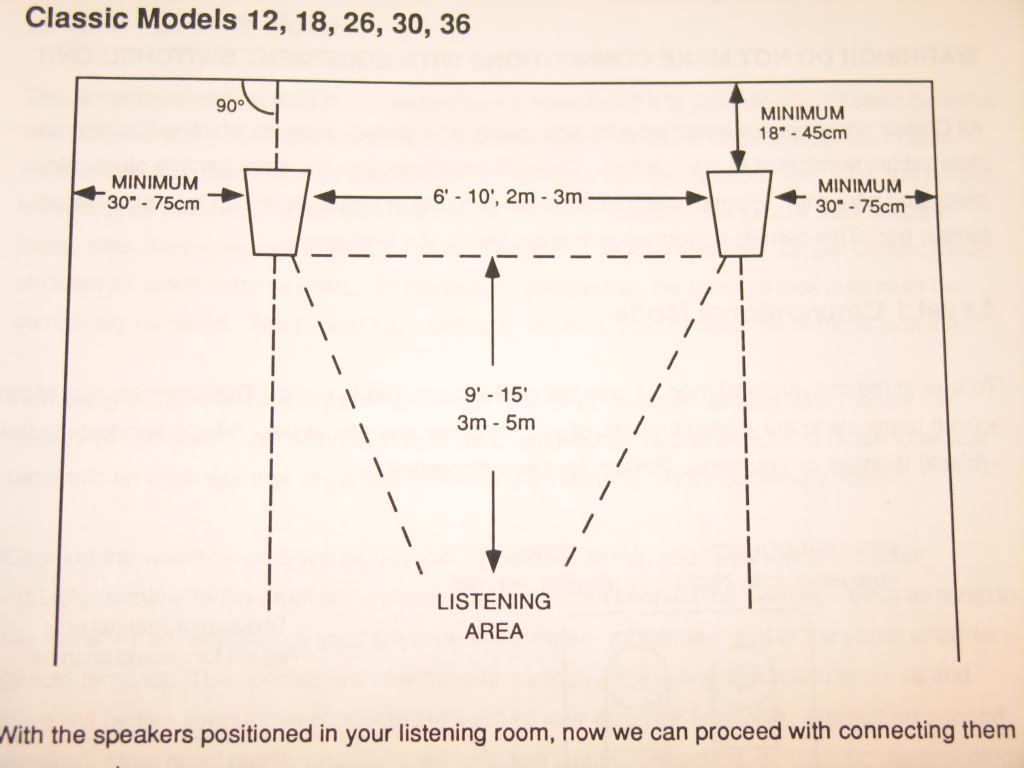 Nothing at all should be between the listener and the loudspeakers; the latter will be turned towards the listener’s ears (toe-in) and will be at a certain distance from the rear wall and at a different distance from the lateral walls. If you can’t do this, try being at least at the center, in front of the two loudspeaker systems. They will be installed according to the producer, on the floor or on proper stands, the tweeters (the ones reproducing high frequencies) at the same height of the listener’s ears. If you can’t afford this, abandon any High Fidelity pretense (or at least limit the expenses to a minimum) until you will find a room or a portion of it to dedicate to serious music listening. A good loudspeaker system, casually positioned according to home furnishing taste, is only a gross waste of money. I’ve heard about a guy who purchased a pair of loudspeakers he was uncontrollably driven to, two really large and expensive floorstanders, although he didn’t have room for them. So, one of the loudspeakers ended up lying on the floor on its side with TV set and HiFi system on it! You see how this is like buying a Ferrari without having a driving license, just to look at her everyday…
If you think you could set up your system with a minimum of decency, read on: we will reason about how to put it together or improve the existing one.
If you believe this is all nonsense of fixations, go get yourself a new plastic box full of little lights and put it where it is less visible!
HiFi buying guide on tnt-audio.com (1999)
Scythe SDA-1100 amplifier and Kro Craft speakers on TNT-Audio.