In the 70’s the Shure M97HE Era IV cartridge was second only to the V-15 Era IV because of the latter’s more refined beryllium cantilever. The V-15 Era V later introduced an even more advanced cut diamond called Micro Ridge (MR). But after 2006, Shure had to stop producing the V-15 because of the exasperating complication of producing beryllium cantilevers, an element toxic to humans, in safe conditions. The M97HE thus became the top of the range. In the V era, reviews began to complain about the excessive coldness of Shure cartridges, and Shure replaced laminated poles with cheaper solid pole pieces; this added a high frequency roll-off to the latest models, those with an “x” suffix (V15 VMxR, M97xE), claiming they would sound warmer. Not the M97HE Era IV, which like the V-15 Era IV remained with a flat response.

At this time I run the M97 Era IV body with a Nagaoka N97Ed stylus, making it a Shure M97ED Era IV (elliptical stylus tip)

For years I was satisfied with the sound of my Grado Prestige Gold (with an 8MZ stylus installed by mistake at Grado Labs) on both the Thorens turntables I owned. Some reviews had intrigued me about the Shure, particularly the V15. I found the III LM version, the one mounted on Dual turntables. There are many replacement options for the V15 III stylus, from cheap EVGs to top Jico/SAS from Japan. I read a good review about Ed Saunders spare parts and bought one – but it was defective. So I lost interest and sold the cartridge to buy a Grado 8MZ stylus and with Shure it looked like that was it…

During 2017, someone asked me if I wanted to take a look at an old turntable before they threw it away. Well, I don’t even remember the brand of the cheap turntable. It didn’t work, I couldn’t do anything about it. I trashed it myself, but I kept the cartridge. The brand required it to be saved: Shure.

The model was clearly written on the side of the cartridge: Me97HE “Encore”. I first decided to try to sell it. Any reasonable price would have been good, since I got it for free. But nobody came forward. I had been very clumsy with my cartridges in the past: two Grado bodies and Gold1 / 8MZ styli – I managed to damage both styli. I didn’t have working cartridges for my Thorens TD-160, so I started researching the mysterious Shure again.

The venerable M97 cartridge of the IV Era Shure (1978 – 1982) was highly appreciated by fans of the brand. It replaced the previous M95 and was a small step below the legendary V15 IV of its era. The Encore series was a reissue of the 1980s (during the Shure V era) of the best models of the IV era. Being produced in Mexico, some considered them of low quality, or at least of variable quality due to the seemingly random QC of Shure Mexico. In fact they were very good carts, according to Shure marketing electrically identical to their ancestors but with lighter and cheaper plastic bodies (or were they?).

They also kept the side protection of the cantilever that limited its movements and therefore the damage, as well as the famous stabilizer with the brush that provided both to improve the reading on deformed disks and to discharge the static electricity from the disk. The presence of the stabilizer also brought the tonearm-cartridge resonance frequency into the optimal range.

Since the summer of 2018, Shure has abandoned cartridge production altogether and the prices of cartridges and styli have begun to fluctuate. I found some Me97HE ads for more than 100 euros! I also started to discover good opinions about the Me97, which reportedly would sound very, very similar to the V15! If the inside of the cartridge body was the same as the original M97, with similar performance to the V15 IV and the V15 V, I really needed a stylus to try!

The suffix HE stands for “Hyper-Elliptical”, the shape of the naked diamond tip. The Japanese Jico are well known for their excellent aftermarket SAS styli for Shure cartridges, but they are expensive. Ed Saunders was also known for his high-value Shure replacements, but he is now off the market. Then I came across an ad on a used Nagaoka N97ED replacement stylus. It was an elliptical cut, not hyperelliptical. But it cost only 28 euros. I couldn’t spend much on a cartridge that I didn’t know if it really worked. Anyway the Nagaoka stylus had both cantilever side protection and a damping brush (it is said to provide all the functions, while the Jico ones just stabilize). So I opted for this spare stylus and…wow! I was taken by surprise. The deep, full and direct, no frills sound that came out from a 28 euro stylus in a cartridge I had got for free was simply amazing. Actually today these Nagaoka stylus are rare to find and someone dares to sell them for almost 100e! Maybe after reading these pages? Or neither I nor the careless seller I bought it from realized the value. Now I ask myself: what if I had a real HE stylus? Later, I discovered why this Nagaoka replacement has such a wonderful sound: as with the Shure originals, it has a telescopic cantilever, and the diamond is a nude mount, not bonded on as with, say, the N97xE or other less sophisticated styli. In addition, the cantilever is also thinner than average, favoring better detail restitution. 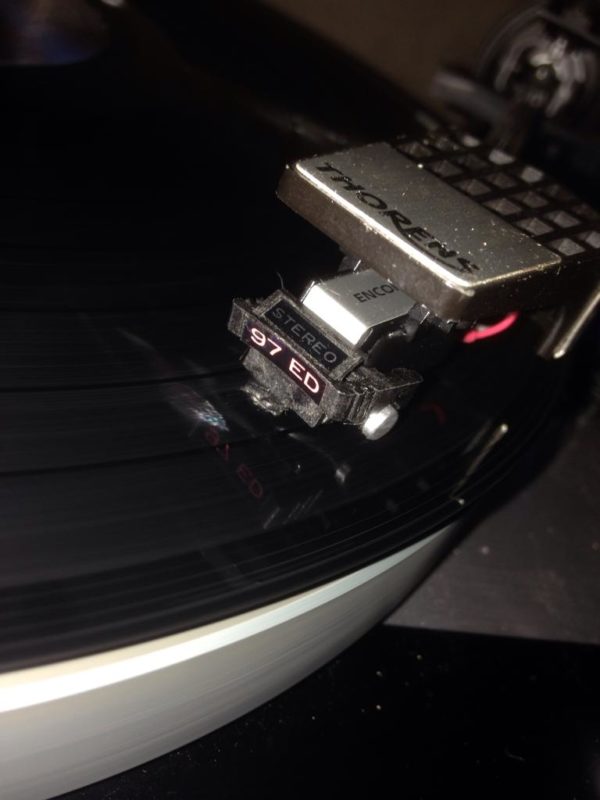 The Shure Me97 Encore mounting a Nagaoka N97ED stylus – note: the fin with the “stereo” label would fit in a regular Era IV M97HE body. It usually prevents the N97 stylus to be completely inserted, but in this case it seems it went all the way in.

I came across a quote from a famous sound engineer who has mastered several audiophile LPs, who claimed he couldn’t distinguish between master tapes and disc-laquers when he played them with a Shure V15 IV on a simple Technics SL-1200! This was the Shure of the good old days. A flat response is something I appreciate.

Actually, I later discovered that the electrical measurements of the Me97 are fully compatible with those of the more recent M97x, not the M97 Era IV. So it would be the cartridge from which the Shure derived its latest addition, the one with the high frequency roll-off, which I used with a stylus that was not perfectly compatible: the M97 series styli had a plastic fin on top with the Shure writing on it, tilted so that they fit perfectly with the body of the M97 Era IV. The body of the Me97 is different and the fin would prevent the complete insertion of the stylus into the head body. In fact the original stylus of the Me97 does not have it. To me it does not seem that the stylus is not completely inserted; but I read that it should be for less than 1 mm, and I have no idea what it may sound like if not inserted completely. The fact is that I’ve been using the Me97 with a stylus not built for it, neither for shape, nor for performance, and still I already like it. Bottom line: as soon as I was able I bought an original M97HE Era IV body. It came to me with an N97xE stylus (ironically) while I am waiting for a couple of HE Era IV NOS styli.

In the meantime the venerable M97 Era IV works like a M97ED with a Nagaoka stylus that fits it well (and that has astounded me even in this cartridge body), while the Me97 has been sold to a Chinese buyer with a slightly more compatible stylus, the N97xE that makes it to all intents and purposes an M97xE if it is true that internally they are similar. The performance of the M97 Era IV is superior with the Nagaoka stylus compared to the Shure xE stylus. I must say the Nagaoka is a nude elliptical while the Shure is bonded. It is also probably true that the external conformation that does not lead to a perfect coupling could affect the performance even if the insertion appears complete: The Nagaoka stylus adapted to the Encore body did not have great performance as tracking capability and sibilance on the test records. On the Era IV body, however, it performs excellently, tracking everything very well and minimizing sibilance. On the other hand, the M97 Era IV – Nagaoka pair is definitely more extended at the top, while maybe with the xE stylus the Era IV loses that extension. Is the stylus also responsible for the treble roll-off in the M97xE? Not likely. I’ve never compared this pair with the Encore – N97xE, but I think it has to be another top performance….

In 2022 I had the occasion to buy a NOS N97HE stylus in optimal condition at a very convenient price. Now my Shure cartridge has reached its top performance… 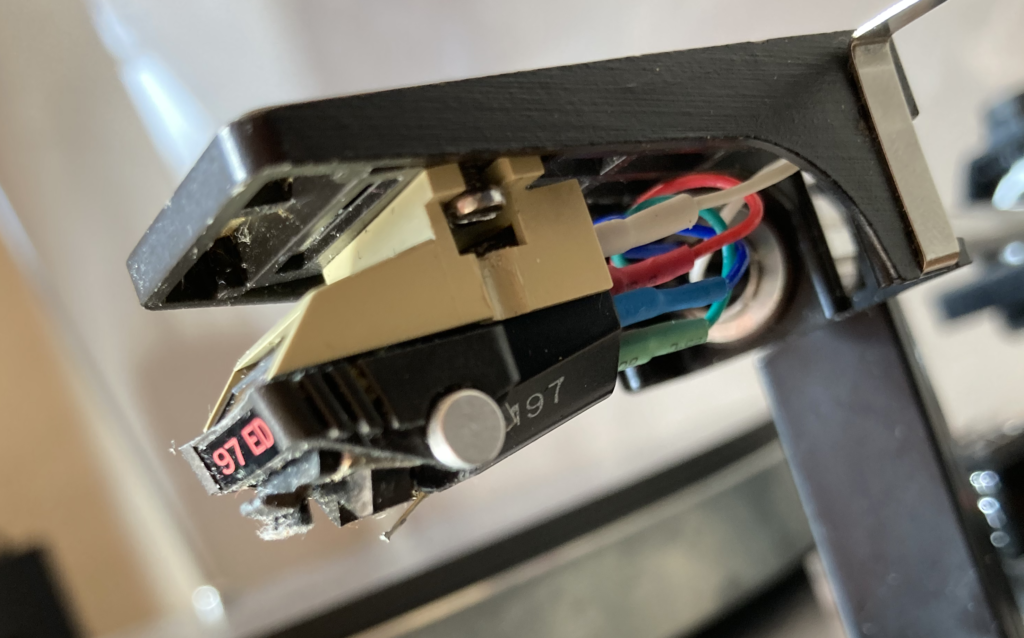 The Shure M97 Era IV, majestic in the TP16 arm of my Thorens TD-160. The nude diamond tip embedded in the telescopic cantilever generates fabulous sound despite not being hyperelliptical!

For a while I doubted that it would be worth spending money on a brand that no longer exists. However, Shure had never supported the old cartridges, and would not support the old M97HE, even if it was still in business. When I think back to the flattering review Geoff Husband did on TNT-Audio about the Shure V15 VxMR (one with treble roll-off, by the way), which made me go after the aforementioned V15 III, I’m really glad I now have an original M97HE Era IV. Geoff said enthusiastically that if you had a system that could reproduce the true bass range, the V15 would make stunning bass. Well, the M97HE should be very similar, and I have transmission line speakers…. 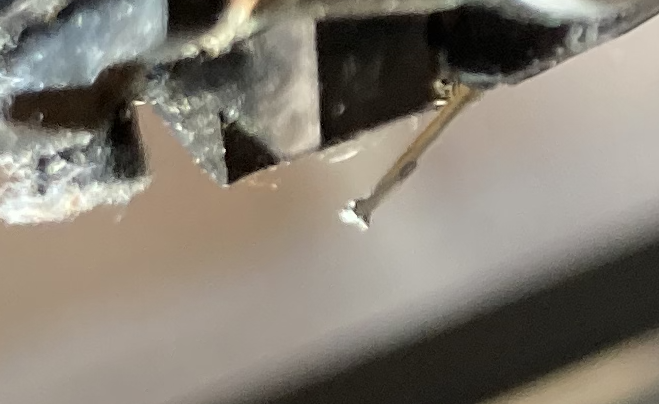 I would have never expected a 28-euro used stylus to be so refined: the Nagaoka N97ED replicates Shure’s telescopic cantilever (and even with a lower section) and the diamond tip is nude, not bonded! What a snatch!