Wonderfully good looking! A pleasure to look at it. The Woman Acceptance Factor here is really high. It is also an important piece of Italian HiFi history. It is a rather unique project, an integrated MosFet amplifier from an Italian company famous today for their wonderful tube amps. The 1991 Unison Research Mood is an Italian masterpiece but it is also technically superb. 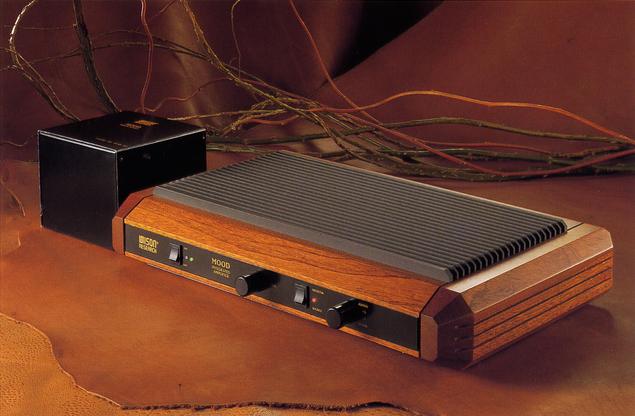 When, after my graduation, I decided to invest some money in a new stereo set, I was irremovable about choosing a pair of TDL loudspeakers. I was right to choose loudspeaker first, since they are the component that mostly affect the final sound of a system. I was and I am still convinced a loudspeaker system should be able to correctly reproduce the low range. Unfortunately, the Studio 0.5 are a difficult load for an amplifier and my still new and good-sounding Onkyo A-8200 was not up to the task. They explained me I would have needed an amplifier capable of supplying high currents (we’re talking Ampères not Watts), because the TDLs were low sensitivity speakers: 86 dB plus an impedance of 6 Ohm. Quite a load for a power amp (in general, loudspeakers average around 90 dB with 8 Ohm: the higher the figures, the better for the amp).

An old friend would have acquired my Onkyo so I had a budget of nearly 2 million Lire. The TDL Studio 0.5 were sold at a 1.2 Lire street price. Suggested amplifiers were small but very “capable” integrates. I still remember my thrill in having to pick among brands such as Arcam, Audiolab, Aura, Creek, Musical Fidelity, Mission (the little Cyrus) or the famous Scottish pre+power pair by Naim. They were all British brands like TDL. I found the TDLs available for testing at a dealer in Rome who suggested to listen to them while hooked at the Italian integrated amp by Unison Research. The audiophile-quality little jewel from a company based in northern Italy’s Veneto region had an enormous quality/price ratio. The Mood was strongly inspired to another Italian project of the same years, the Sonus Faber Quid (picture above – almost identical!). At the time it was the first (and only) solid state amp from Unison Research. It was built with a strong focus on both detail and aesthetics. It was incredibly beautiful! This was no British metal box… 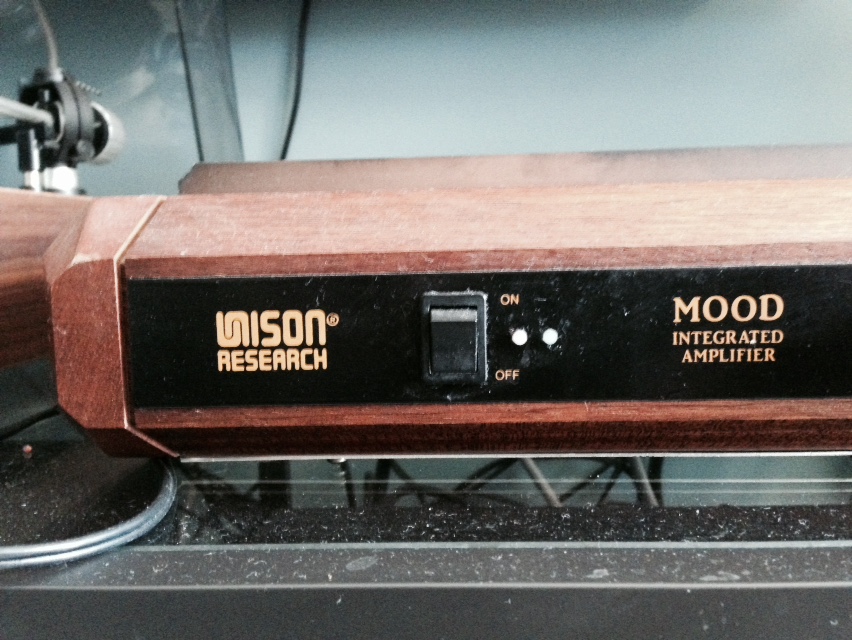 Unison Research has been founded in 1987 by Giovanni Maria Sacchetti, an Italian engineer who for 25 years designed projects for Unison Research while teaching electronics at the nearby university. Today, the Veneto-based company still collaborates with Padua’s university through Prof. Leopoldo Rossetto. In their continuing research they built a strong belief in integrated amplifiers as an ideal for HiFi purposes. Unison Research is well known for their valve amplifiers and their refined CD players, well built and good looking. At Unison they strongly believe a HiFi system should be a pleasure for both eyes and ears. As described in a review on an Italian magazine (Suono, September 1990), like the Quid’s “the Mood’s central body was made by a single high quality wooden block of  elegant design, all angles being finely smoothed – a high class built. The Mood is flat-shaped, the black satin-finished aluminum front panel only features a volume knob” – a top-class, thick-film Alps potentiometer; the Quid’s was by Nobel – “an input selector, the on/off and the record monitor switches”. No headphones output, no tone controls, no loudness switch. A very good sign. “The top panel is a large cooling metal grille directly connected to a pair of final transistors working in AB class (a mode that generates a lot of heat) for the first 20 Watts of the total 65 the amp is capable of supplying. The rear panel shows fine gold-plated connectors and very good screw-type bounding posts for speaker cables; everything is so top-quality that the amplifier is almost nicer to look at from the rear than from the front.” 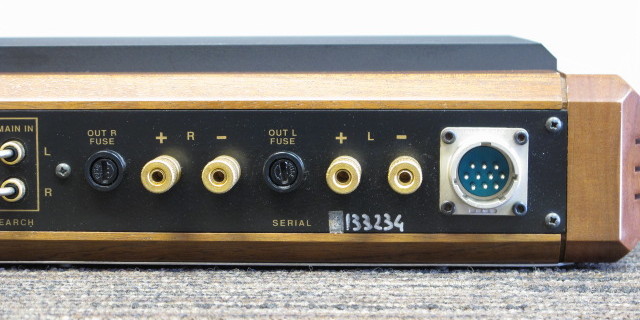 The Mood can be used both as pre and power amp. The “military-grade” (according to the salesman) built-in phono section can be switched from MM to MC from within the chassis. The magazine review also found the phono section very good anyway, though noisier than the line inputs that were completely silent at any volume. In summary, an impeccable built with an extreme attention to component quality. But that’s not all, folks! The power section features a large toroidal transformer that ensures high currents during peaks and is responsible for the fabulous dynamics of both the Quid and the Mood. It is positioned outside the main chassis in a “metal cube connected to the amplifier by means of a thick cable with a 10-pin plug safely screwed to the chassis”. This was identical in both Italian amplifiers. Two additional MDF boards installed in the inside contribute to the sturdy assemblage. The impression is one of a bomb-proof built. 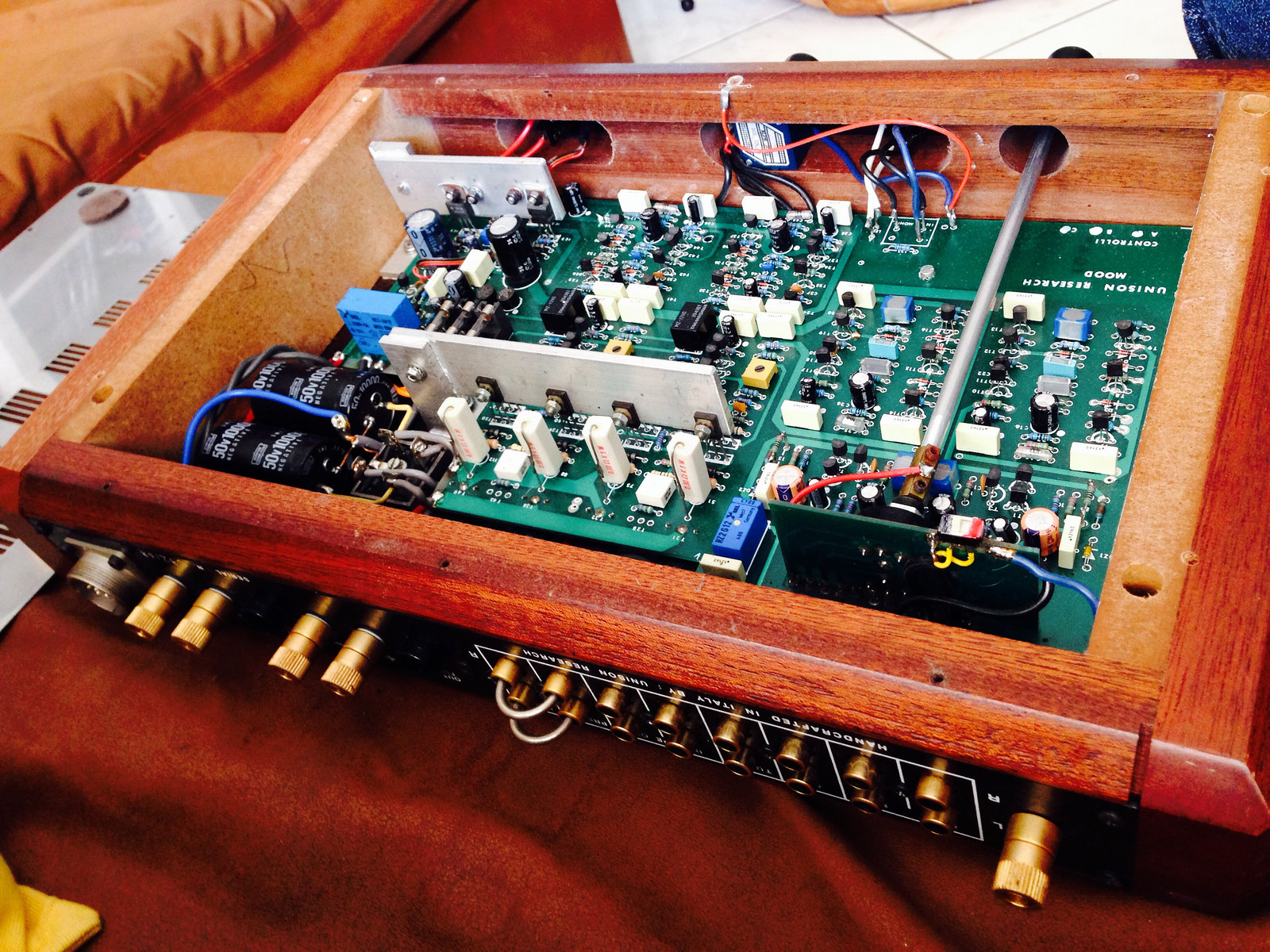 Again, from the flattering magazine review: “Inside we only find selected components; cable connections have been kept as short as possible. The Mood sports the highest precision and cleanness in design. The low range is sharp, accurate and structured; it is not an immanent and powerful bass. But it is correct, never blurred and performing at the top with classic music, jazz and rock. The midrange is transparent, highly enjoyable and refined at the same time. The Mood reproduces a perfect piano but also male and female voices are rendered with the correct timbre. The result is very interesting with chamber music, where the Mood easily reconstructs a good soundstage, as well as the baroque transverse’s and bowed strings’ correct timbre. This integrated amp has a mildly sharp medium-high, focused more on detail than euphonious and unrealistically sweet. From the dynamics point of view, we can forget we’re listening to an integrated amp; the micro-contrast performance is at the top, but the little Unison also shows great strength in the most complex dynamic peaks. Beyond musical quality, it is plain this is a completely reliable, carefully manufactured component that will last long thanks to its impeccable built”. 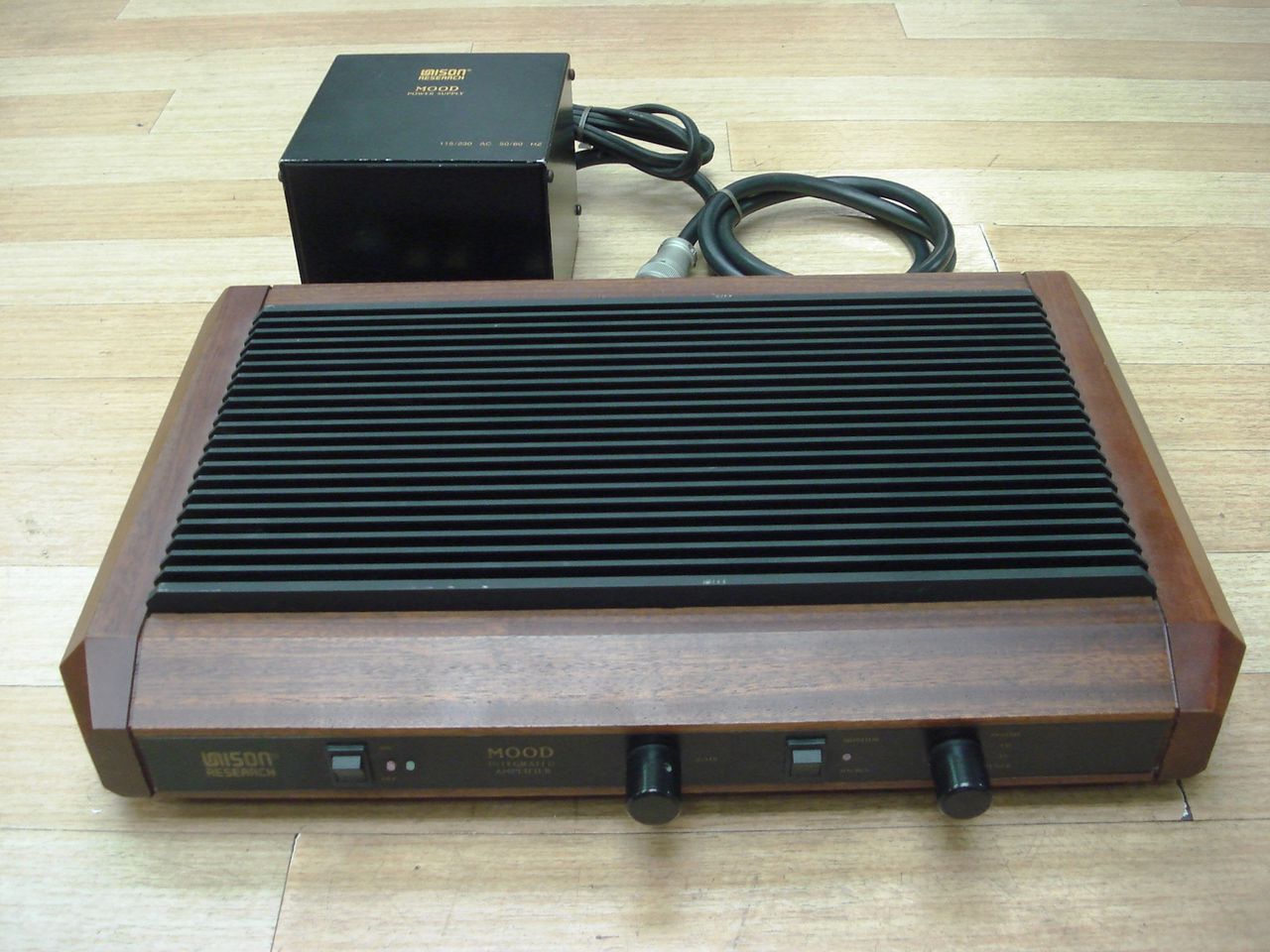 The Mood is a minimalistic amplifier, yet the care for any detail has been maniacal, just like the Sonus Faber project it is inspired from. It fears no load, being capable of a lot of current when needed. When I listened to it hooked to the TDLs, it easily defeated an Audiolab and an Arcam amps. The price was higher, more than I could have afforded, but my father was there with me to provide some additional dough, and since that night of December 13, 1991, the fine Italian Unison Research Mood integrated amplifier became the core of my system for 1.35 million Lire instead of the 1.6 Lire list price. A piece of art and fine Made in Italy technology with a 3 year warranty. Very good, since exactly after 2 years, incredibly right on December 13, 1993, the Mood only emitted a dull, low noise: the power section had burned out, I’ve never known why. It was replaced for free by Unison Research, shipping expenses aside (sadly, I discovered something bad happened – read at the end of the page). 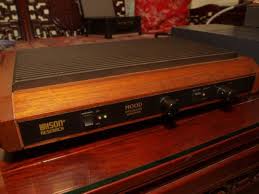 Since December 1991 to April 2019, the Studio 0.5 / Mood team cheered up my musical days but also my movie viewings: I’m a strong believer of two-channel Home Theater – stereo (especially when you have speakers such as the TDLs, that certainly don’t need any subwoofer). With a stereo system you can achieve a significantly superior quality than with multi-channel systems of the same price. It is also true that 3 or 5 more channels do not add much more to the enjoyment you can achieve with a very good stereo HiFi system.

Then I sold it and the Nait came….

Unfortunately, I had bad news from the guy who bought my Mood amp. He is apparently capable in working on circuit boards, so he opened the amp in order to perform a recap. As I wrote earlier (see above), I had the Mood repaired under warranty after the final stages blew up. The new owner soon noted 4 white resistors used as replacement in the power stage circuitry (well visible in the picture of the insides of the amp, above). It is clear they have been soldered to additional wiring. My untrained eye was not able to notice that… 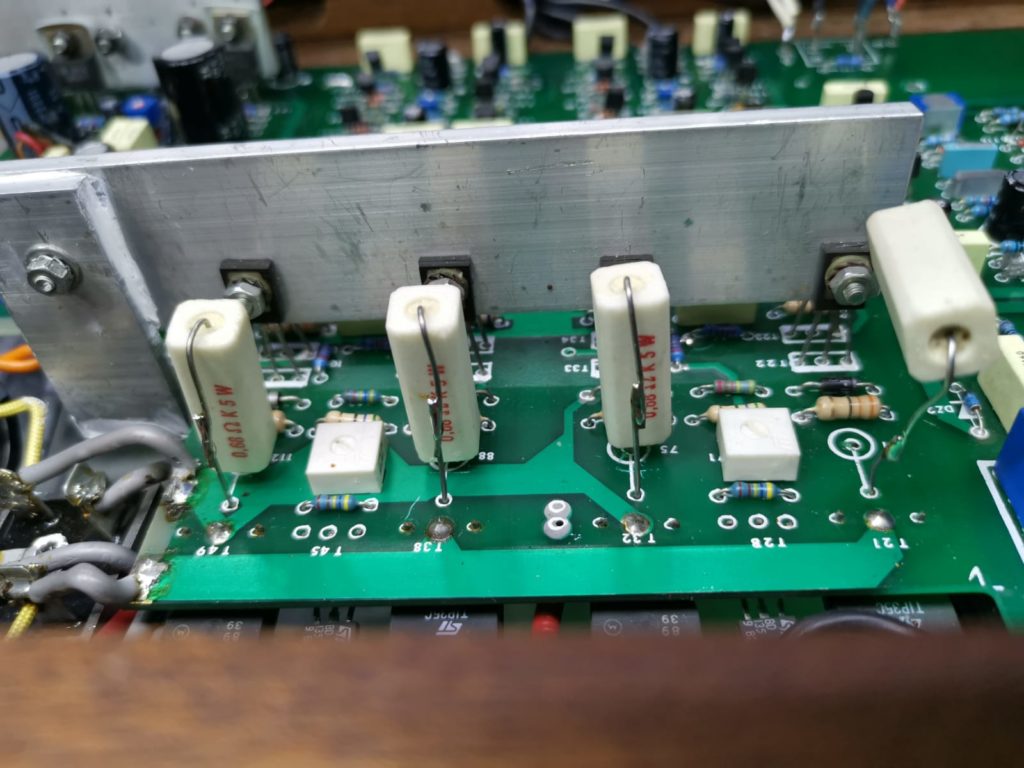 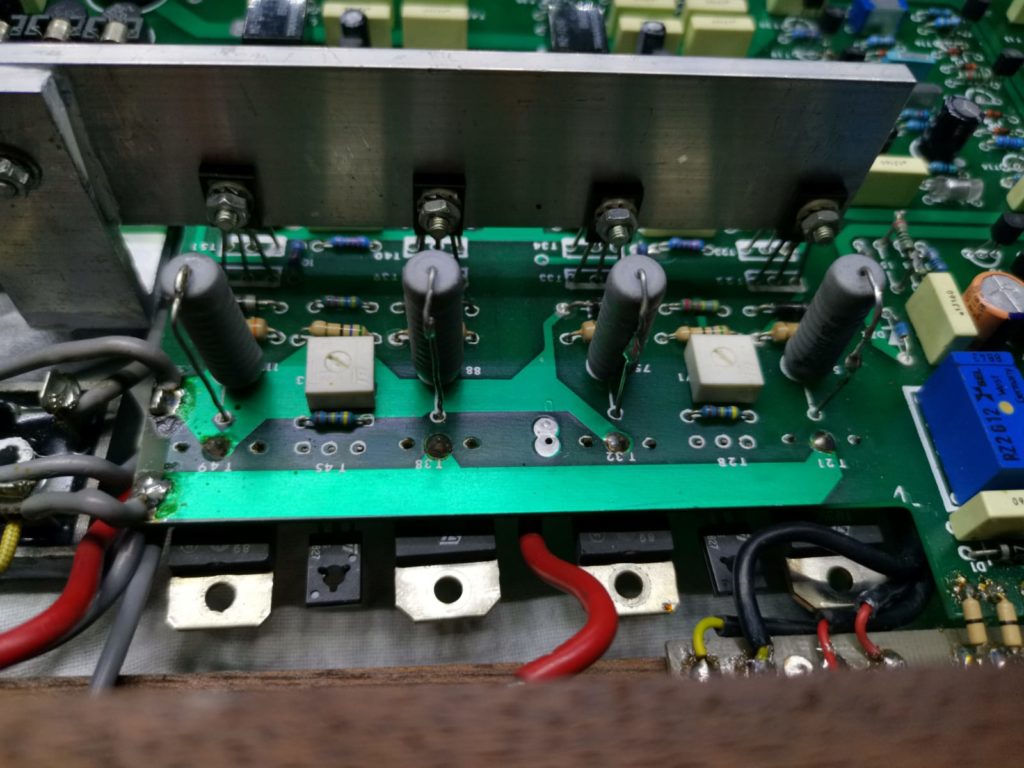 Below, the new quality resistors installed by the new owner – above, the old cheap ones installed by Unison during the warranty repair.

I was also unable to see the cheap quality of the resistors – and they are supposedly performing a rather important job for what concerns the inductance at the power stage. Same for ather resistors and caps that were gone with the power stage. In particular, 2 large capacitors from a quality Japanese company: they replaced one of them with a different quality Japanese brand; not nice for this level of costruction. 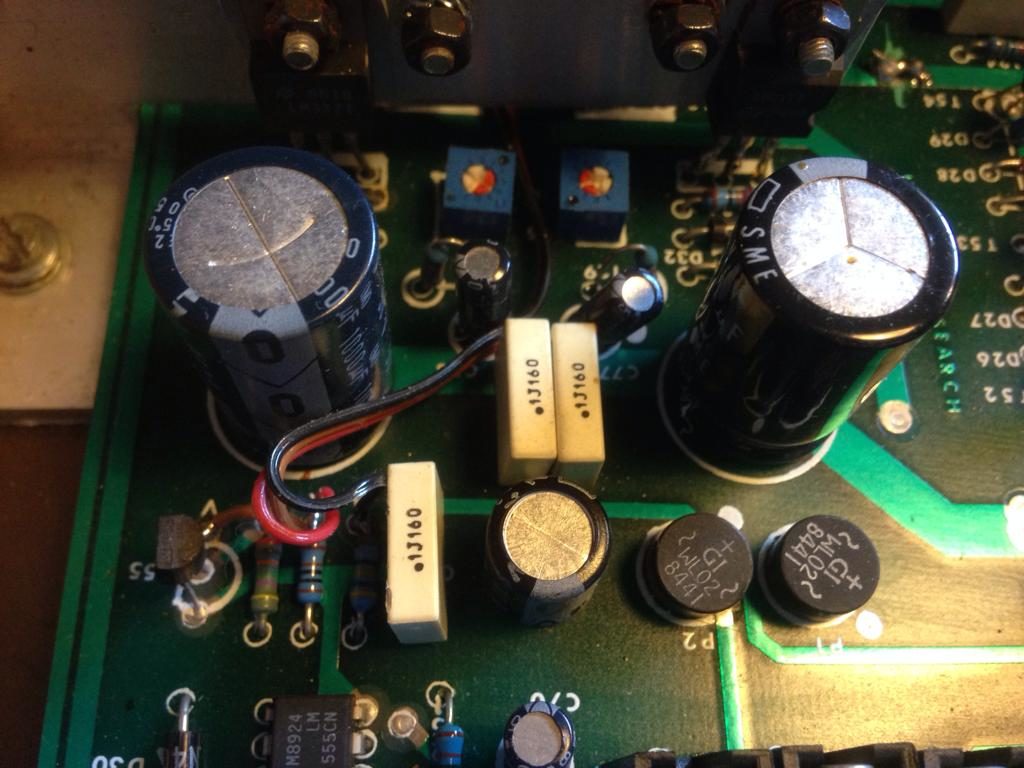 The two capacitor on the same circuit line: during the repair under warranty, Unison replaced just one; the replacement of both would have made for a job well done…

The new owner went on with a complete recap and resistors replacement with audiophile-quality components. He will be able to listen to the Mood at levels I was not allowed to for over 25 years, because Unison went on with a warranty repair under cheap. Apparently they used the components available in house at the moment.

It is rather upsetting…

The Sonus Faber Quid on tnt-audio.com