Liquid music and Network Players – the slow ending of the CD…

Certainly the future is the so called “liquid music”, files you can buy and download from the Internet in a format that is definitely superior to the CD. It will occupy much more space, though: we’re talking 48 to 195 KHz sampling frequencies up to 24 bit depth. Linn, Naim, HD Tracks, Deutsche Grammophon already offer such kind of downloads. You can also find mp3, for those who are on a cheap budget and have limited storage space (you will have lower quality than CD). Lossless formats such as PCM (WAV in Windows, AIFF in Macs) or FLAC (the open source format) are the high definition (HD) of music. Liquid music playback can be done from computers, external hard disks or flash memories, which have less problems than a CD. You should avoid the computer’s inner audio board: today’s availability of high-quality, cheap D/A converters to be connected to USB ports allows for a much higher fidelity sound. A simple inexpensive laptop and a USB DAC will suffice. Just pick recordings from the CD format on. Several free software programs allow ripping CD files easily with virtually no data loss. They can be played back from the computer without all those stability problems in reading from a rapidly spinning optical disc. The quality of reproduction will be higher than playing them back from the original CD. With higher PCM or FLAC standards, we could start thinking about a comparison with a well-tuned analogue system. 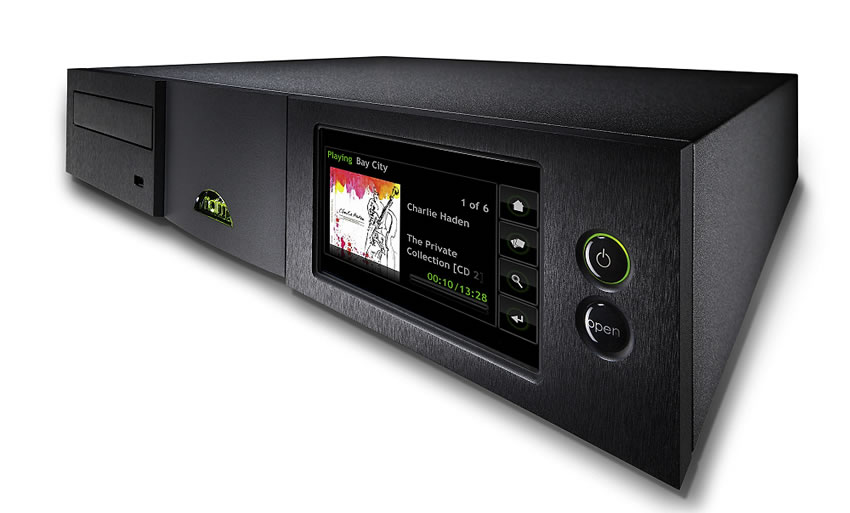 The CD is going to fade away. Higher spec optical disc standards such as SACD, HDCD and DVD-Audioare unborn. Ford Automobiles ceased equipping their cars with CD players, Pioneer car stereo don’t offer them any longer. Think about the Scottish HiFi firm Linn: they were so much into analogue audio with their mythical Sondek LP12 turntable (still sold today!) that they took a long time to produce their own, prestigious CD players. They were top-quality but this is over, since 2009 Linn does not sell CD players anymore, neither they offer assistance and maintenance;
they offer expensive digital Ethernet players such as the Klimax, the Akurate (at left) or the Majik, for high-end computer, hard disk or network playback. The England-based Cambridge Audio offers much less expensive similar products. The prestigious Naim Audio also from Englandmarkets expensive CD players/rippers with internal hard disks (the Naim CDX at top, right) and streaming capabilities at top audio quality. Less expensive systems are also appearing like the Cocktail Audio X10 (at right), for all your streaming, ripping, automatic cataloging and playback needs. It can play any audio formats from USB pen or external hard disk.

Network streaming is certainly the future: online services like Apple Music,  Spotify and Deezer allow users to access millions of tracks of any kind from any mobile device for nearly 10 euros per month. They use lossy formats, but the resulting sound is not so bad, although not comparable to a Flac played on a PC with dedicated software. They’re certainly better than certain mp3 streaming. With time, high resolution playback will be widely accessible; for now we have Tidal, a service using a Flac compression algorithm but it costs twice the other services. The trend is getting rid of the physical supports in order to enjoy music from immense Internet-based databases while we’re at home or out.

Not all all-in-one are that bad (less interfacing, more serenity)…

Another trend is the growing offer of all-in-one systems, which integrate amplifier+source. I used to flinch at the very thought. No more: I’m not talking about those plastic boxes full of lights sold among electrical appliance; I’m talking about serious HiFi products, made to play high-quality sound, just like the Cocktail Audio above. One of the goals is reducing interconnecting problems and cables. A single unit that includes amplifier, tuner and CD or even DVD player, all designed for top synergy, will also solve many problems of space, setup and placement among the room’s furniture. The Wife Acceptance Factor (WAF) will also benefit from this units. It is true that most HiFi geeks are males; our mothers and companions don’t easily accept a HiFi system in their home.

Companies like the English Arcam, world renown for their top-quality products, used to market an integrated system called Arcam Solo, worth many separates of the same price. Also Linn offered a similar unit, the Classik, both still available from the used market, in case you want to simplify things at home without compromising sound quality. Obviously, the drawback here is upgrading the system, which would mean the whole one. A separates system allows easier upgrades by changing, say, just the CD player and increasing the sound quality. If you don’t have furnishing and room problems, you better select the best component for each task, keeping in mind that a CD player and an integrated amplifier of the same brand are today designed to work in synergy for a better performance.

My beloved system, I wish you were invisible…

Totally integrated systems start to appear on the market. The Naim Mu-So is maybe one of the most sophisticated among them. It is a bluetooth and network player in a high-quality soundbar (no doubts on Naim quality). No bulky loudspeakers, maximum ease of use.

So long for the times when we were trying to match separate CD reader and digital converter! Today the mere purchase of an integrated CD player is questionable.

Many agree that the fewer the components, the better: less interfacing issues and modern technology integrated amplifiers and CD players will make you reconsider buying many separate modules, at least within a certain (remarkable) budget. The convenience of systems such as Arcam’s or Linn‘s could be the ultimate solution for those who want a real HiFi system with a minimal impact on furnishing and no sound compromises – they would also forget about all those amp/source pairing problems. Wanna seriously minimize? Linn systems can play with secluded in-wall loudspeakers like the Sekrit IW10!

No way! Sitting down to listen to some music is out…

I’ve got the impression that the trend of the future will be this: high-quality integrated systems with an Ethernet player like the Mu-So or one of the above Linns and a phono stage for our beloved turntable (I wouldn’t expect a phono input on such compact systems). I’ve also got the impression that the big names of High Fidelity are beginning to respond to this market trend that since many years is asking for compact, simple and versatile systems (sometimes to the detriment of sound quality). We know that most people now wants to listen to music in mobility, with an iPod/iPhone or similar, no matter if the music has lost some information.

High Fidelity manufacturers are trying to recover market sectors offering compact modules like the rCube from Arcam (at right), with a slot for your iPod so when you’r back home you can listen to your HiFi (?) music while doing other tasks; you can also bring it around like we used to do long ago with our portable record players or later with cassette, then CD players. The loudspeaker problem is also gone. Not exactly: forget about the stereo sound, the soundstage, the depth, the details – for all this you need a pair of well placed floorstanders in a purposely furnished room; you should learn to live with that). But today we listen to music on the move, we don’t seat in an armchair, we have no time. At home we constantly move, we listen distractedly while doing other tasks. We are losing the ability to recognize and appreciate a correct sound playback. So what’s the point in choosing the best source, amplifier, loudspeakers? It’s a waste of time. We better off with an Arcam cube, we plug our smartphone in and shuffle play it, so we won’t even pick up the tracks we want to listen to: we let the machine do that; surprise me! I’m being sarcastic on purpose but it can also be done intelligently: no mp3 format, iPod/iPhone can also play Apple lossless high definition files (AAC and ALAC). Fewer tracks will fit in, but the quality is top level; in the end we’d better use our computer as a source, provided we plug a good DAC to its USB port. High Fidelity guaranteed. An Tidal is out there if you just want to stream HiFi…

The better source? The computer, but what about …vinyl?

In summary, vinyl records are still the most enjoyable sound source we ever had. The CD, although comfortable, has been sold as the advanced and eternal system it is not, they just needed a commercial move to revive the stagnant discography economy. Today the CD sales are going down because of the easily available compressed music from Internet downloads – no High Fidelity here. Probably, the availability of HD music on the Internet (this is High Fidelity) and more and more spacious flash memories will radically change our idea of digital sound source. As of today, our computers are the best, inexpensive (we all have one at home), main digital source we’ve got. The richest of us will enjoy sophisticated HD players and/or streamers, but let’s remember that sound differences between expensive and cheap digital sources are not easily detected. Meanwhile we can take advantage of the price drop of some CD titles that  went from 20 to 10 or 5 euros (!) and play them in a good CD player (it should’t sound that bad compared to HD music, though) – we will enjoy a lot of Music in High Fidelity playback.