I am now coming out of a short teaching experience in an international school in Italy. For a year I taught science and geography in their middle school. Today is my last day and while the kids are relaxing in their own way I am reflecting on a few things that this short experience has brought to my mind. Starting with the last one: all the kids, indiscriminately, relax using their mobile phones. One of my generation is immediately reminded of how we would have done, 45 years ago in middle school, to relax in an hour left free for leisure. I used to draw. Nobody had computers at home. Very rarely there were the first, now ridiculous, electronic games. I never had a game console in my entire life.

Today we tend to think that young people isolate themselves from each other by locking on their mobile phones or tablets. But I can think of a bus stop or a train car from a long time ago with passengers all bent over in their newspapers or books. What has changed? It is natural to say the quality of the medium: would you compare a mobile phone to a book or a newspaper? There’s no contest. At least in our eyes, born in the 60s or 70s. But I also imagine these kids that will look at the new generations in 40 years’ time, staring into the blank while information is sent directly to their eyes without the need for screens. Today’s children will say that in their day they had an external screen, they were free, they didn’t wear the technology, they kept it in their pockets. Different times! Each generation looked at the next with a certain distrust, imagining the world in their hands. Yet the responsibility for raising the next generation is in the hands of the previous one. 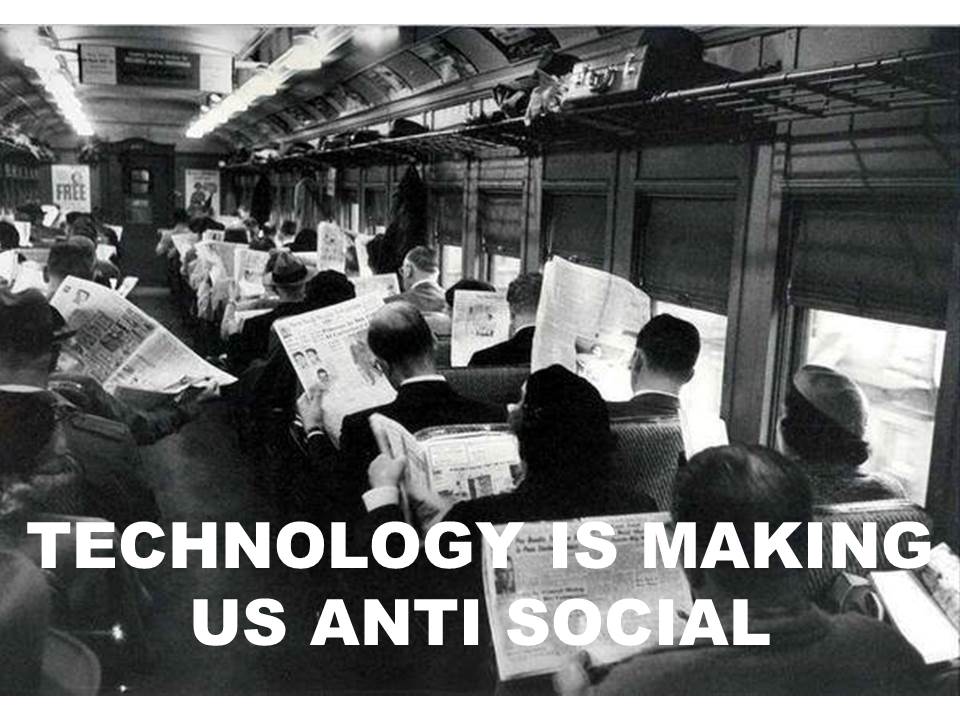 I consider myself lucky to have had a childhood of outdoor games, of collaboration and confrontation with peers, of inventiveness stimulated by the need to find a way to have fun. That’s how we trained our own creativity. Today it is the same, but they do it through electronic devices. My now former students are collaborating with each other using the same games on their respective devices. And my son mugged mine to play with them. I took a computer and started writing on another device… I’m not anti-technology, I use technology, maybe in a different way, for example to write and publish on this blog. When I’m accused to be always on the internet I smile thinking that I was among the first to use a modem to surf the World Wide Web (with the Netscape browser) and I found it extremely fascinating: it was the time when only some institutions and research centers had a website, the internet was not used yet for commercial reasons, even less for “social” interactions.

I kept this idea of the internet as a sort of modern encyclopedia where to find information of various interest. Even today I still use the internet in this way, to inform myself (of course you have to pay attention these times). Of course I have my own social pages, even my own site with a blog, but most of the time I spend online is not on social platforms.

We are pervaded by technology and yet schools, at least in my country, are struggling to align themselves. I’m not talking about using the interactive whiteboard to write on a monitor instead of the blackboard or to project presentations in class. What strikes me is that in such a technological world, science subjects in Italy are still so little considered: I am a geologist and I have been asked to teach science and geography. The students at this private international school take an exam every year at the Italian public school to be able to switch from the private to the public system at any time. Well, in my subjects they have not been examined. The science teacher who was supposed to examine them was not even present. Even if only for a year, I was very keen to make these kids understand the importance of scientific knowledge. The time we live in is paradoxical in some ways: scientific knowledge allows us a very high level of technology. In this school they teach technology, computer science, natural sciences, both in Italian and English. Yet the examiners of the Italian public school did not even think to check the preparation of these children in subjects that we ultimately touch every day. As usual here we go for Grammar, History, Literature… important subjects, of course, but not the only ones! Being a schoolteacher in Italy is not the most sought-after position. If you are a science teacher then, well, you’re such a loser…

Mathematical and scientific, as well as technological, training is important abroad. The graph above shows that we are one of the European countries that invests the least in scientific research. Everyone has noticed this, but the situation is not changing. Here I read about technological schools, experimental schools, IT-focused high schools… but at the end of the exams, be it these trivial validation of school years in private institutions, or the much-trumpeted high school graduation exams, here we are again swelling our chests with literature, history and philosophy, with Greek and Latin. But if you try to ask an intelligent question about science, everyone looks at you weird, starting with your literate colleagues. But they can afford having a very high level of discussion with the students, demanding a lot from them in the usual subjects. In my opinion this is a very harmful imbalance, as it would be if in a school one disdained grammar, literature and history to concentrate only on mathematics and technology. But no way, that’s how Italy is. And it is also a country most reluctant to change. In the meantime, the hatred for science and technology does cause damage, such as the anti vaccine movements that confuse the purely economic interests of the drug multinationals with the real effectiveness of vaccines that have (had) made us forget diseases such as polio, typhoid, smallpox. Are we so nostalgic for the past that we miss the occasional poor schoolmate with polio? Well, I’m not…

In my field I have to witness absurdities like blaming drilling for gas for triggering earthquakes, which are completely natural phenomena that have been happening since the Earth was born – and will continue to be, even if we extinguish ourselves and stop drilling wells. So we should be building properly, not picking on something else… 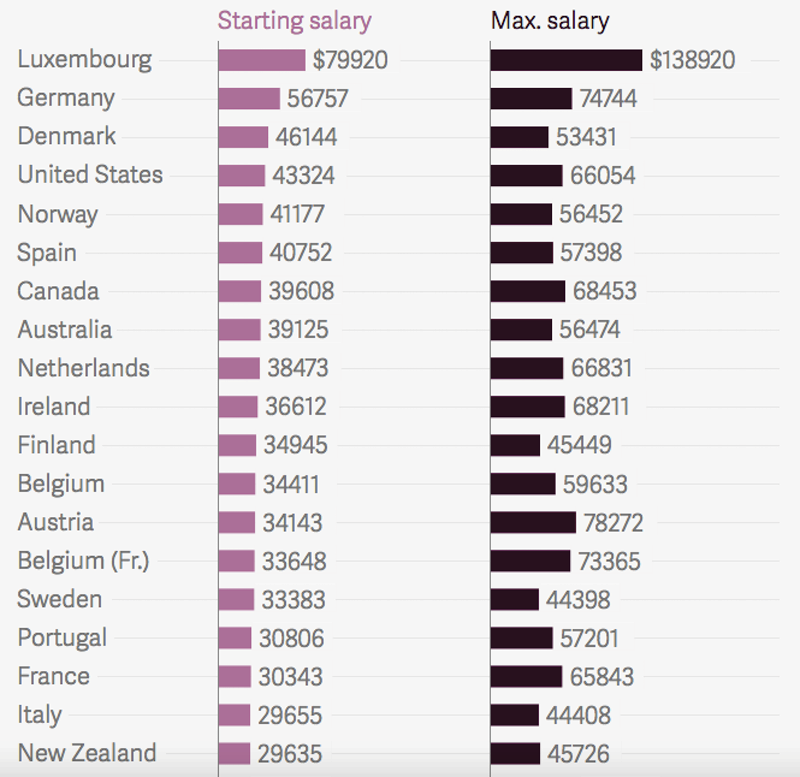 However, from the importance that the Italian school system gives to science, I should not be surprised that both the average citizen and the prominent journalist imagine the gas underground as a sort of tank, a cave filled with gas under pressure. The same goes for the aquifer. But it’s not like that and I’m not here to explain it to you. Find out for yourselves. Today it’s impossible not to find the right information, you just have to want it (but the latter is the key word).

I have always argued and will argue that teaching science well in Italian schools would save us a lot of these problems. But I don’t see any real interest in that. After all, how can a geologist get students interested if she/he has to teach them biology or a biologist that has to teach geology? Yes, in our system a science graduate can teach them all, indiscriminately. You’re telling me it’s like that everywhere, even abroad. But abroad, whoever has to become a teacher, a science teacher or something else, takes an appropriate course of university studies and maybe also because he or she really plans a career in teaching right from university. But here in Italy, after graduation (there is no specific degree to become a schoolteacher) you don’t find a job and you hope for a teaching position to get a safe salary. I’m not talking about the degree of respect that the Japanese have for teachers, to the point that they are the only category that doesn’t have to bow to the emperor. But a more organic planning, a specific degree course to train school teachers for the various subjects, would not be bad as a starting point.

After all, it has certainly been a good experience to me and I have learned a lot of things. But I’m sorry to have to confirm the backwardness of the Italian school, made of many prepared and passionate teachers, shamefully underpaid (look at the graph on the side), but also of many others who are there only because they couldn’t find anything else and had to fall back on teaching. I am not very different: I lost my job and used my scientific knowledge in the service of teaching. But I was in difficulty when I urged the boys to study, to give importance to all subjects because culture is freedom. Then I thought to myself: studying to become like me, an ultra-underpaid teacher in an extremely inferior position to your curriculum? If someone who has studied ended up like this (= earns so little), what example can he or she give? “Do like I did so that you will become poor”? What incentive do children have to study and learn more by interacting with teachers reduced to this state?

“Study and become scientists or teachers! You will have great satisfaction doing one of the most beautiful things in the world: sharing knowledge!” Who can, in conscience, really provide this kind of inspiration to kids in Italy today?