In 2005 I bought a wonderful Grado Prestige Gold moving iron cartridge, which I used for years on my turntable of the time, a Thorens TD165. I didn’t care much about alignment (maybe I used the TNT protractor at one point), I just screwed the cart on the headshell with no worries whatsoever about positioning the stylus tip, let alone VTA. I couldn’t wait to listen to the new cartridge that was replacing a Goldring Elan. I even scratched the gold-colored cartridge’s case with the knife I was using to tighten the screws, because I had just moved in with my girlfriend (now my wife) in our first house and I didn’t have any tools there yet. I could not imagine that that cartridge hid a secret gift…

I owned some Grado Prestige headphones which I liked a lot. That’s maybe why, when advised to upgrade the cartridge with one from several different brands, I chose Grado. The name inspired me. I decided I could afford no more than the top of the Prestige series and went for the Gold model. The company founder Joseph Grado, son of Italian immigrants, invented the moving iron (MI) technology, an alternative to moving magnet (MM) and moving coil (MC). Possibly it merged the best of the two worlds. I did appreciate the sound improvement for years, although the speakers placement was not optimal in the new house and in the ones that followed the next 5 years or so. Then something happened: trying to protect the stylus – possibly prior to the next relocation – I attempted to slid the stylus protector on the cart …the wrong way: I knocked the cantilever aside, it was slightly bent and maybe even retracted, pushed towards the inside of the cart’s body. Maybe I didn’t even realized it at once, but only after having played the turntable like that for months!

Well, our baby was due in a few months, the best period of our lives was about to begin, we had moved in the most beautiful house in the countryside after I grabbed the job I always had dreamed of. I had much else in my mind. So I was maybe excused… 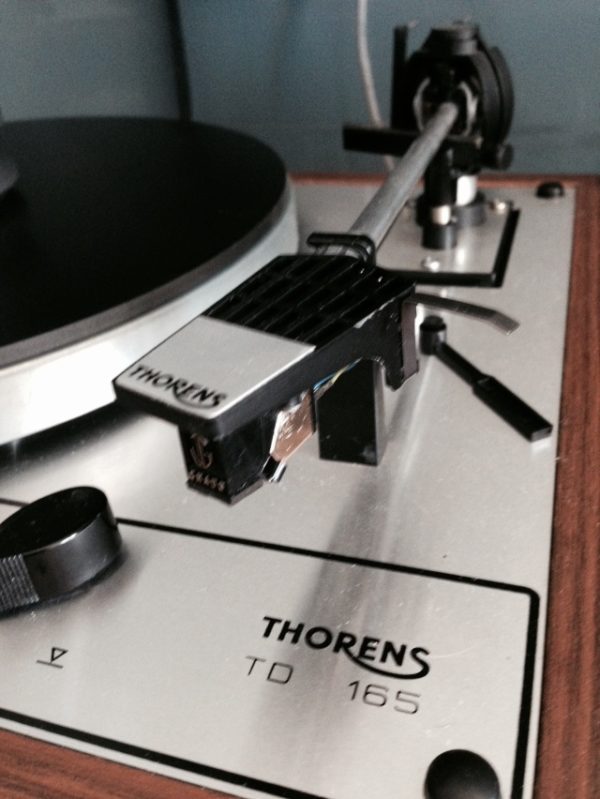 I went on the eBay and found a stylus replacement for the Grado Gold, that had become the Gold 1 by then. I figured I was even upgrading the Grado cartridge (I had no idea of what I had done!). I was so ignorant of the workings of a turntable, the necessary setup, the possible tweakings, that I had to pay a technician to have the stylus replaced! That technician set the VTF with a digital gauge, replaced the very old belt, sold me a blue felt mat and a graphite clamp – stating that such a deck needed nothing more than that, it was not worth additional efforts.

Actually, this was what drew me to the Internet and find info about this kind of turntables. Was it actually that bad? I discovered it wasn’t. First I upgraded the RCA cables. Then I stumbled upon theanalogdept.com and that changed my perspective completely! Fundamental in my learning process was joining the Audiokarma forum. Eventually, I almost became a serious Thorens upgrader.

The Audiokarma forum hosts many Thorens owners and fans, as well as Grado enthusiasts and experts. I learned that it was possible to upgrade my Grado Prestige Gold with certain styli that were originally designed for the preceding Signature Series, namely the 8MZ and the MCZ styli. The 8MZ is the cheaper option, the MCZ would also require a different loading. I read a lot about the Grado cartridges and I developed a love for the way they are still produced by hand in the original labs that had been the Grado family’s fruit store in Brooklyn. The Italian origins only added up to my fascination. I decided to invest on an 8MZ for slightly more than 100 euros, shipping included (old price converted from US dollars). Well, at the times I plugged the stylus into the Gold 0, I was perfectly capable to align the tip, set VTF and VTA. I had already put on this website about how to setup suspended turntables like mine; it also includes guides about how to install cartridges on this particular Thorens headshell. Therefore, I finally knew exactly what I was doing. And I was really amazed by the sound of the 8MZ in a Prestige body! Moving iron technology is great! 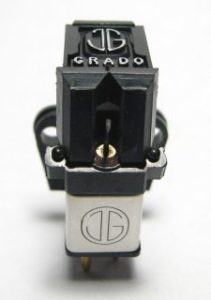 Now I wanted to try a Signature body. I found one through an AK forum member – a nice 8MX cartridge that would be the right companion for the 8MZ stylus. At Grado Labs they are not encouraging the pairing of Signature replacements and Prestige bodies; the Signature replacements are designed for Signature bodies, like my “new” 8MX. But many users confirm a great improvement even on Prestige bodies, to the point to be comparable to higher specs Grados.

I couldn’t wait to make comparisons myself. Sadly, when I removed the 8MZ stylus from the Gold body, I accidentally dropped it! It was bent to one side… The same forum member that sold me the 8MX body offered to check the stylus for me. He managed to straighten the cantilever but the output was still too low. When I got the stylus back into my 8MX cartridge, it sounded also poorer in the low end and some sibilants were distorted. Today an 8MZ replacement costs 50 dollars more. In the meantime I had lost my job and had no money to spend on hifi stuff. I didn’t even care, I had more pressing problems!

More recently I learned about the new Grado Prestige Series 2. I was curious. In the forums, the first ones to test them would find even the cheapest Black 2 very well sounding – especially when fitted with an 8MZ stylus! It appeared Grado really upgraded their Prestige series to another level! I heard that the sweet spot of the new series was the Grado Red, the best improvement relative to the price. I wished I could have invested in one of the new Prestige 2. I am left with the option of having my 8MZ stylus fixed by some retipper – but it would be an attempt. Otherwise I would have to chose between a new Grado Black/Red 2 or the likes, or spending nearly 160 euros (converted from today’s price in dollars) to buy a new 8MZ replacement for my 8MX. New Grado or old Grado? To move the iron or not move the iron? This is the question…

As I was mumbling over this dilemma, while holding the old Grado 0 with the stylus stub it originally came with, I happened to focus my sight on the stylus grip just by chance… I couldn’t believe my own eyes! My first Grado cartridge of 2005 was equipped with the much discussed stylus of the decade. I could clearly read “8mz-v” etched on the grip’s side. No way! I had owned an 8MZ from 2005 and I had no idea about it! It was the earlier version that used a nude tip; the one I bought 10 years later has a bonded one like today’s replacements. At Grado they say the only possible explanation is that the 8MZ had been installed in the Gold 0 by mistake. I had the ultimate bundle of the 2000s directly from a Grado dealer in Italy and I was completely oblivious to it! And I also treated it like shit! I tossed it at the Thorens and did not imagine what high level performances it could hit, had I been capable of creating the conditions for it to. Now I have two 8MZ stubs – I hope I can get someone to make 1 good stylus out of 2.

Can you see the irony in the moving iron cartridge…?