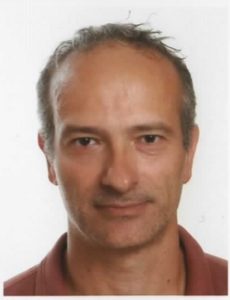 I was born in Rome in 1964 in a family from Molise. I always say that I am a Roman citizen of Samnite origins who married an Etruscan woman. So I had no shortage of anything. 😉

Since before I learned to read and write, I used to sing. I would memorize the lyrics to songs I heard on my parents’ radio and repeat them, crooning both the words and the music. I also involved my sister who was two years younger. At some point we discovered an uncle’s guitar and from there I started playing it and never stopped. We finally had an instrument with which to accompany our singing, something that was a more or less constant background to our youth.

My passion for guitar and singing, for music in general, also led me towards high fidelity. Everyone had a stereo system at home in the 70s, even a couple of my uncles. At their house I discovered the stereo effect and was really impressed. Their stereo turntable was passed on to me when they bought a coordinated system. Later, my parents bought me some components and I set up my first system. To this day, I can’t do without a high-fidelity stereo system.

As teenagers we lived in a small town and our father was in the forensic police. He and a couple of co-workers who lived near us took turns using cars to get to the office. One of them had a wonderful Alfa Romeo Giulia, the car of my dreams. When it was his turn I was thrilled! I had grown up with the myth of my father whizzing around in police Alfa and the Giulia was the number one car in those days. All of this sparked a passion for a brand that at least originally built cars from the heart, not for commercial reasons.

When I got out of school, I would stop at the police station and wait for my father to finish his shift. Sometimes I would be with him in the darkroom watching in fascination the process of developing a black and white roll (the subject was usually less interesting if not macabre). One day my father came home with a beautiful chrome Nikon FM and since then it has been the ultimate photographic camera for me.

While I was in elementary school, a colleague of my father presented me with The Little Chemist Lab; it started my fascination with science, from chemistry to astronomy. This was coupled with a passion for science fiction born with UFO in the 70s and Space 1999 to follow. You only heard about computers in science fiction movies, and when they started showing up in homes I was intrigued. I bought some computer publications at the newsstand and seriously considered enrolling in a university course. It turned out differently, but computer skills would always distinguish me and one day they would allow my professional rebirth.

Dreaming of relativity, black holes, and time travel, which the wonderful high school math and physics teacher told us about, I ended up enrolling in Physics, but I hadn’t dealt with the skimpy high school math program I had just left. I ran towards a discipline with less math requirements and found Geology. Thanks to another wonderful teacher I became passionate about it and it became my job for a happy period of time in which I started a family with a beautiful wife and a wonderful son. Unfortunately the geology career came to an abrupt halt and I had to recover with computer science.

Just as my career as a geologist was getting into full swing, I came across a martial art that took me by surprise: I had never bothered to learn how to defend myself nor was I fascinated by oriental disciplines. A friend was opening his Aikido class and invited me to try it. Reluctant, I went and it was love at first sight. For 20 years I practiced Aikido intensely, and for 10 of those I also taught it with passion. I lost my job as a geologist, which I had fought so hard for, and I rediscovered my love for the guitar. Probably the combination of the two events, then a relocation and the Covid have distanced me from Aikido…