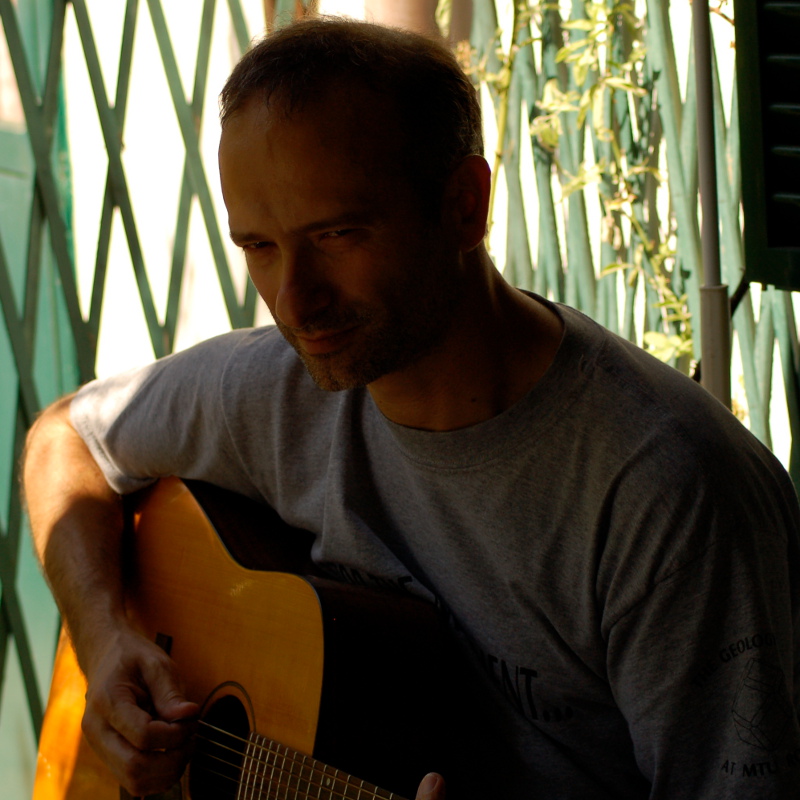 For several reasons I can say that 2016 was the worst year of my life. It started with the loss of my dream job, the one I had fought so hard for and after so long obtained with immense satisfaction ( the thing had matured months before but January 2016 was the last month of work). Toward the end of the horrible year my father’s young brother, 10 years younger, passed away. I thought he would be the uncle who would remind me of my father when he would be gone, but instead… With his guitar my sister and I had started experimenting at a young age. A few months earlier I had started playing with the cover band I still belong to, and on December 30 of that year the other guitarist died suddenly. It was a bitter conclusion to a year already quite full of bad events. But it was the year I started playing guitar again and bought my current Stratocaster, a guitar I dreamed of since childhood. So I feel like making a balance of that year.

In the face of far more serious events, the loss of my job is hardly a real tragedy. I had a hard time of it because at just over 50 years old, it is not easy to find a job in Italy, in part because the environment in which I was working was in a deep recession anyway. The thing that exhausted me the most was the idea of how much I had struggled to get where I was, how much I had struggled in the past not to lose sight of the goal, how much energy I had invested in reaching that goal only to see it slip away from me like that, like a rug pulled out from under my feet with a tug. But I don’t want to talk about my work. This post is about music.

It has been a nasty experience to be unemployed with a small child to support. Let’s say that when I met my wife she was an entrepreneur and I was a researcher. She ended up in a call center and I ended up in a factory. But as soon as I lost my job she herself, realizing perhaps that my sanity was at stake, urged me to accept the invitation of a friend who had frequently spoken to me about the possibility of joining one of his cover band to play music. I remember the impact the mere idea had on me. It was as if a fire hidden under the embers, never really extinguished, was being rekindled. Something was blowing on the embers, and the fire would soon flare up irresistibly. For the past 20 years or so, my true essence was fully expressed on the tatami when I practiced Aikido, a martial art I had discovered by chance and which had literally struck a chord with me. But the big blow from losing my job must have cracked something. Perhaps the fire of music was re-emerging from those fractures, a bit like magma slowly making its way to the surface. 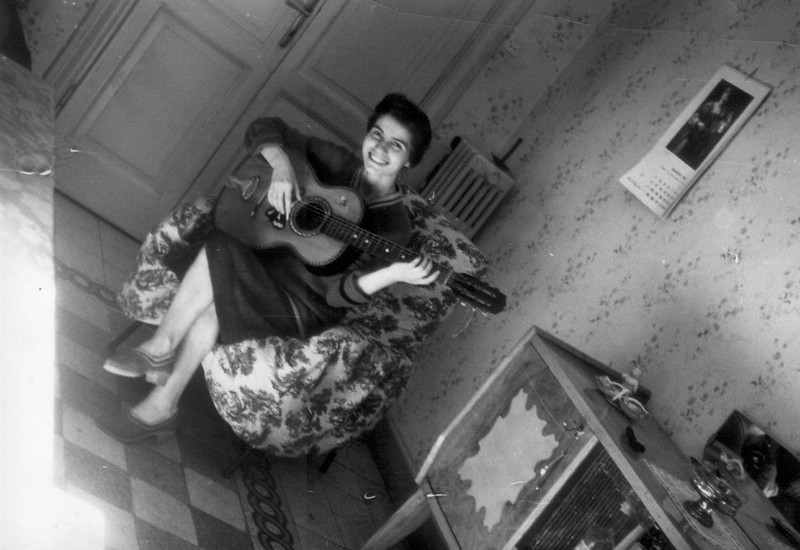 My uncle’s old guitar had ended up in my mother’s lap for some reason, before I was born (she has no idea how to play it 😉 )

From an early age I used to sing, even before I learned to read and write. My sister and I used to have fun learning lyrics by heart so that the two of us could sing them together. It was she who discovered our uncle’s guitar at our grandparents’ house one afternoon. She showed me how she had noticed that pressing the strings in different places on the fretboard produced different notes. Uncle saw us interested and drew us a small handbook with the first chords and gave us that old guitar as a present. I couldn’t stop experimenting. My father also knew a few basic chords and helped us with learning in the beginning. He was the one who had bought that guitar while he was in the military. It was back in the family, and my sister and I developed typical guitarist calluses on our left hand fingertips: old guitar with old metal strings – we were battered!

I remember well how, sitting on the floor next to the cassette recorder, I was trying to find by ear the right first chord one of the songs we normally sang began. It took a long time to find that first chord. Then for the second one it was still hard work, and so on…. Gradually I began to understand the logic of it, and after a while we had a musical backing to sing to! It was amazing to be able to play and sing at the same time! I was just over 11 years old.

It was a time when we used to hang out outside with friends and play, and a guitar to sing all together was generically welcome. A few other friends were also playing, and after a while we came up with the idea that it would be good to divide up the tasks. I took it upon myself to start figuring out how to play solos. The other friend did not dare to go beyond chords. We proposed to my sister instead to learn the bass parts. That was the end of the old guitar, on which we mounted bass strings causing the bridge to disconnect. My father realized it was time to provide us with more worthy instruments and bought us an electric guitar and a bass guitar with a shared amplifier. I dreamed of the Stratocaster and was beside myself because my new guitar was a perfect imitation of it! The best gift ever! In time, adding a drummer, we would start a small band where we played covers of songs we liked and recorded cassettes that I still keep, nothing more. 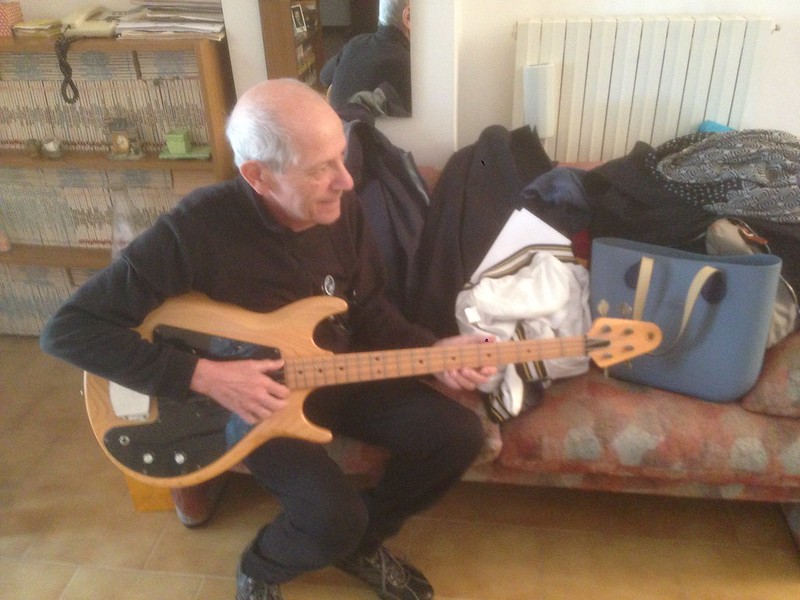 Years later I bought a Paul Reed Smith instead of my dream Stratocaster. I kept it for a very long time but rarely played it. By then I was just playing on my own, on acoustic guitar and vocals, to blow off steam when I had time. I would rarely unleash the electric to play behind records or sometimes on computer-built backing tracks. Even more seldom did I get to play with someone else, but by then music performed live was a thing of the past. We gave our old instruments to our cousins, the children of the uncle for whom it all started.

My first electric guitar disappeared, no one knows what happened to it. The bass guitar, on the other hand, had remained in the cousins’ bedroom, by then they too family men who had completely abandoned all musical ambitions. It often happens that playing remains a memory of youth. I never really stopped, the fire did not go out, it was just a little smothered. As it should be, I used a bad event in my life to rediscover it and have it help me deal with the negative impact. January had been the last month of work and February the first with my new oldtimers’ band.

As summer arrived, we were able to give our first performance in front of friends and family. Toward the end of the year, visiting our now long-sick uncle, we discovered that the bass guitar that had been my sister’s was still there in a corner and we had never noticed it before. It was exciting for her to be reunited with that instrument. But unfortunately that was the last time I saw my uncle. On the evening of December 24, one of my cousins alerted me to the bad news. My sister and I spent Christmas Day with our father at the funeral of his young brother, the one who was to survive him for a while. What a sad time – and it wasn’t over. 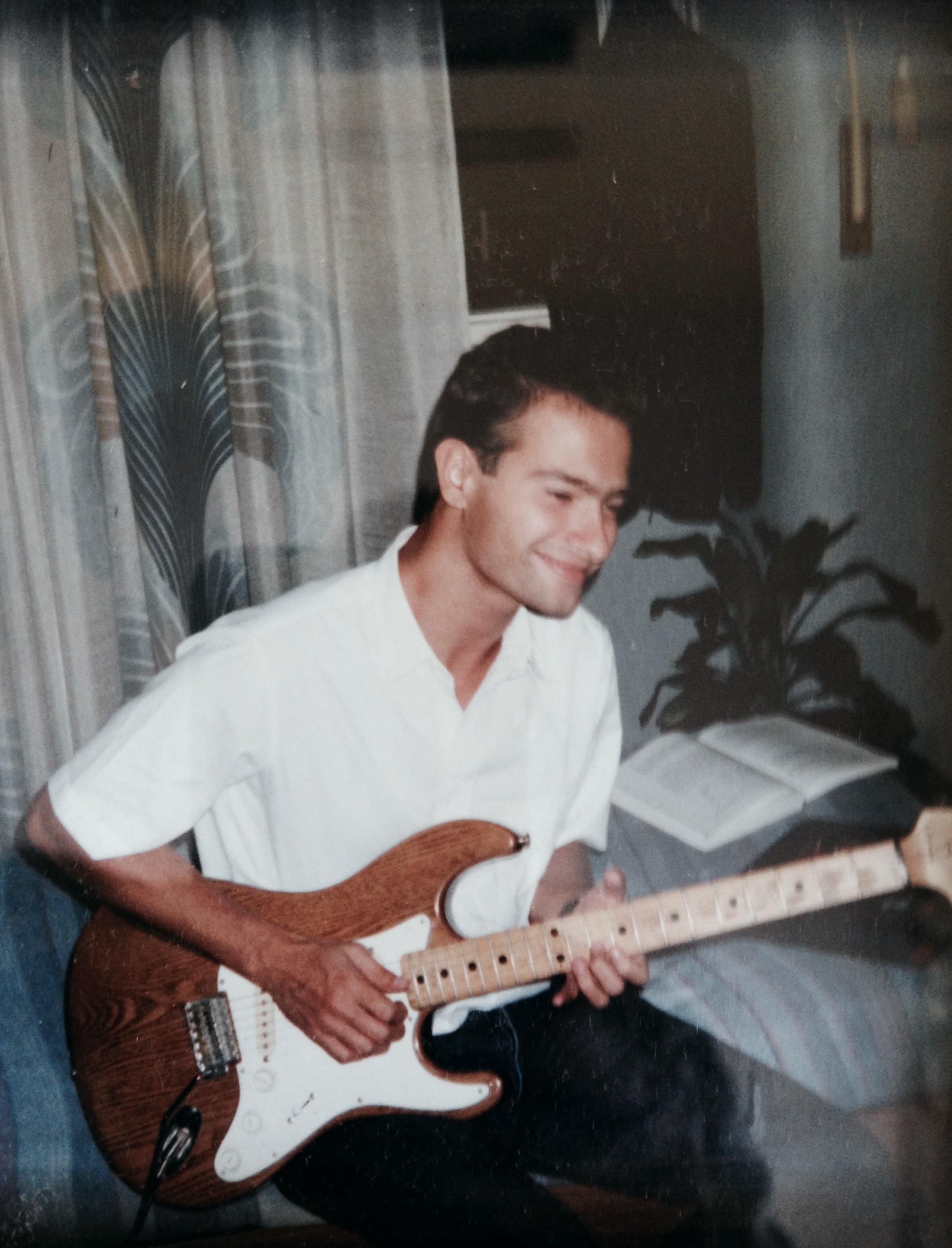 Here I am with my first beloved electric guitar

On December 17, I had played with my new band in a restaurant. My first live gig. Thrilling! I didn’t have time to rejoice because not even a week later the uncle for whom all this music had begun passed away. Another week more and the other guitarist passes away, really unexpectedly. It was a bad blow to the band. It could have all ended. We actually slowly resumed with the takeover of another guitarist. We organized a concert in memory of the departed friend. It was an unforgettable event, with his son singing with us and the other bands of friends preceding us on stage. It cemented our bond. And I would even get a job after a few years, hired by the other guitarist who had since quit playing with us.

2016 had started badly and ended worse. It was only the first of a 3-4 year stretch of economic hardship, which was not quite over as the aftermath of accumulated debts propagated into the future. The tragedies had not ended either because in February of the following year a car accident would take away the young son of a friend I had not been in touch with for some time. A boy who had just become a father, who died right after seeing his newborn daughter. Now that was a real tragedy. Inconceivable. I saw my friend again a few months after the heartbreaking funeral. Great strength of spirit. He told me that he started playing guitar….

The concert for our departed friend

These are things that get your life back in the right proportion. The lousy 2016 had taken away my job and two loved ones. But that’s life. The show goes on. It has to. In the same year I found my true essence again, music played, performed by me. And in that dark period, thanks to the guitar I kept the light on; that year I was able to see my son grow up every day, which I couldn’t have done if I had been at work. I play in two bands now. I have a job. The difficulties are there, and music helps to deal with them. That has changed me. I used to be a staunch aikidoka but something broke and maybe allowed what I really am to re-emerge. So today, on Christmas Eve, I am wishing a happy holiday to my cousins who exactly 6 years ago had lost their father, who started me on the guitar even before they were born.