How do you listen to your favorite music? Do you feed a CD to the player, hook earpads to your iPod, or organize playlists on the computer? Are you staying seated while listening or hang around doing other stuff? I’m guessing: first choice is earpad listening on the move, second choice is listening in the car, third is a cheap system with CD player and loudspeakers included. How many are today interested (or even know it exists) to a way of listening to music infinitely more enjoyable than the above mentioned? Just a few, I believe, really few. We’re in such a hurry today that we just can’t afford a relaxed listening session of good quality, one that would be focused on music only, with proper tools, the only ones that could guarantee for a sensational experience, similar to the “live” event: a source, and amplifier and a pair (meaning 2) properly placed loudspeakers.

In a movie theater we sit comfortably, lights are down, the hall is silent (hopefully) and we are doing nothing else, we are immersed in the movie, which we’ll enjoy uninterruptedly for a couple of hours. It is the same with music: we go to a concert at an auditorium, stadium or theater, where we concentrate on music only. You can also do this at home. Well, it was really fashionable years ago. Today’s trend is the home theater. The high-quality stereophonic system, with just two loudspeakers (better if floorstanders) is a rare thing: when would we find the time to sit down in front of our speakers and enjoy, say, one hour of our favorite music from a system that would be able to reproduce a really high-quality sound?

The idea this would cost a lot of money is false. With a few hundreds of euros (sometimes just a couple) we could set up a real worthy system. But who’s going to do it? We all have a computer. We could make it play very well. The trick is ripping CD tracks with no compression (lossless formats are the Wav on PCs, Aiff on Macs – forget the MP3). Then we would need a digital-to-analog converter to be plugged to the USB socket in order to make the computer play (bypassing its audio output!). The converter is connected to the amplifier, which feeds two loudspeakers. That’s it.

That would be it. I don’t think it would be easy to find anyone that would possess (and use) the basic trio consisting of source, amplifier and speakers. If I’d find one, I can already picture the two poor loudspeaker randomly placed where they are less visible, where they’re not in the way. Maybe they will be placed side by side or high up in a bookshelf, recessed among books or even on their sides. It’s more likely they have been gotten rid of, replaced by a good-looking, less bulky, all-in-one system that would connect a smartphone so it’ll be possible to continue listening back home with no earpads. No, I just can’t picture you doing so, my dear hypothetical readers. As of today I know just two people (maybe 4?) who in the past cared about purchasing the right high fidelity equipment. I’m completely sure none of them has placed the loudspeakers correctly in the listening room. And I’m also sure none of them really use it. I can understand that many would think this is not a major problem; it is kind of a caprice, or even a waste. But why?

It is true that now high fidelity is a niche product, something for strange people who maybe still listen to vinyl records. But I can assure you vinyl records are still the only media capable to offer a really captivating, exciting musical experience, considered how much we are used to listen to the garbage around us:

So, what is high fidelity?

It is a system that allows reproducing a musical event at home in a way that is as close as possible to the real one. You really get the impression that the musicians are playing in your room. The singer materializes right there in front of you, you can perceive her moving lips, you can hear the guitar player’s fingertips sliding along the strings, the noise of the trumpet’s piston valves. You don’t need the same gear used for live performances, it is a completely different matter. Filling a square with sound, as well as an auditorium or a theater, has nothing to do with filling a room. There is purposely designed equipment for home listening, where the needed power is very low and the achievable sound quality can be very high. Believe me, with 2-300 euros it is possible to buy a minimal system that would allow listening to music in a way you would have never imagined, even if played from a PC. 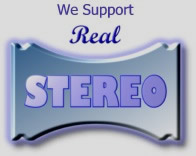 You’ll be surprised to know that the foundation of all this is the stereophonic sound.

Alan Dower Blumlein invented it in England in the 30s; he had first experimented with multi-channel audio only to be convinced that a realistic musical event can be recreated by using only two channels. He developed the first prototypes for EMI along with the whole production chain, starting from the recording techniques. A good stereophonic recording can reproduce a complete image of the musical event, including the position of each instruments – even in depth – capturing the entire audible waveband as well as the acoustic characteristics of the recording room.
This can be achieved with just two properly placed excellent microphones (almost like they were a couple of ears: 2 microphones = 2 ears = 2 loudspeakers). A much elaborated multi-track studio recording loses all this information which is the key to a captivating listening. A multichannel reproduction may have some sense for cinema effects, but just in a certain kind of films. Expenses being equal, a stereo system is way superior sound-wise to a Home Cinema system; it would also playback the movie soundtracks much better.

As a matter of fact, when we are watching a live concert we are not among the musicians, we are in front of them. We don’t need loudspeakers all around in order to reproduce the reflections of the original concert hall. That information is already in the stereophonic recording. Reflections are taken care of by our listening room, which is 50% or more responsible of the playback quality. This is not possible by wearing earpads, in the car, or with loudspeakers tossed around where they are less obtrusive.

The main requirements are about the 2 loudspeakers placement, main responsible of the system’s sound quality:

As a source you can use a CD player or a computer; the turntable, if well set up and isolated, recording quality being equal, is still the best sounding, more captivating and exciting audio reproduction equipment.

These are the basic rules, otherwise it is pointless to invest money in this – you wouldn’t ever listen to the actual capabilities of a real HiFi stereo system. After all, a Home Cinema system has far more complicated placement requirements, hasn’t it?

I am well aware that many are not a bit interested in all this. A good portion of the uninterested, maybe, could change idea if they knew certain possibilities do exist. The problem is our ears are not used to high quality audio. Any special effect of the Home Cinema kind would impress anyone who is not used to distinguishing between a realistic sound and a “pumped-up” sound, one that has been altered, enhanced so that it would instantly impress (=sell). Proof is the fact that the music industry, well aware that the few music people are buying they’re also listening to it through earpads or small PC speakers, has started long ago to compress the records’ dynamics (volume differences between high and lows of a track). Often, the artists agree. The discerning ability of our ears is continuously decreasing. They are no longer trained to tell an awful sound from a good one. We are used to the sound of our flatscreen TVs, of our earpads, of our PC speakers. When we listen to a rumbling 250-euro Home Cinema system (while distracted by the spectacular extra-large plasma screen) we are left with gaping mouths. But it is just an illusion. Trust me: a 250-euro HT system sounds far worse than a stereo system of the same value. Imagine systems at 1000+ price tag!

Why do I care so much? I love Music. As a Music lover I like to listen to it in the best way possible. I admit I rarely use an iPhone to listen to my favorite music on the move, but I make sure I rip the files from my CDs with no compression at all. OK, they will occupy 10 times the storage of compressed formats, but I prefer quality to quantity, even when I’m having a walk.

If we let things go on like this, if we let the music industry continue to compress the dynamics of our records with no protests, if the audio business will continue to convince people to buy low fidelity systems, what will be left for us “audiophiles”? Finding true high fidelity components would become hard, same for well recorded music. Listening to Music in the best way possible would become a memory of the past. Even a rapidly fading one, since our ears forget faster than our eyes. Therefore, I’m willing to give my small contribution by pointing out valuable efforts for spreading the knowledge of quality audio.