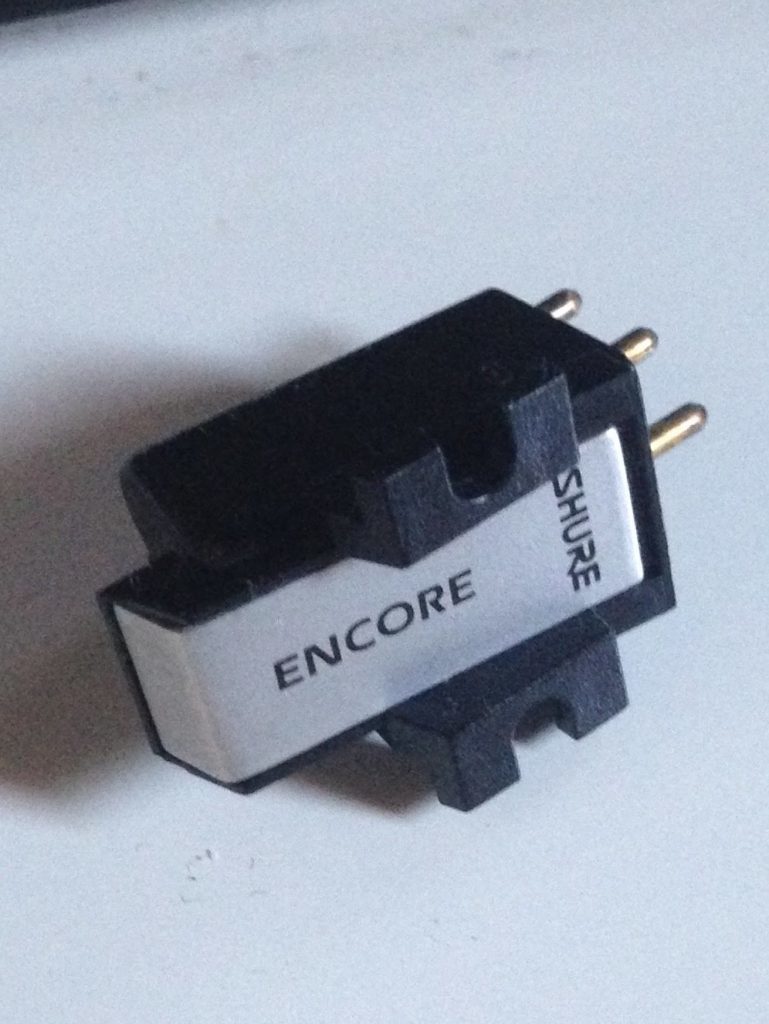 I’ve always been fond of Grado cartridges, because I simply like their sound and also the fact they’re hand made in Brooklyn in a way that seems quite anachronistic today. I will probably keep loving and admiring the Grado way of doing business, but after I stumbled upon a humble Shure cartridge someone was about to throw away, I am not “shure” I will be listening to my records only through Grados anymore…

Sometime during 2017, someone told me they found an old turntable and that it was going to be trashed. They asked me if I wanted to have a look at it before they threw it away, just in case. Well, I don’t even remember the brand of the cheap deck. It was not working, I could not do anything about it. I trashed it myself, but I kept the cartridge. The brand name demanded it to be saved: Shure.

The model was clearly written on the cartridge side: Me97HE “Encore”. It was not easy to find information about it on the internet, so after a while I convinced myself it was not really worth keeping. I decided to try and sell it. Any reasonable price would have been good, since I got it for free. So I started asking for 40-50 euros. Someone asked me if I was sure it was still working but I had no stylus to try it (nor money to spend even on cheap ones at the time). I checked with a tester and the connections seemed to read all fine. But the potential buyer – luckily – disappeared. I later saw similar carts at much higher asking prices, around 80 euros, so I raised mine. Luckily – again – no one stepped forward.

I had been very clumsy with my cartridges later, two Grado bodies and a Gold1 and 8MZ styli – I managed to damage both. I had no working cartridges for my Thorens TD-160. So I started researching again about the mysterious Shure. 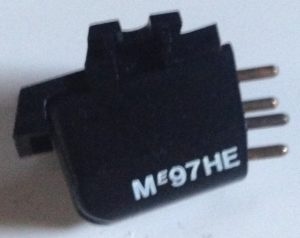 Some enquiry in certain forums clarified the issue. The venerable M97 cartridge from the 70s was highly regarded by the fans of the brand. It was a small step below the legendary V15 IV of its era, and some even preferred it over the latter. The Encore series of the 80s where cheaper reissues of the best models of the 70s. As they were made in Mexico, some regarded them as poorly made, or at least of variable quality due to supposedly random QC at Shure Mexico. Meanwhile, Shure had quitted the turntable business altogether and prices of carts and styli were floating. I’ve found some Me97HE ads at over 100 euros! The V15V is absurdly high! I started finding good opinions about the Me97, too. Apparently, the insides of the cart are the same as in the original M97 and electric measurements were the same as for the V15 IV and V (though different circuits). Wow! I needed a stylus for a try!

The HE suffix stands for the hyper-elliptical shape of the diamond tip. Incidentally, the latest Shure cartridge ever produced was an M97, the xE, with an elliptical stylus and a much debated roll-off at the highest top of the frequency response (supposedly adopted by Shure lately, due to complaints of shrillness in expert reviews). Many do not like this – the Shure V15, M97 and the likes, were highly appreciated for their flat response. Apparently, my Me97 has the original flat response in its potential.

The Japanese Jico are well known for their excellent aftermarket styli for Shure cartridges, but they are expensive.

Then I came across an ad about a used Nagaoka M97ED replacement stylus. It was an elliptical, not a hyperelliptical stone cut, but it had the dampening brush and telescoped cantilever. And it was just 28 euros. I just couldn’t spend much more for a cartridge I didn’t even know if it really was in working order. So I went for it and …wow!

As soon as I heard the first sound from a single channel (one of the headshell leads was not correctly connected) I was taken by surprise. After I connected the lead well, I was amazed. The deep, full, no-nonsense, down-to-the-earth sound that came out of a 28 euro stylus on a cart I had for free was simply astonishing. What if I had a real HE stylus for that?

This unassuming little plastic Shure cart from a cheap and small turntable is making me question my own love affair with Grado cartridges. I will need to know what this can do with a proper top quality hyper-elliptic tip. For a while I doubted it would have been worth spending money on a brand that doesn’t exist anymore. However, Shure had never supported old cartridges, and they wouldn’t have supported the old Me97 too, even if they were still in the business.

I just wish I could hear this cart with a Jico SAS HE stylus or similar. I’m not Shure I would ever part from it…