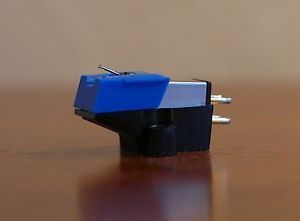 A few months ago, I wrote a post about how I was no longer sure I still liked the Grado cartridges’ sound: I had found a Shure cartridge for free and with a cheap stylus mounted on, it sounded pretty good to me. Better than my old Grado 8MX? Well, a newly acquired friend sold me an Audiotechnica AT95e cartridge for an incredible price – I was blown away (yet there’s more to be said).

It must be said that the Shure Me97 I am talking about is running with a cheap elliptical stylus from Nagaoka. Not a bad stylus, but the Me97 comes with a HE suffix: meaning it should be equipped with a hyperelliptical stylus. It should deserve a Jico SAS stylus for example, or a microline, this must be highlighted before I go on and say how the “old” AT95 blew the Shure away. Of course it did – but not by far and I don’t think I will be able to afford a Jico stylus for upgrading the Shure in the near future. Plus, I’m not talking about the new ATV95 series, just the old and famous 50 dollar worth AT95, the best cartridge bargain ever possible.

One thing in favor of the AT cart is that it has a lower compliance than the Shure, more suitable to the mass of my Thorens TD-160’s stock tonearm. We recently moved to a new town (again) and now my Hifi system is sitting on a floating floor. As we walked, the Shure jumped on the records. The AT couldn’t care less if our son was even jumping on the floor… The AT95’s compliance surely makes for a better resonance frequency. Later I managed to setup the Shure very well, and running it at 1 g (= brush down and 1.5 g VTF) I reduced the bounce a lot!

But this new friend of mine also included a fine hyperelliptical stylus for the AT95! The bundle is certainly worth over 150 bucks. Well… the definition and the separation are amazing. But one more thing to be said: for over one year I have not been able to listen to my Grado Signature 8MX cartridge in a proper way. The 8MZ stylus I was running it with fell from my hands and was damaged. No wonder even the humble Shure/Nagaoka bundle sounded better. Now I have a cartridge that my system deserves. I had just upgraded my amp to a nice Naim Nait 5i, I bought used and cheap (but high quality) low-capacitance Qed speaker cables for it, and the new room seems to sound quite good, too. It was time I unveiled – again – the true potential of my analog system.

Still, I’m waiting for my Grado 8MZ-V stylus to come back from the US, where it had been sentenced as beyond repair (it sounds decently, but low separation). I also bought a Grado Black2 stylus to try it with my Gold0 body – I could be surprised. In summary, I’m impressed by the Shure performance even if downgraded from HE to ED. The AT has more resolution (with the HE stylus) but it is famous for its tendency to the harsh side. The Shures of the time were known for having a flat response. I seem to slightly prefer the Shure in general, while I love the details from the AT. And the Grados have superior midrange – supposedly, a stylus upgrade would balance the response and shatter the rivals.

So the last word has yet to be said … or written…