on I’m no longer in the Mood… 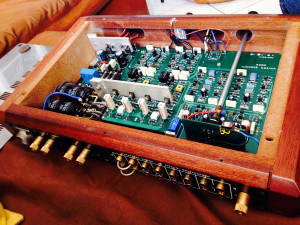 For almost 30 years my system has been centered around one beautifully made Italian integrated amplifier produced by a company that is still famous for their top-quality valve amplifiers: Unison Research. My unit was their first attempt to a total solid state design, the Mood, which was inspired to the very similar Sonus Faber Quid, from another Italian brand famous for their excellent loudspeakers rather than their amps.
I have been thinking of replacing my elegant wooden-chassis integrated with something more modern and maybe more performing. It was not easy. The memory of the day I bought it, right before Christmas 1991, with my father opening his wallet to help me pay the price, is still vivid in my mind. But yes, we’re talking about 1991 (well, the end of it). A lot of time has passed and technology has made giant steps. I started trying to sell it at rather pretentious price tags at first, both because I needed money and because I actually didn’t want to give it away. Later I focused on what I wanted to obtain from the sale: I was not in the position to spend much money on hifi equipment; one idea was selling the Mood and grab a cheap but performing Class D amp like the Dayton Audio Dta100, and keep the rest of the money for more important stuff. Then it dawned to me that I could try to make a no-cost upgrade if I lowered the selling price to something that could afford me a good integrated with much less years on its back.

When I started assembling my system in late 1991, I was adamant I wanted that exact model of loudspeakers: the TDL Studio 0.5. I wanted the transmission lines, I wanted that bass! But I needed the right amp for that difficult load. Many dealers advised me to go for the Naim Nait 2 or similarly capable integrated amps. So why not going now for the most recent Naim I could afford?

My researches brought me to the Nait 5i version of 2005-2009. The good news is that it was the first Naim amp not to be as capricious as to need special speaker cables (Naim branded) or DIN connectors. It was reportedly also a great improvement over the preceding Nait 5, that still retained the need of DIN connections. The price was right, so I accepted an offer for the Mood at a lower price than planned, and went for the first Nait 5i I could find on the Internet. The German eBay had a rather inviting offer, one specimen with reportedly few hours of playing, 1-year warranty, original box, like-new aspect. I jumped on it and then I started to fear it was a scam. I wrote the seller to inquire about the warranty and he told be to refer to the local Naim dealer for it. After I paid, he didn’t reply to my messages. Everything was too good to be true. The pictures were so clean and perfect (identical style for all the items for sale) to seem taken from the designer’s website. All the eBay dealer’s ads were exact copies of each other, except for the name and specs of the items. I started to fear I fell into a hoax. I just hoped in the Paypal protection and waited for the planned delivery date. It was fast. Incredibly fast. I expected an empty box, or a small one with something else, or an envelope with a fake invoice. Instead, a mint Naim Nait 5i was actually there, enveloped in cellophane in the original box. Absolutely fine!

I was so suspicious of a scam that I was not convinced yet. So I started to see something wrong with the amp. It didn’t seem as deep as my old Unison in the lower range. In order to get satisfying volume levels I had to turn the volume knob well beyond noon, even at 3 o’clock if I wanted real impact. No way I could go over noon with the Mood! It means nothing, and I knew it. But I wanted to see a hoax somewhere. Even because the seller did not reply to my inquiries about how many actual hours the Nait had been playing. Was it a faulted specimen? Did it need service, recap, because it had been idle for years? Why should Naim care about the warranty of a 13 years old amplifier?

Then I had some bad news from the new owner of my Unison Research. He is a capable technician and he opened the Mood in order to plan a recap. He immediately noticed there was something wrong with the unit. Actually, after 2 years of use, it stopped working and Unison Research repaired it for free because it was still under their 3-year warrant plan. I just paid for the shipping back and forth. Well, apparently they did the job on the cheap. The 4 white resistors you can see in the picture above and below are clearly replacements and are also of cheap make. They are the power stage resistors and should be of good quality in order to assure a transparent performance.

Many other resistors and caps were blown when the power stage shorted, back in 1993. A couple of tracks on the board had been soldered, and several caps and resistors replaced, most of them with cheap components. In one occasion, one in a couple of very good caps from a Japanese brand was replaced with a good cap but of another brand. A well-done job would have included the replacement of both, since they are on the same track.

I have been listening to a Unison Research Mood that had never been at top-performance. For almost 25 years I listened to a crippled amplifier and I had no clue about it. I just trusted Unison Research with having given back to me an amp that was like the original project, but it wasn’t.

After the sort of panic about a possible scam dissolved, and after having acknowledged the conditions of my former amp, I started to hear how good the sound was from my new English amp. Like Naim suggests, I’ve never turned it off for several days and sometimes I kept it playing while I was away. The transparency was the first thing I noticed. But the low range is no slouch. The bass is controlled and deep. Maybe the Mood appeared stronger there, but it was only just less defined and controlled. After all, I was used to its sound, I listened to it for almost 30 years. When I got the Naim, I had some problems with my sources: my Grado 8MX was waiting for its 8MZ stylus to come back after retipping; my Cambridge CD had some problems in reading discs. I didn’t have a really good source to test the Naim with. But suddenly the slightly defective D500SE CD I had recently bought started to swallow some discs once in a while and I had the chance to really listen to the Nait 5i. Wow! With the Mood used to I compare Spotify or Apple Music streaming through the Apple TV hooked to my Project DacBox E with the CD player through the same Dac, I couldn’t really appreciate any major difference between the two streaming services and a real CD. Now the difference is there in plain sight. 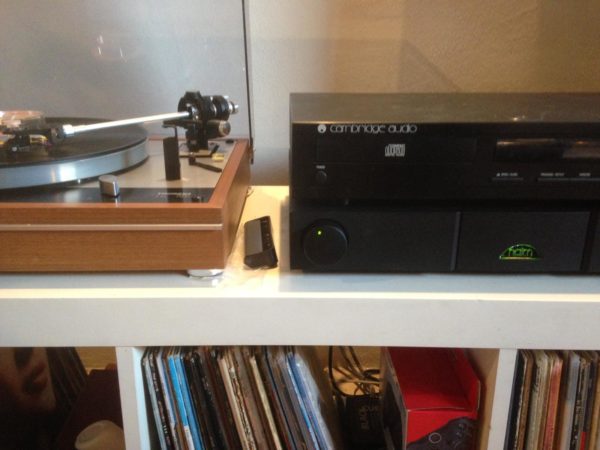 After I damaged my 8MZ stylus, I bought a cheap elliptic Nagaoka one for a Shure Me97HE cartridge I got for free from an old turntable. I was surprised by the good sound that came out of it, to the point I was questioning my appreciation for the Grado sound. Now I also have an Audiotechnica AT95 with hyperelliptical stylus and I’m still waiting for my 8MZ to come back retipped. The Naim well exposed the limits of the Shure with the elliptical stylus. In fact, I’m no longer convinced of its sound since I have plugged the Nait in. Real audiophile amplifiers highlight the issues and the limits of other components or recordings. Maybe that’s what I was hearing when I was convinced there was something “wrong” with the Naim. Actually, something was wrong in the sound I was used to. But I still wonder how the Mood would have sounded in the right conditions.

Now my system has become rather English: Cabridge, TDL, Naim… and a German turntable and phono preamp with American and Japanese cartridges. For years I had dreamed about upgrading my Unison Research amplifier with a newer Unico integrated.

But I’m no longer in the Mood, the Nait has come…