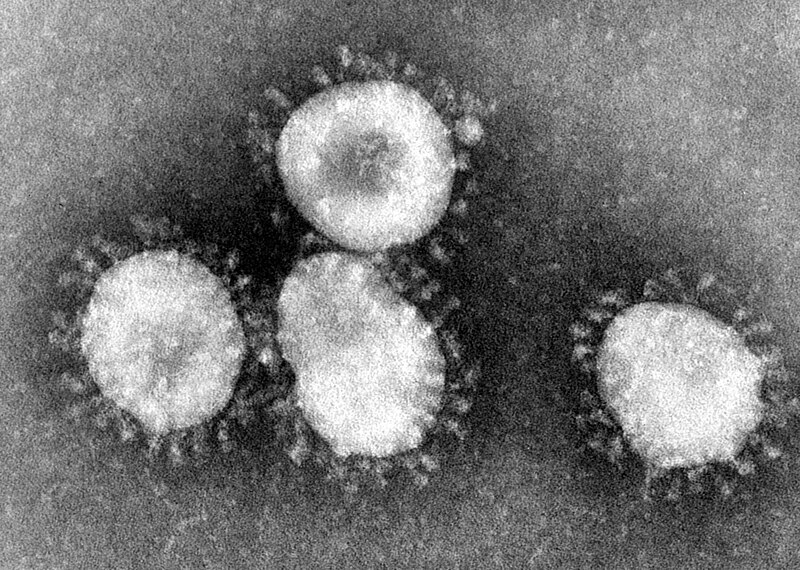 The word virus comes from the Latin term for poison. I mean, that’s not a good start. Most people don’t believe that viruses are a life form. In biology, living things are divided into 5 kingdoms: bacteria, protists, fungi, plants, animals. Viruses are not included because they lack a fundamental characteristic of living beings: the ability to reproduce by themselves. Put a virus on a table and don’t let it get in contact with anyone and it stays there without moving or changing. But in contact with the right cell, there it “animates”, reproduces and spreads. Then it can be trouble. But the luck lies in the fact that viruses are extremely specialized: a given virus only attacks certain types of cells of certain living beings. And it can also be useful to human beings… 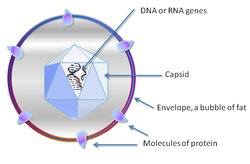 The virus is nothing more than a capsule containing genetic material (DNA or RNA). The capsule is made of protein and is called a capsid. The whole is covered by an envelope of lipids (fats). For example, the corona virus so famous these days is called this way because it has an envelope that looks like a crown under the microscope (picture above). The genetic material in a corona virus is always RNA. Many other viruses can have DNA. There is not much difference, it’s just that the sugar base of the RNA molecule is made of ribose. The ribose of DNA lacks one atom of oxygen and is called deoxy-ribose = that’s the D in DNA. This sometimes leads RNA to be single-stranded, not the famous double-stranded DNA. The biggest difference is in one of the 4 components that form the famous DNA “rungs”, which is different in RNA (see figure below). 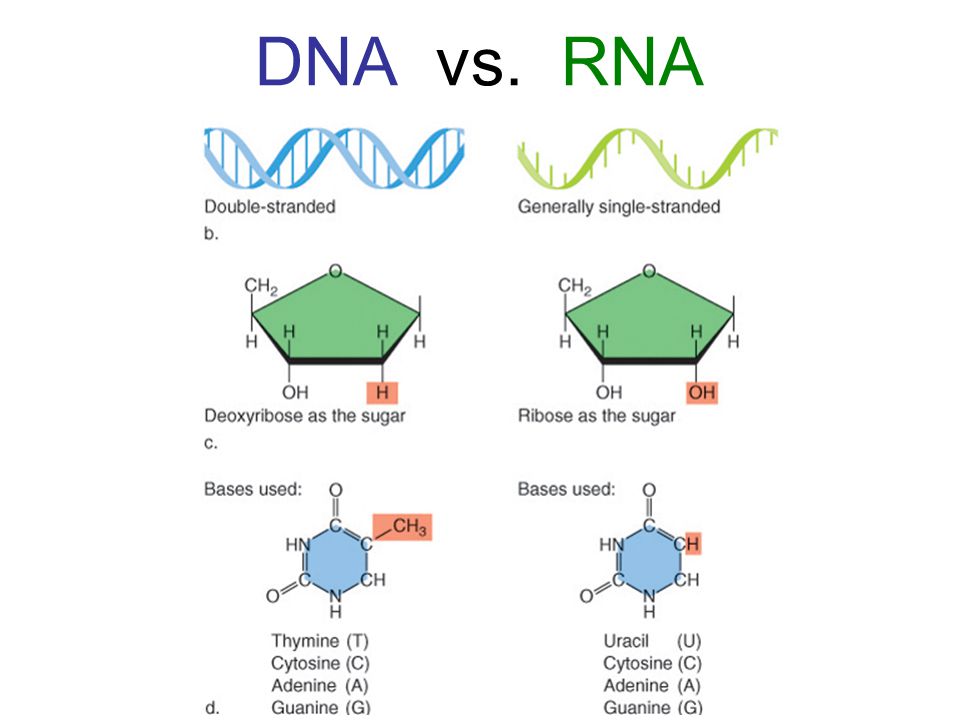 Replicating genetic material is the gift that living beings have allowing them (us) to reproduce. The virus cannot do it alone. It must use the reproduction mechanism of living cells. So it must find a way to enter a cell (much larger than a virus) and release its DNA or RNA inside it. Sometimes it makes the cell believe that it is food and gets itself absorbed by the cell. Or it can somehow penetrate its outer membrane. To do this, viruses only specialise in entering certain types of cells. This is why, for example, there are viruses that affect humans and others that do not, viruses that do not harm us at all but affect certain animals. And then they only do so in certain parts of the body: the cold virus can only enter our nasal mucous membranes, for example. I mean, they’re highly specialized. Fortunately.

When the cell violated by a virus begins the process of DNA reproduction, the virus gets in the way and uses the coding system of the infected cell to reproduce its own genetic material. A virus therefore takes possession of the cellular reproduction system and forces it to copy its own information instead of that of the host. A real and proper hijacking. In this way the virus generates many copies of itself in the occupied cell, consuming its resources and ending up destroying it. The viruses thus multiplied are free to go and infect another cell each.

Spreading into the body of the infected being, the virus replicates itself further and modifies itself, evolving from generation to generation. These days the corona virus attacks only cells of the human respiratory system. It is said that it started from animals, i.e. it was specialized to infect certain cells of certain animals (probably a bat). But as it evolves, at a certain point it can acquire the ability to insert itself into cells of different animals, including humans. 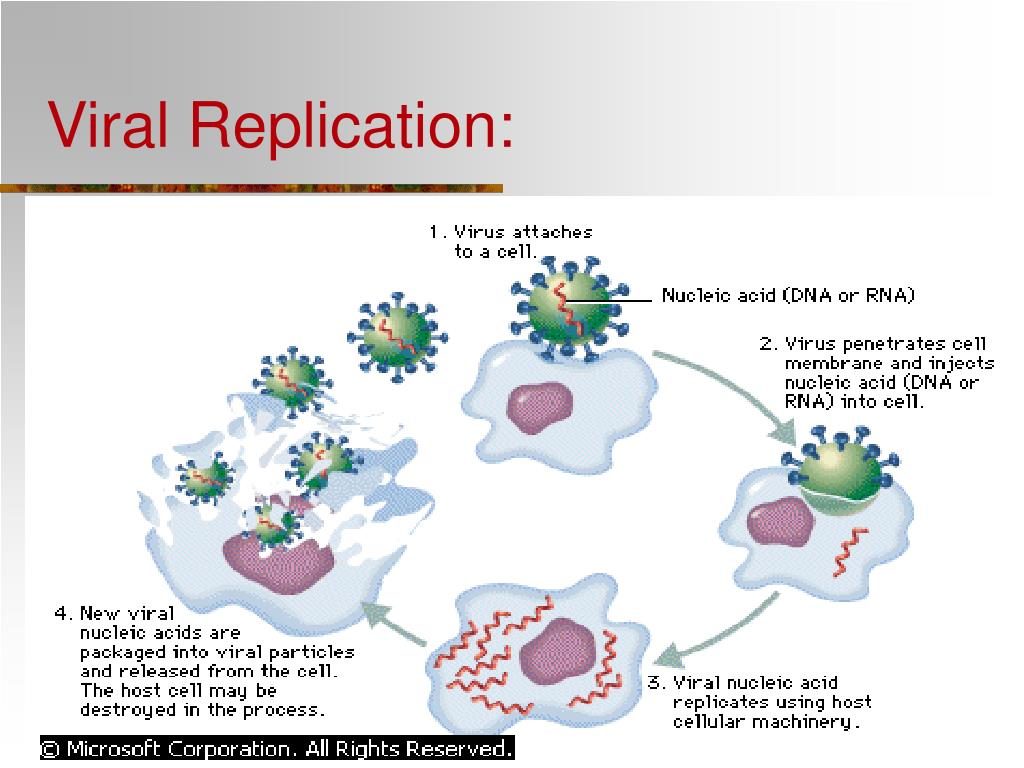 It is important to know that most viruses are non-pathogenic, i.e. they do not generate disease. Only a small percentage do and maybe it is just a cold, a sore throat, a simple flu. Few are really lethal, like HIV, being specialized to infiltrate the cells of our immune system and insert their genetic code in ours (retrovirus).

Come to think of it, it’s “stupid” for a virus to destroy a system that keeps it alive. It also means its end. In fact, the evolution of viruses once other living beings are infected, leads them to become less harmful over time. An evolutionary process that allows the virus and the host species to survive. It is hoped that Covid-19 will also gradually become less harmful for this reason.

Several colds and sore throats are caused by coronaviruses other than the current Covid-19. There are different types of coronavirus. Like other types of viruses, they can coexist with us and many viruses are thought to have participated in the evolution of life on Earth by generating genetic mutations during their interference with the DNA of species to which they bind to reproduce. Probably many new species have been born from mutations caused by viruses since the beginning of life on Earth. It is estimated that 5-8% of the human genome is derived from retrovirus genetic material.

Some forms of viruses are specialized in attacking bacteria, living organisms made of a single cell. They are called bacteriophages and can be useful for this reason. Some bacteria are infinitely necessary to us, for example those of the intestinal flora that help us digest. Others, like certain viruses, bring us even serious diseases. Thanks to the discovery of antibiotics we can fight various bacterial infections, but also the bacteria, as they reproduce, change and evolve. The few who survive a massive slaughter by antibiotics pass on their genetic material, resistant to antibiotics, to their future generations and man has to use different types of antibiotics to fight them. It is getting to a point where some bacterial infections are no longer treatable with antibiotics. It is very dangerous. That is why it is good not to use antibiotics unless strictly necessary: a virus does not care about an antibiotic. While the cold or flu virus is using our DNA to replicate its own, we suffer from sore throat, cold, fever. If we take an antibiotic, we give the virus a break. The virus cannot be cured, you can relieve its symptoms while waiting for the immune system to take over. There are very few antiviral drugs, most of them are developed in trials to fight HIV. We can prevent or limit contagion by using vaccines, essentially made of the same “dormant” virus, rendered helpless, so that the immune defences are unleashed before the “awake” virus arrives and are well prepared for invasion to limit or avoid damage. If the infection is due to bacteria the only solution is sometimes antibiotics, in the hope that the bacterium is not an evolved form immune to them. 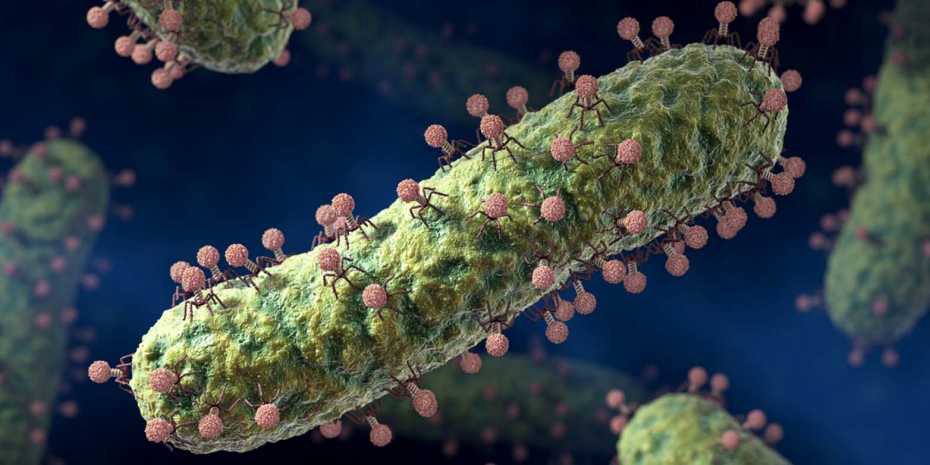 Here, however, bacteriophage viruses, the fierce enemies of bacteria, could come into play. Their capsid has a kind of needle with which they inject the genetic material into the bacterium. At the moment of duplication, the genetic material of the virus gets into that of the bacterium replicating itself in its place, generating different copies of itself that destroy the bacterial cell and spread in search of others in which to inject its DNA or RNA. We are trying to create bacteriophage viruses that are extremely specialized in infiltrating certain bacteria that are harmful to us but that are totally harmless to human cells. This is the solution to the increasing immunization of bacteria against antibiotics, also due to our thoughtless use of antibiotics (in practice we use them so much that we have “accustomed” the bacteria). We can treat bacterial infections with viruses instead of antibiotics. Just as there are good bacteria and bad bacteria there will also be good viruses and bad viruses.