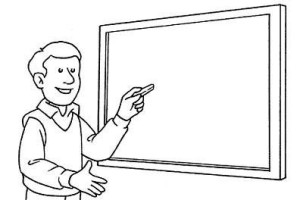 In high school I had my head among stars, galaxies and nebulae, I wanted to be an astronomer and I had a math and physics teacher who made me dream. Perhaps he was responsible if I became passionate about science until I got a degree in this field and it was thanks to him that I was able to develop the skills to succeed. When I enrolled in that institute and I happened to be in that class, someone was warning me about serious trouble from that professor, a madman, out of his mind, a real nutcase. Others considered him a genius, with a teaching method of his own, very difficult to follow. I mean, the advice was to change class.

Lucky I didn’t. I still remember how carefully I followed his speeches on relativity, the fourth dimension and time travel. I listened to him fascinated when he tried to make our heads work without giving us definitions, but pulling them out with our own reasoning. He guided us to the solution but he didn’t give it to us, he didn’t serve it on a silver platter. It was up to us to understand, to use logic and to find the answer autonomously at the moment of the quiz, which took place once a semester, without appeal, without

being able to average the scores from the whole year. It looked a little like a college exam. People talked so much! What’s this about? What is he talking about? Who understands him? Why doesn’t he explain things? But me and a few classmates (now that I think about it, the ones who were still able to use their imagination as children do) were fascinated and we did everything we could to keep up with him. We liked the challenge, yes, but we felt that this way of studying was particularly stimulating. It was original, it pushed us to use our brain in a different way, out of the box, as out of the box was also his behavior in class, when for example he stood up on the desk to lecture, to show us that certain rules only serve to bridle the thought. 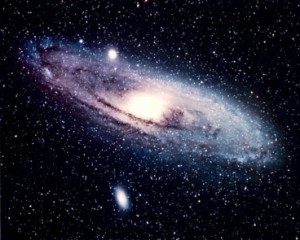 So nice to remember the discussions in class about what the number was, the basic concept of the subject in question. How can we study mathematics if we do not know what a number is and how the human mind came to develop its concept? Memorable lectures, never forgotten, solutions to problems and basic concepts of mathematics and physics that have remained indelibly imprinted in our memory because they were grasped with our heads, not provided with an academic explanation to be passively accepted for the authoritativeness of the source. It would have been easier, but what would have been left of it? Instead it freed our minds, it gave us the means to do things ourselves, the confidence to know how to use our brains to deal with any problem. That’s teaching. After graduation, I went to find him to thank him. Without him, I couldn’t have graduated in a scientific subject. I’m aware of that and I’ll never forget it.
I enrolled in geology almost by accident. I wasn’t convinced. The geology and geological survey classes of the third year, however, were held by the greatest teacher I have ever known. The ability to capture the attention, the passion he transmitted, the simplicity to which he reduced even complex concepts transformed his lectures into a didactic show, into a real scientific documentary. It was compelling! At the end of the hour I was disappointed, it always seemed too early. It was so beautiful, intriguing, interesting and engaging that I was looking forward to the next class to see how it would turn out.

Drifting continents, expanding oceans, volcanoes and earthquakes that dotted their margins, subduction trenches that generated mountains. What a spectacle! His lectures were dreamy. But the geological survey on the ground was no less. He wasn’t there to describe the outcrop, he wanted to hear your description. When faced with a geological problem, he didn’t explain the solution. He wanted to hear your hypothesis.

The ability to capture the attention, the passion he transmitted, the simplicity to which he reduced even complex concepts transformed his lectures into a didactic show, into a real scientific documentary. It was compelling! At the end of the hour I was disappointed, it always seemed too early.

When at the end of the course we went to the examination presenting our first geological map, he did not expect it to be as he would have done it, but he demanded that whatever the result was, it had to come from a plausible geological model based on the data and means, then rightly limited, that we had at our disposal. In short, he wanted us to use our brains.
The passion that this great teacher handed down to us with his legendary documentary-like lectures, as I used to call them, sustained me during the long dark years of unemployment, doubts and consequent depression. If I was able to get the geological job I’ve always dreamed of, I owe it to him. The strong foundations he gave us in the classroom and on the field, the great passion for geology that exudes from his very being were indispensable to hold on, not to give up and chase the dream, until reaching it. I also thanked him, even if my geological dream has unfortunately been lost. However, thinking about him and the high school math teacher, I am heading towards teaching too. God knows if we need to improve science education in this country…
A long time after graduation, after the dark period, once I finally got my first professional satisfaction, I happened to enroll in an aikido course and was literally struck by it. I can’t thank my first teacher enough for having introduced me to this wonderful martial art focused on human enhancement and not on overpowering. It is said that once you reach the black belt you begin to be an aikido student, you begin the Path, a way of life in which each of us has our own personal motivations. Around that time I discovered that a teacher who had already been introduced to me long ago seemed to be worth more than what was normally given to him. I remember that the first time I participated in one of his seminars I was also a bit worried. Someone was talking about it in unsettling terms, describing it as a real monster, to be feared in his reactions. Just think that word had even spread among us that he had been in the Foreign Legion. That’s crazy! But the more I knew him, the more these rumors were disproved. The more I heard him talk about aikido, the more I found out I agreed with him. He surprised me by quoting Castaneda in class, explaining how to really use wellness techniques, circumstantiating it with evidence derived from his deep knowledge of physiology and biomechanics of the human body, derived from a degree in osteopathy. This instructor does not explain the techniques, he stimulates you to get there on your own, he does not want you to be a slave to form, he tries to give you the means to find your own way. Of course it’s more difficult, others explain well what to do, by and large and, let’s face it, that’s also very useful. But this guy wants you to get there at the right time, when you’re ready. And when it happens, what you will have discovered will be yours and it won’t be mere form, it will be something that will make your spirit, your mind and your body free, something you won’t forget. 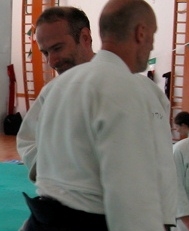 It’s not an easy relationship with a teacher like that. You have to forget about public satisfaction, in fact, you risk derision. Satisfactions come after great efforts and long suffering and are only personal, they will remain within us, just as often happens in life. It’s an intense, suffered, sweaty aikido. Without sacrifice nothing is achieved. Remove the false modesty, the courtesies of circumstance, put down the mask that we wear every day. Here it is not possible to hide one’s being, it must be laid bare, with all that it entails. It’s not easy, you have to really want it, feel the need, be able to question yourself every time, a bit like in psychotherapy. There is no way to take refuge in the certainty of technique, of form: as soon as you delude yourself in this sense things change, certainties collapse, to cause an inner imbalance again, often unpleasant but profitable. It is the only way to grow up even if you are already an adult.
Genius and unruliness are a classic cocktail that makes the interpreter of an art (martial and not) stimulating where it counts, not on the surface. Some character peculiarities can be a social disadvantage for such a teacher, but they make him a real Budo master on the mat.

This instructor does not explain the techniques, he stimulates you to get there on your own, he does not want you to be a slave to form, he tries to give you the means to find your own way. Of course it’s more difficult, others explain well what to do, by and large and, let’s face it, that’s also very useful. But this guy wants you to get there at the right time, when you’re ready.

As you can read in Budo, by Werner Lind, a book that I will never stop quoting, this kind of teacher can often give the impression of being personally angry with the students, of deliberately mistreating them. Instead he/she is stimulating them, he/she is provoking them because they have reached a crucial point in the Path, a moment where the challenge with the ego is at a turning point. Whoever really teaches Budo, continuing to quote the usual book, needs to know how the student will react to these obstacles. If the student rejects the attacks as personal, he/she loses sight of the Path. It’s a disappointment for the teacher. Wasn’t it time? Will the obstacle not be overcome? The knot will not be untied and the student will not step forward. He or she may leave, a bad time for the teacher if his/her aim is to make people grow. Perhaps he/she was wrong to consider that student capable of a certain kind of ego work. Maybe it wasn’t the right time to test him/her? Too bad, an opportunity was missed.

I’ve had teachers at school, college and on the mat who made me dream. Dreams are the salt of life. When we stop dreaming we get old and life doesn’t make much sense anymore. I still feel capable of dreaming. I can’t thank my teachers enough. From them I learned to think with my own head, to have joy in sharing what I am passionate about and to always move forward, never give up.
If I can also become a teacher (already done in aikido), I owe it to them; and I will always take something of them with me, inside myself and in my work.