Grado cartridges have been performing very well on my Thorens TD-160. I bought a Signature cartridge used from Marc Morin, the Audiokarma forum’s Grado resident expert, a place where I had got a lot of precious advices from in the past. In 2014, inspired by those advices, I purchased an 8MZ stylus for the Grado Prestige Gold cartridge I was using at the time. I am a true estimator of Grado products for a series of reasons. 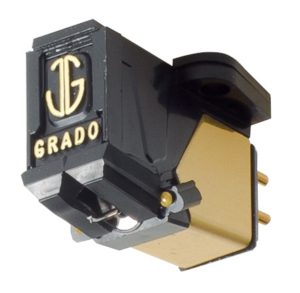 In 2005 I had a Thorens TD-165 and when I though about upgrading the cartridge (I was running a Goldring Elan), I wrote TNT-Audio for advice. The editor Lucio Cadeddu proposed different brands, among which Grado. The most economic section of their catalogue features the Prestige Series, which then only contained the Black, Silver and Gold models, each one being a selection of the preceding model in the series. Higher performer are the Reference and the Statement series. I had to stay within the Prestige series but I allowed myself to get a Gold. Today we have the Prestige 3 series and performances increased greatly since then. Someone says they are closer to the Signature series or even better!

I am very fond of the Grado brand since I had a wonderful Prestige SR-200 headphone. The Grado family makes headphones and cartridges by hand in their labs in Brooklyn since 1953. The company was founded by Joseph Grado (1925-2015), son of an immigrant from Sicily, Italy. He was a good opera singer (at left in the picture) and his ears were legendary. He left school early in order to become a watchmaker (a subject he also taught – he was one of the only two master watchmakers in the US then). This was against what his father dreamed for him and his brothers, to take care of the family company who owned some food stores in Brooklyn. Joe instead had a passion for high fidelity and stereo sound, to which he was introduced by the legendary Saul Marantz himself. Joe started his headphones production in the family home’s kitchen, transforming the food store into the world famous Grado Labs of today.

Joe invented the moving coil cartridges (MC), an alternative technology to the mobile magnet one (MM). Years later he preferred sticking with MM technology but retaining what was good of the MC. He designed the moving iron cartridge (MI), a technology all Grado carts feature today. Their stylii use a transmission line design, a particular configuration of the vibrating mass and the flux-bridger system, all patented by the Grado Labs. Typically, all Grado cartridges have a low inductance while resistance and output voltage stay the same and they are not affected by capacitance at all.

The Gold cartridge is therefore an MM cartridge (or better a mobile iron). Today’s Prestige series features the Black3 and Green3 at the lower end (the latter being a selection of the former); Blue3 and Red3 (same selection mode) are in the middle, sporting a 4-piece cantilever instead of a 2-piece; Silver3 and Gold3 are at the top. But I have read very good reviews even for the Black3 cartridge. Make no mistake: the Prestige 2 series was a great improvement over the previous one. A huge step from the first Prestige of which in 2005 I bought the Gold; at the time, with only 120 euros the performance improved a lot (I learned 14 years later that it had an 8MZ-v stylus installed by mistake!). My digital system was based on a Cambridge Audio CD-6 and the Thorens TD-165 with the Grado Gold gave it a run for its money. Today I am using a good Cambridge Audio D500SE as transport hooked to the Project Dac and the Thorens TD-160 outperforms it, no matter the cartridge I mount on it.

In 2010 I replaced the damaged stylus with a Gold1 (of course, I had no idea the one I damaged was an 8MZ!); therefore, a few years later I actually learned about how an 8MZ stylus, designed as replacement for the Signature 8 series, dramatically improves the performances also of Prestige bodies. I purchased one achieving a great sound improvement (actually bringing the cartridge back to how it was when I first bought it). That improvements made me wish to try a Signature body with it, so I bought the 8MX Joe Grado Signature cartridge from Marc Morin. After I successfully damaged even the new 8MZ stylus and having unsuccessfully attempted to have it repaired, I decided to revive my glorious Gold0 with a gamble: I purchased a Black2 stylus in the hope it enhanced the Gold0 performance almost up to Prestige 2 levels (almost). I’ve read reviews about how it is hard to tell the difference between a Grado Black2 and a Gold2. So I decided it was not worth spending the money for a Gold2 replacement stylus this time. I went for the smaller one, but as of today I’m still very proud of my old Gold…

Joseph Grado sold the company to the son of his brother, John, who’s running it today. They still craft headphones and cartridges by hand. When the Compact Disc hit the market, uncle Joe’s company suffered a lot but they stayed the same. Today’s Grado Labs are fairing very good with John at the helm and his son Jonathan learning the job, taking care the modern web marketing. The nice thing about John is that he doesn’t care about continuous growth and income. They could go on the stock market and grow, he could earn much more and be rich. No, he is fine with what he has, which is still a lot, so he can enjoy living and spend time with his own family, the most important thing of all. Maybe it is their Italian origins, but I really like those aspects…