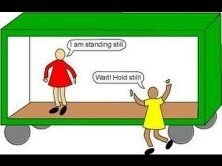 I have very fond memories about my high school maths and physics teacher. He is the one responsible for my love for science and the first who tried to teach me how to use my own brain and think freely. 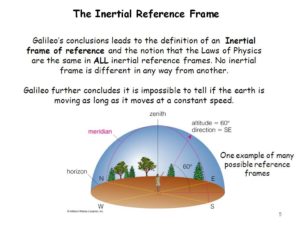 Ok, practically, the Earth and the planets revolve around the Sun, but it actually means around a point that is really close to the center of the Sun. But when we do calculations for satellites and spaceships we need to take into account the fact that the orbits are not centered in the middle of the bigger planet. It is important. It matters. The Moon and the Earth form a system and they also revolve around a point that is very close the the Earth’s center. Two stars of similar mass in a binary system revolve around the center of gravity of the binary system, which is roughly at half their mutual distance.
Today one of the most debated science topic is the Global Warming. Scientific data at our disposal prove that the Earth is indeed going through a warmer period. As a geologist, I studied that Earth’s climate changes during its billion years of history are affected by a lot of factors, that can be astronomical and geological, among others. That complex interaction of factors is the reason why glacial and interglacial periods have been alternating (in geology a glacial period is when the polar zones have ice caps).
The last few years of Earth history we call Holocene have witnessed far bigger climate changes than the one we are fearing now – look at this graph:

The big blue blob at the left is the end of the last ice age around 10000 years ago. Then Earth’s average temperature has been fluctuating around the 15° reference point. There are 5 major warmer periods before the one we are living in, which appears to be the smaller (Modern Warm Period).
The graph clearly shows that during human history the warm periods coincided with human development periods like the Iron Age, the Bronze Age, the Roman Empire, the Maya culture and our modern technological society: that’s why they are called “Optima” – they have been characterized by noticeably higher temperatures and higher sea levels than those of the current global warming. Think of it: some warmer periods of the past have been warmer and longer than today and humans were not even using our modern, polluting comforts at those times.
The modern warm period we are living in is real. Temperatures are rising but looking at the graph, observing from an inertial frame of reference, we cannot say if the warming will continue or it is about to end (as pictured in this graph) to a transition towards an ice age (of course not in one human generation time).
We might well be at the top of a current Optimum (whose warmer temperatures are scaring us) that is actually going to recede towards a so called “processional cross” (the beginning of a mini ice age).
From a different point of view, the frame of reference of geological time, human life is less than a blink of an eye. Data show that during Holocene, Earth’s temperatures have been generally decreasing (the decrease in geological time is clear, but it was actually made of several highs and low); those who were living during the highs – like us today – actually experienced global warmings and were forced to adapt to them: 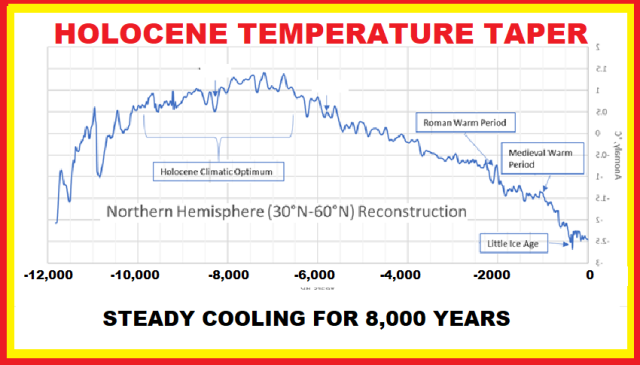 Therefore, no climate change denial here, nor human contribution denial. Climate change is normal during Earth’s history, much like earthquakes and volcanic eruptions: we have to cope with them. Whether the current warmer period is caused – or just contributed by the humans, should not be our primary concern (though it should still remain a concern). The latest abrupt temperature rise coincides with the onset of the industrial revolution, a time when we began burning fossil fuels for energy and heating. But from the more inertial frame of reference of the Modern Warm Period, it is almost invisible: it dissolves in the general temperature “high” shown in the graph. Certainly it is a problem: cars and heating systems emissions do pollute the air of our cities and contribute greenhouse gases to the atmosphere. Completely electrical car engines and renewable energy would remove city air pollution but the process of producing electric cars has the same global impact than producing a conventional one.
The thing is that the Earth will probably keep on warming for its own reasons for the next human generations, not matter what we do. We may be unable to stop it. Like the humans that preceded us – those who have been living during the Climate Optima – were forced to adapt, they migrated to cooler areas, they abandoned cities and built new ones. Of course it is not easy and maybe it is even less so for our modern societies. But we should invest in adapting to rising temperatures and sea levels rather than uselessly trying to stop them from rising.