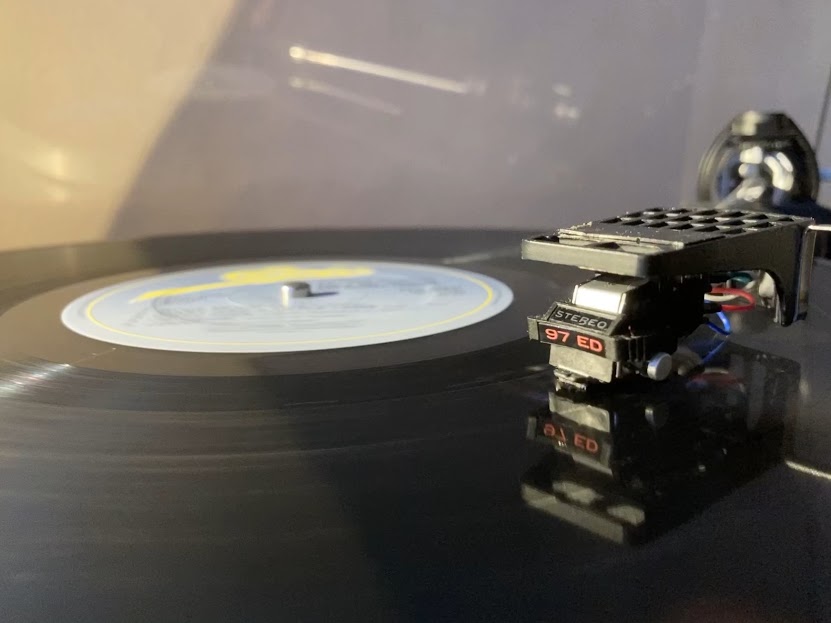 I’ve spent some money in the past on turntable cartridges and styli. It’s nothing exaggerated, it’s not a typical feature of mine, I’m not a serial collector and I don’t buy things just for the sake of it; I only do it if I need something. So I spent what today would be about 200e for the first serious cartridge I had, a Grado Prestige Gold first series. To replace the stylus years later I spent I think a hundred euros. Then I read about the performance of the 8MZ replacement stylus and spent 150 Euros between cost and shipping. So I wanted to try a Signature Series body and found a used 8MX for 100 euros. Recently I wanted to try a Grado Prestige Black 2 stylus on the Gold 0 body. About $50. As you can see, nothing transcendental or impossible.

Long afterwards, through an American friend of mine, I had the chance to buy an Audio-Technica AT95e cartridge for only $60, including a very good HE (hyper elliptical diamond) replacement stylus, of a much higher value (about $100 additional). Now, again thanks to this friendship, I am waiting for a very good Grado 8MZ stylus with nude diamond for only $100.

Summing up, to keep each cartridge operational I spent:

Before I bought the AT, I came across a very cheap turntable that some people were about to throw out while cleaning out a basement. They asked me if I wanted it. I tried to see if I could fix it but it wasn’t worth it. The cartridge was worth saving, despite the broken stylus: Shure Me97HE Encore.

Years earlier I had had a Shure on my hands for a short time and the experience was a bit disappointing. Influenced by an exciting review in my favorite online magazine of a Shure V-15 V, I wanted to try one and found only an affordable V-15 III LM, a “lightened” version of the regular V-15 III for Dual turntables. If I remember correctly, it cost me about 80 Euros. As I’d read in the review, Ed Saunders was producing some very good replacement styli for Shure at the time. I bought one, I don’t remember how much it cost me, about $20 or $25 maybe, and I think my wife dropped it when she opened the box (she was curious). Perhaps that was the reason why the cartridge sounded too cold, with unbearable sibilants. Nothing that came close to Gold0/8MZ! So I put it back on sale, lost a few tens in the process but I eventually bought the amazing Grado 8MZ replacement. And with this – i thought then – the Shure chapter was over for me.

So, at first, I thought about selling the Me97HE as well, but I couldn’t do it for 80-90 Euros (about what it’s worth today) nor for 40-50. At the time I didn’t know much about it and the plastic cartridge stayed in the drawer for months if not years. 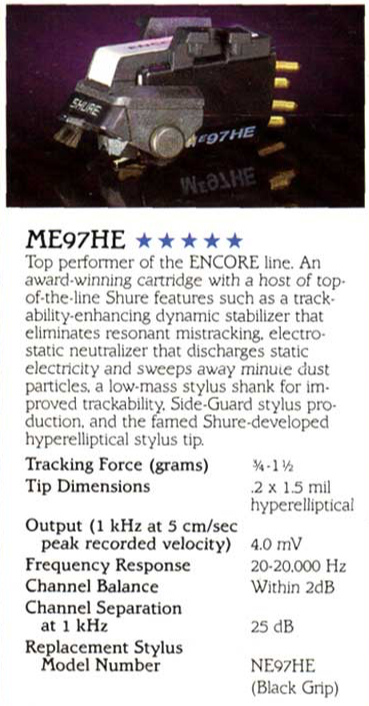 Then I started looking for information and discovered that it was a reissue of the top-of-the-range Shures of the 70-80s, if you exclude the V15 (from which it differs very little in performance). The Encore series were supposed to have the same internal electronics but a lighter body. It was not supposed to be confused with Shure’s latest cartridge, the M97xE – cartridges with an ‘x’ in the name mark a variation from laminated poles to normal poles that Shure made to get a warmer sound (a roll-off at high frequencies) as some criticized the coldness of their cartridges. Well, I would disagree because the previous Shures, both M and V15 series, were advertised as having an extremely flat response across the range and were also used by record manufacturers to evaluate the first copy of a vinyl.

However, one member of the aforementioned forums has moved on to measurements and found that the values of the Me97HE are fully compatible with those of the M97xE while deviating from the original M97HE, which in his opinion sounds at other levels. So the M97xE would be the reissue of the original M97. Both the Me97HE and the M97xE, being virtually identical on the inside, would have the high frequency roll-off. Not a good advertisement by Shure. The fact is that after a few years Shure stopped making cartridges altogether.

Anyway, I did have a free little monster on my hands, a sort of ugly duckling, a treasure hidden in a broken and worthless turntable that I probably had to give a chance to. I was looking for a stylus; it was supposed to be hyper elliptical 0.2×1.5 mm (from the HE suffix) but unfortunately prices were no joke and for me it was a time when I couldn’t spend too much. The M97, like its Me97 replica, was also offered with 0.2×0.7mm elliptical stylus ( ED suffix), the cartridge body was identical. I came across an advertisement for a low-mileage Nagaoka N97 ED replacement for only 28 euros including shipping! OK, I would have had a stylus with an elliptical tip instead of a hyper elliptical one, but for that figure I could at least try if the cartridge still worked. Worse case scenario, I would have lost a ridiculous amount of money. 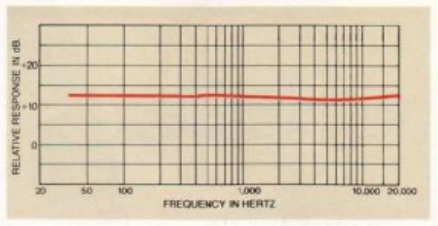 The flat response of the Shure M97HE from a Shure brochure

I remember it well: while I was mounting the Shure on my Thorens TD-160, one of the cables slipped off the connection and the first time I listened I could only hear one channel. Immediately I thought “well, it doesn’t work…”, but at the same time I was surprised by the sound quality of only one channel! I ran to check the contacts and was relieved to notice a disconnected lead. I put it back in place, and listened to it. I was amazed! I couldn’t believe it! The sound was so realistic, open and deep at the same time. I had recently resumed playing guitar in a rock band and I had become familiar with the real sound of the instruments. Despite my great admiration for the Grado cartridges, perhaps the realistic Shure sound was impressing me particularly for this reason. 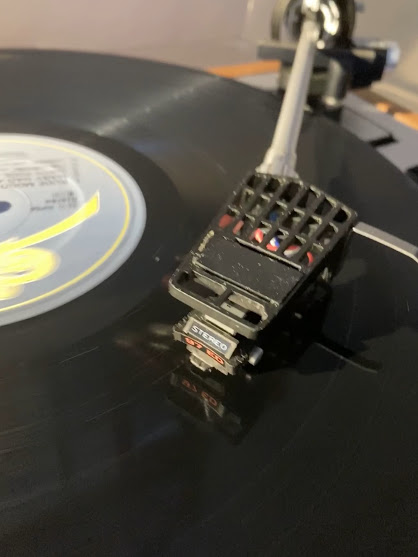 At the moment of writing, I still don’t have the new 8MZ stylus that I will mount on the Signature 8MX. I expect great things actually. But when I think I’ve only spent 28 euros on the Shure Me97 so far, I can’t believe the sound that comes out of it! At the moment it is the best cartridge I have, as the 8MX runs with a damaged 8MZ stylus and has lost bass and overall output level (and acquired some problems with sibilance).

The AT95HE has impressive detail, enormous clarity and cleanliness, but as many say, the AT’s are famous for the prominent high end and I prefer something more balanced, as I have transmission line speakers and like to feel the bass just as deep (when there is one). So I still prefer the Shure even though it has a lesser stylus than intended.

I got the AT95HE at a friend’s price, incredibly cheap, and it has to be said that it is not the latest Audio-Technica’s development: the AT series has been upgraded to ATV recently, greatly improving its performance compared to the AT95 which was definitely the best deal you could make until recently: a very good performing cartridge for its price of about 40 euro new! Today’s ATV95e costs around 50 Euros and is the best at that price without any doubt. Like the old series, it can be upgraded to higher models by changing the stylus. They tell me that without getting to the HE stylus, already an ATV95ML is something exceptional for less than 150 euros! The fact remains that you have to like the treble in the foreground or use it to balance a dark sounding system…

The Shure Me97ED (which I will have to try to restore an Me97HE as soon as possible) is the one I am most satisfied with at the moment. I can’t imagine what it can do with the appropriate hyper elliptical stylus. It would actually be a infamous M97x inside, okay, but it doesn’t look poor in high frequencies. Maybe I don’t realize it. And it also has to be said that mounting N97 styli on Encore bodies is not ideal because of a plastic band with the Shure writing on it that would prevent you from putting them all the way in. It didn’t seem like a problem to me and maybe I don’t realize that either. Anyway, I got a deal:

Probably the best deal I’ve ever made in audio. Of course, this might push me to buy a Jico hyper elliptical replacement stylus for well over 100 euros or an original used Shure to have retipped when worn out. I could also sell the Me97HE body at a good price and buy an original M97HE just for the fun of it. But at that point, if the opportunity arises, I could take a shot with a nice V-15HE IV! Or even MR IV! Appetite, it’s true, comes with eating, but for now if I could just find a HE replacement for my Me97 I would have a sound that some say is very close to the V-15HE IV already. That might be enough for me, as even with the elliptical diamond the Shure leaves me with no words…

But more importantly: although it is supposed to be the M97xE progenitor rather than the M97HE reissue, who ever thought of putting a cartridge of such performance on a pretty much toy turntable?