It is widespread opinion that the original rubber mats aren’t any good. Some purists of the original turntable state believe that if the mat is in good condition it shouldn’t be replaced. In the past I had replaced the original rubber mat with a very thin antistatic felt mat. Felt is appreciated for its ability to avoid the record to be electrostatically charged during the playback’s “rubbing”. But it is really thin and it can be a problem in Thorens turntables for setting the right tonearm height.

Later, I purchased the very good Funk Firm Achromat from England, after an enthusiastic review by Geoff Husband of TNT-Audio. The stuff it is made of is a kind of foamed acrylic/vinyl compound (similar to PVC, therefore similar to vinyl), and it is used for high-end platters. The idea is distributing the natural vibrations of a record in a larger volume (record + mat). Having replaced the felt mat with the Achromat I obtained a clear further sound improvement in both bass extension and general detail. Being 5 mm thick, the Achromat raised the height of the record so I had to adjust the tonearm height again, but this time from a better starting point (the felt mat was actually too thin).

I also added a 300 g graphite clamp to hold the disk tight and dampened during playback. It is usually a good idea since clamps improve the contact between record and platter (mat). One should pay attention at the clamp’s weight: Thorens turntables, like all suspended tables, require a re-adjustment of the suspension in order to reset the correct platter height following the added weight. After having purchased the Achromat I stopped using the clamp. 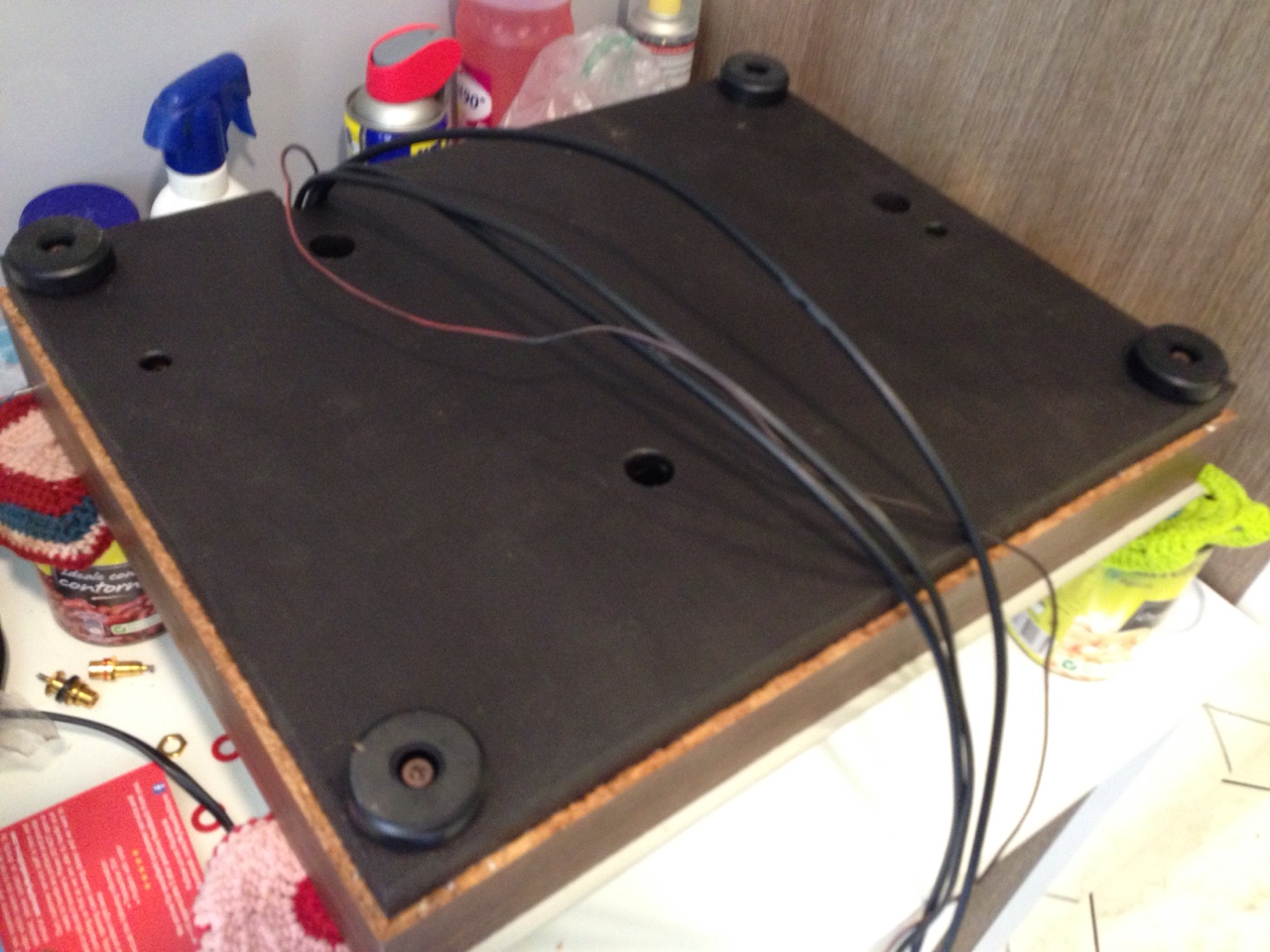 The original small rubber feet are also to be replaced. Some purists prefer to avoid that. Some also get rid of the flimsy wooded bottom board. Some leave the plinth open, like I did for years: very comfortable for further suspension adjustments. Then I followed some others’ example and I bought a 18 mm thick MDF board. I drilled three 2-cm holes under the suspension springs and another one on the back edge to let the cables out. Then I painted the board with black acrylic paint, in the attempt to further dampen it. For the same reason, I glued some tar sheet patches in the board’s inner face. Not a back look in the end. it is similar to what Thorens itself did for their TD-160 Super.

For years I had replaced the original small feet with larger rubber door blocks, easily found in any hardware store (see picture at top right).Then I thought that larger plastic feetwith rubber base could give the Thorens a better HiFi look. I bough a few and dampened them by filling them with the same “white tac” I’m using inside the plinth. I screwed them to the plinth at almost the same place where the original ones were.

The quality of reproduction was improved again and my digital player Oppo DV-980H trailed already. Actually, the Oppo 980H’s performance is way below and I find more and more pleasure in listening to vinyl records instead of CDs. And the old Thorens still has room for improvement, such as replacing the tonearm inner cables or the whole tonearm itself.