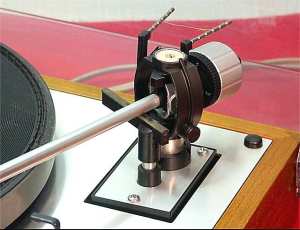 Now we have to make sure the cartridge’s vertical tracking force (VTF) is the correct one as suggested by the manufacturer. In order to do this, we have to lower the cueing bar and keep the tonearm between our fingers (out of the record’s surface!) while moving the counterweight back and forth (the TP-11’s in the picture at left must be rotated clockwise and counterclockwise) until the tonearm, headshell and cartridge in place, is perfectly horizontal, balanced between the cartridge’s mass and the counterweight. With the TP-11, at this point you can move the VTF indicator to zero and rotate the counterweight to the desired value. It is strongly advisable to purchase a digital or analogue VTF meter so that you can check the value with a much higher precision.

The antiskating bias is a mechanism meant to counterbalance the centripetal force that drags the tonearm towards the record’s center during the reading. The groove’s inner wall (the one towards the center of the record) contain the left channel modulation, therefore this should result more “highlighted” if there was no or too little antiskating force (generally, you should notice a duller right channel and some distortion of the higher frequencies, especially on the sibilants in the same channel). With time, this could bring to an earlier wear of one groove’s wall and of the stylus tip. By applying a proper counter-force (centrifugal), even the external groove’s wall, the right channel, will be correctly highlighted. With a properly balanced pressure on both the groove’s walls, the stylus tip will wear more slowly and the groove will almost not wear at all, provided it is well cleaned.

The TP-11 tonearm installed on Thorens TD-165/166 models has a little weight at the end of a thin nylon thread; it hangs from two horizontal rods with 6 grooves each (picture at right): The nylon thread must be positioned on different grooves depending on the VTF in use. For example, in the common case of VTF=1.5 g, the Thorens manual suggests the number 1 grooves (the minimum antiskating value). 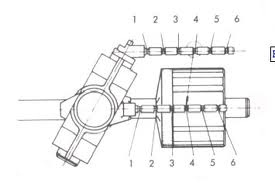 The Thorens TD-160’s TP-16 tonearm allows for a dynamical VTF setting. Once the tonearm is set to zero VTF by moving the counterweight back and forth until the arm is horizontal, you can move the indicator to the desired value: a spring system will load the cartridge correctly. When playing a warped disc, the systems varies the VTF dynamically while the cartridges follows the ups and downs of the record. In the back of the tonearm there is an additional knob for fine tuning with a VTF meter or gauge.

The TP-16’s antiskating system is based on a magnetic mechanisms: one magnet is fixed and the other one’s position can be adjusted by rotating the relevant knob (picture at left); this provides the desired counterforce to the centripetal force the tonearm is subject to. The readings scale is rather cryptic, though… 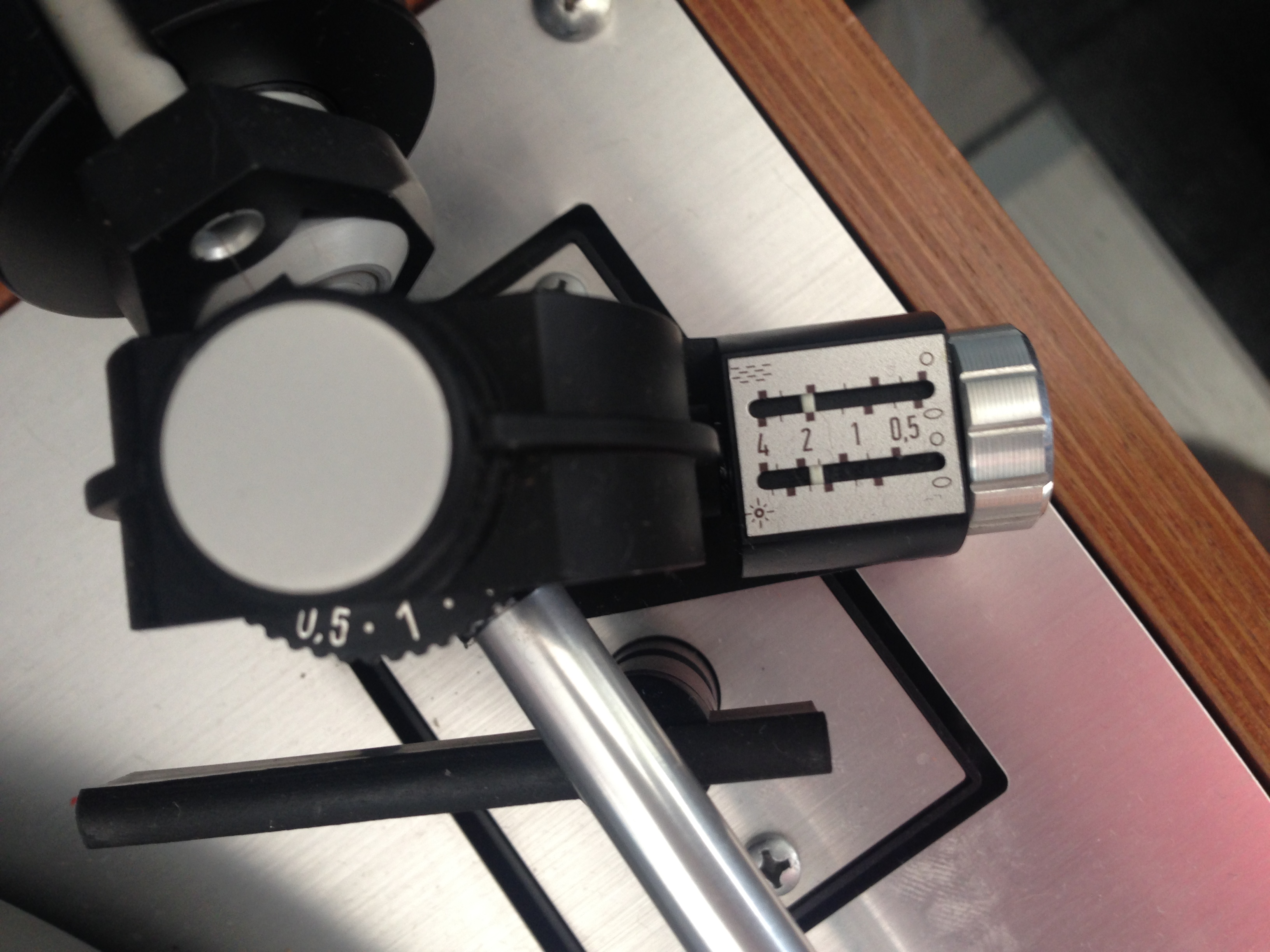 Some believe antiskating is not strictly necessary: it would be enough to slightly increase the VTF and that’d be it. I feel it is better to apply a centrifugal force to the tonearm in order to balance the centripetal attraction on the cartridge. Lately, I used the HiFi News Test Record to check the antiskating settings I did in both the Thorens TD-165 and the TD-160. Some test tracks contain signals that should be reproduced with no distortion on both channels; in both turntables the right channel showed too much distortion and the left channel was more evidenced – clue of too little antiskating bias. Between two of the test tracks, in the middle of the record, there is a long space that has not been carved (silence). It is very useful to verify the efficiency of the applied antiskating bias. In both decks, when cueing the stylus down in the middle of the silent space between tracks, it would rather rapidly slide towards the center – a further clue of too little antiskating. On the TP-11 of my former TD-165 I had to move the threaded weight to the second position in order for the stylus to stay in the center of the silent space between two tracks. In the TD-160 I rotated the knob back and forth until I found a position that would obtain the correct balancing, again by setting a higher antiskating bias than that calculated from the VTF in use.