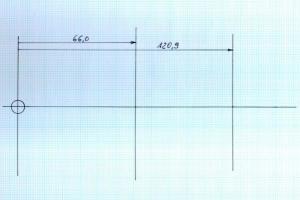 Especially after having performed all those adjustments, it is a good idea to check the cartridge’s alignment. During reproduction, the needle slides along the spiral groove from the outermost to the innermost position. It is impossible the cartridge will be constantly aligned all along the way. Theoretical calculations by Baerwald, Stevenson and Lofgren have pinpointed the closest and farthest points from the record’s center where the cartridge must have the best possible alignment (so that the average error between them can be tolerated).

The null points are at 66.0 e 120.9 mm from the record’s center (Baerwald). They can be projected on dedicated graphs to be printed and placed on the platter to verify the alignment, such as TNT-Audio’s proctractor (many complicated protractors are available for sale but you could also draw the null points on graph paper). Thorens turntables like mine, which have a spindle to pivot distance of 215.6 mm, could use a specific protractor available on the Vinylengine website. Just center the protractor graph on the record’s bearing shaft and verify the needle follows the arc on the protractor; at the same time, the cartridge’s sides must be parallel to the lines drawn on the checking point. If it is not so, the cartridge mounting screws have to be slightly loosened so that you can move the cartridge back and forth and twist it sideways to reach the correct alignment. The cartridge’s lateral tilt (azimuth) is also very important: an incorrect azimuth may cause a wrong needle-groove contact, tighter on one side, lighter on the other. This could lead to an earlier wear of both needle and record. Azimuth can be evaluated by placing a small mirror on the platter with the needle on it. The reflected image helps in determining if the cartridge’s sides are vertical or not (picture at left, from theanalogdept.com). The point is the TP60 headshell, typical of Thorens tonearms, does not allow for such an adjustment. A trick is inserting a narrow spacer that would allow tilting the cart laterally by tightening the mounting screws by different amounts.