My first digital player was a Philips CD-16 (right) I bought in the second half of the 80s. A renown HiFi shop in Rome sold it to me as a bitstream (or 1-bit) player, the new Philips technology for D/A conversion sections known for giving low price players an unusually good sound for the times. As I found out on the minute I arrived home, it was an ordinary 16-bit CD player, as it was made clear by its very name. I decided to keep it all the same since I thought Philips had invented the CD whose standard is based on 16-bit sampled sound. I also happened to like the sound thanks to the fact I had no turntable at the time (my first one was out of tune since I didn’t know much about adjustments then). Furthermore, I had been playing a cassette deck for years, no wonder I found the CD sound quality superior…

A few years later, browsing through HiFi magazines, I was struck by the review of the JVC ZL-Z431 (at left), a CD player that really used bitstream technology. The price was extremely inviting, a bit less than 200 thousand Lire, and the performance promised to embarrass the competitors. I sold the Philips CD and bought the JVC along with an Onlyo A-8200 integrated amplifier (in a different shop, obviously). When eventually I upgraded my system with the TDL loudspeakers and the Unison Research amp, the JVC player, though good, was not worth the rest of the system. I had just graduated, I had no job, I dreamed about players such as the Meridian 506 CD but I certainly could not afford it at around 1 million Lire. I resigned myself to look for unsold stock models that had just gone out of production and were sold at lower prices. 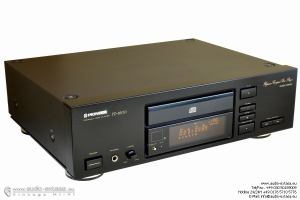 I stumbled upon a Pioneer CD player from the Reference series, the PD-8500; nothing special but with good reading mechanics, heavy weight, honeycomb base structure, dampened CD tray and the acclaimed Burr-Brown 24-bit converters (other than 1-bit! A few years later, multibit converters proved superior to bitstream, at least in some cases). I shelled out 230 thousand Lire and from January 1993 my digital source was still the weak link of my system, but at least it was a more dignified one. Finally I was able to listen to some things my beloved loudspeakers were capable of! 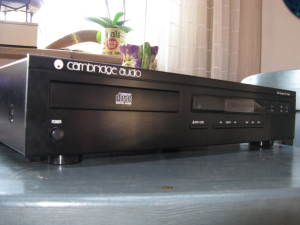 I few years after, in 2001, I exchanged the Pioneer for a used Cambridge Audio CD-6 (in the same shop where I bought my first CD from Philips): it featured a very good reading section and a warm sound. I found some irony in the fact it used bitstream converters. Its successors would have adopted Burr-Brown 24 bit converters but I had listened to the CD-6 in comparison to a brand new Marantz and I liked the Cambridge more. It used three separate power supplies for the digital, analogue and optical sections. It also had balanced XLR outputs (which I’ve never used). I fell in love with Cambridge Audio players during a 1-month trip to Leeds, UK. Once back, I searched for a used one and I found it in the aforementioned shop for €600 (€200 plus my old Pioneer – a good treat for the trick they played on me years before!). The wonderful player was top of the line in Cambridge Audio’s offer of the time. It would cost 1 million Lire when it came out (1996). Finally my system was balanced and I did fulfill many of my goals. Still, it was technology from the 90s and time matters a lot in digital technology.

Modern cheap models sound decidedly better than those from 10 years ago, let alone those from 15 years ago! Since my old DVD player was nearing the end of its days, I started to think about something I would have flinched at a few years before: using a DVD player for both music and films! Since recently, an American firm manufacturing in China, the Oppo Digital, was on everybody’s lips for the exceptional video quality of their non expensive multiplayers. The amazing performance was due to extremely good digital processors that were once very expensive external components. The latest models were able to interpolate the lines of a standard DVD video in order to upscale it to HD specifications. This is not real Blue-Ray HD but one of those Oppos can really bring a DVD to its maximum. For what I care about video it would really be it. What I’m really concerned of is audio. After a while, someone realized those unassuming players, so much acclaimed in the Home Theater community, so versatile in playing any kind of disc format, CD included, could also sound damn good. Reality is a €150 DVD player can’t completely outperform a proper €1000-2000 CD player. 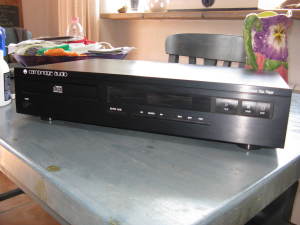 But in high fidelity we’re talking about shades, especially when digital players are concerned. A big digital player’s detail and freshness can mean nothing to many, who would never spend hundreds, let alone thousands of euros for mere shades. Years before I had the chance to evaluate Linn’s first CD player for a week in my home. It was big news since the Scottish brand was famous for their turntables. They refused to convert to digital for years. In order to keep the Linn CD I would have had to spend 5 million Lire! I compared it to my Pioneer PD-8500 Reference. It was clear it sounded better, you can bet on it, but the shades I was able to detect were not worth the price difference: 230 thousand vs. 5 million Lire! It is also plain that my system, although a very good one, was only worth about 1/5 per component with respect to the Linn. Therefore, I was not able to perceive what the Scottish player was really able to offer. I wouldn’t even spend 1 million to listen to those hues. Today, as Linn went back to make just turntables, the Oppo multiplayers offer a high quality sound at really inexpensive prices. They perform with dignity when compared to the giants and at that price they completely erase any competitor (even something more). They can also play any kind of digital disc, the most recent models even Blue-Ray (but the price is higher). In 2010, I found my Oppo DV-980H used on eBay for €150. It was

in very good conditions, it played very well, at least as good as if not better than my old Cambridge, which I had sold for €60 to an “old CD players” geek. For what concerns audio specs, it features 24-bit, 192 KHz D/A converters and can play SACD, HDCD and DVD Audio (unborn formats I will never use). A very good bargain, the more so since it replaces both my old CD and DVD players. For the movies, the quality is unbelievable, well over its category, thanks to a Mediatek video processor allowing the 980H to interpolate the lines of a DVD up to the 1080 lines of High Definition video (it brings normal DVDs to Full-HD, but cannot play Blue-Ray discs). By inserting a simple code I was able to make the 980H read DVDs from any regions of the world. One more gadget is the front USB input for viewing photos and playing videos in DivX, upscaled to the best format they can be played at. Unfortunately this Oppo is not much useful for liquid music, since it can only play compressed formats from its USB input. In my current situation I couldn’t ask for more. I could be dreaming of Unison Research, Meridian, Rega, Audio Analogue, Naim, but what about the money? Would it be worth it? Not now. I’m good…

A real quality upgrade would certainly be the new Oppo BDP-105. Modern multiplayers, besides reading Blue-Ray discs, can also play PCM and FLAC files from the USB port; they could be a very likely candidate as my next digital source. Often they also offer digital inputs, very useful if you wanted to use your computer or other sources for digital audio playback.

Cambridge Audio often “inspire” their own multiplayers to Oppo, like the Azur 650BD, a very valid alternative in the used market and also a step back to the past for me who have happily owned a Cambridge Audio player before.

The next model had been the Azur 751BD, today renewed as 752BD (above),; tested at TNT-Audio, the 752BD performance was almost impossible to distinguish from the OPPO BDP-105’s (which in turn was really close to the exceptional Astin Trew’s sound quality!). 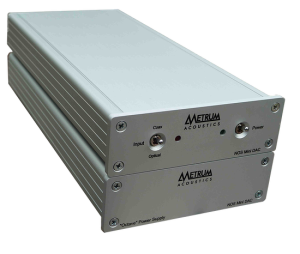 At the end of the day, modern universal audio network multiplayers like these should be the most reasonable choice. From a certain point of view, the smartest thing to do should be the high-resolution ripping of the whole digital and analog discography onto a big hard disc to be connected to a good multiplayer or D/A converter (such as the Metrum Acoustics DAC Quad, at right), that could even connect my Macbook by a toslink optical cable. The occasional CD playback could be assigned to a simple and cheap Blue-Ray player, also to be connected to the high-quality DAC.

Sure, I still dream about a proper upper-level CD player among those from Unison Research, Astin Trew, Meridian, Audio Analogue, Rega or Naim (at left, the excellent CD 5i). I’m not sure I would feel safe with all my music stored in a hard disc: I would always be worried about a technical failure, about the idea of losing everything in a blink of the eye. I like the physical media (I love vinyl!) although I’m tickled by the idea of a “liquid” format superior to the CD format, that seems to be reaching its end. They used to say the same about vinyl records (and film photography), so I don’t find anything strange in continuing to use CDs and upgrade the player with a top level one. I could prefer made in Italy players, for instance the Unison Research Unico CD Primo. It has been vastly reviewed with enthusiasm, it features a valve state output and a “vinlyl-like” sound. Some can be used as DAC through a digital coaxial input, some (more expensive ones) have a USB port. I could then experiment with liquid music, although I heard some claiming that sound quality is not really affected much by the density of digital information. High-rank CD players don’t seem to make you desperately wish for a HD format. 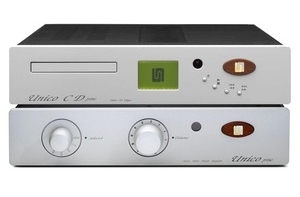 Although I’ve never really loved the CD format, today I wouldn’t mind keeping on swapping discs rather than organizing playlists on the computer. In summary, choosing a CD player from the same maker of my current amp would somehow keep a certain synergy, especially if one day I’ll opt for a new amplifier from the same Italian manufacturer within the Unico series like in the picture at the side.