In structural geology, the analysis of rock deformation in the field or at the microscope (strain analysis) allows us making some assumptions on what kind of stresses had caused those deformations (stress analysis).

These are the 4 components of the plane stress (a particular case in which no stress is acting along the z direction, perpendicularly to the xy plane)

The stress upon a plane oriented by an angle θ with respect to the y axis is represented as in the picture at right. At a certain value of the θ angle, σ will reach its maximum value.

In three-dimensional stress, the homogeneous stress can always be analyzed in terms of 3 principal stresses perpendicular to each other σ1 ≥ σ2 ≥ σ3, called main, intermediate, and minor principal stress, respectively.

Calculating the stress on a surface whose normal is at a angle θ from the principal main stress σ1 can be performed on a diagram where σ is the x axis and τ the y axis. All the σ – τ pairs resulting on the different planes while varying the angle θ from 0 to 360° are lying on the so called Mohr’s circle. 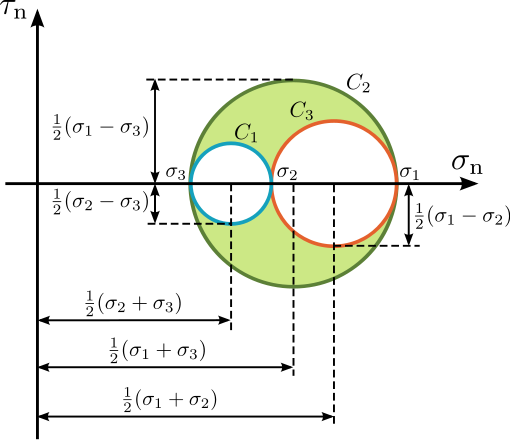 Maximum and minimum values of the shear stress are always on two planes at the same angle (θ ± 45°) from the main principal stress.

Higher values of shear stress are due to stress differences, not to absolute values of the principal stress. 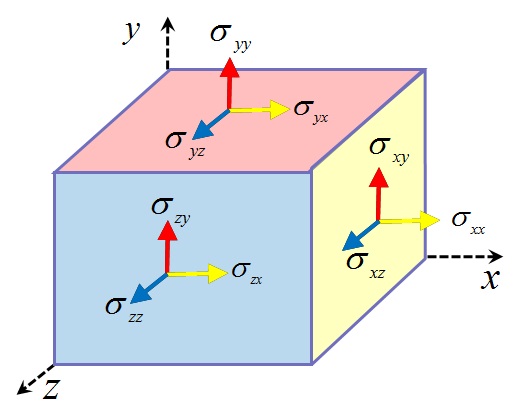 In 3 dimensions, this occurs on two conjugate surfaces which intersect along the intermediate stress axis σ2 at angles of ± 45° from σ1 and σ3.

In different situations from the plane stress, we will have stress components along the z axis. In total, they are the 9 components of the stress tensor, 3 of which are normal to the Cartesian planes: σxx, σyy and σzz.

On planes where the shear stress is zero (τ = 0) they become the principal stress planes σ1, σ2 and σ3.

There are 3 perpendicular planes upon which no shear stress acts upon. The same goes for deformation, where we talk about principal strain axes.