We have seen how a basalt is composed by nearly 50% labradoritic Plagioclase and 50% monocline Pyroxene. Sometimes we may find some Olivine and rhombic Pyroxene. Some elements present in magmas can concentrate in the melt during rock formation and fractioned crystallization. They have difficulty in entering the cation spaces in the crystal lattices of the solid phase. The reason can be their mere size or their electronic charge (ionic valence) that are too high for them to be compatible for rock formation. Incompatible elements by ionic radius are potassium, rubidium, cesium, strontium and barium. They are known as Large-Ion Lithofile Elements (LILE) and therefore they are rarely found in lithospheric rocks. Incompatible elements by ionic valence are zirconium, niobium, hafnium, thorium, uranium e tantalum, and also some rare earth elements (REE); they are called HFSE or High Field Strength Elements.

The two most important basalt families are called “tholeitic” and “alkaline” basalts. A rarer family are the high-alumina basalts, of intermediate composition and over 17% in Al2O3. Tholeitic basalts are oversaturated while alkaline basalts are undersaturated, therefore they contain Olivine and Nepheline (no quartz occurrence). Ryolitic magmas can derive from tholeitic basalt; from alkaline basalts we can go as far as phonolites. Among tholeitic basalts are those typical of mid-ocean ridges (MORB), characteristically low in incompatible elements. Other typical basalts are those erupted from ocean islands (OIB) away from plate margins, therefore usually associated to time-progressive volcanic chains (intraplate volcanism). Many believe this nomenclature to be confusing, since many mid-ocean ridge basalts, as well as ocean island basalts, show varying characteristics.

The various igneous rocks compositions can be represented on a 4 element diagram, a diamond-shaped graph called Streckeisen’s Diagram. At the top we have Quartz (Q); at left the alkalis (A) like sodium, potassium and K-Feldspar (hence the Albite Plagioclase, too); the anorthitic Plagioclase is at right (P); at the lower vertex are the Feldspathoids (F), undersaturated minerals such as Nepheline and Leucite. There is a different diagram for effusive rocks and one for intrusive rocks. For example, at the top vertex we have 100% quartz and 0% Feldspars; at midway between quartz’s vertex and the top triangle baseline we will have a rock containing 50% quartz and 50% Feldspar, and so on. The triangle’s baseline, the segment A — P, is the silica saturation line: above it, in oversaturation regime, the first quartz crystals appear, more and more numerous as we approach the Q vertex; below we are in undersaturation regime, so we have no quartz enough to form Albite, Orthoclase (K-Feldspar) and Anorthite crystals only – also Leucite, Kalsilite, Nephelina, Melilite, and even Olivine will appear, more and more so as we approach the lower vertex F. 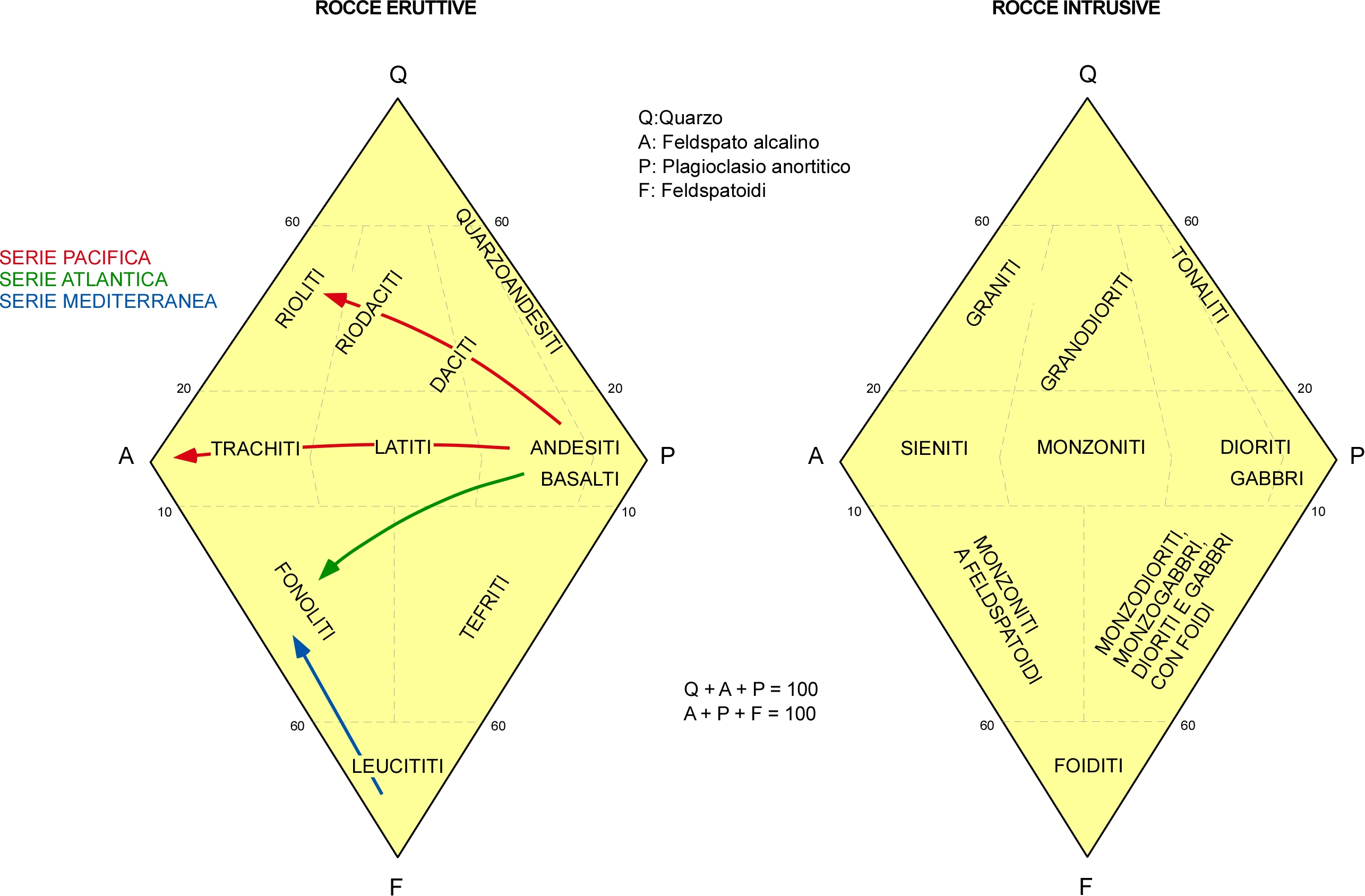 You see how basalts and their intrusive counterparts (the gabbroes) are right on that baseline, closer to the anorthitic Plagioclase side, which is present at 50% as Labradorite. Basalts lie across the saturation line because tholeitic basalts may contain quartz, while olivinic basalts are lacking it. Andesites (and their intrusive counterparts diorites) are richer in Feldspars and their Plagioclase is more sodic (it’s Andesine, as the name suggests). The same reasoning can be extended further to latites/monzonites, down to trachytes/syenites.

As seen on the QAPF diagram, a granite is just a quartz-rich syenite; a granodiorite (corresponding to the average continental crust composition) is the middle way between andesite and granite, with the same quartz percentage but a less alkaline and more calcic Feldspar composition. 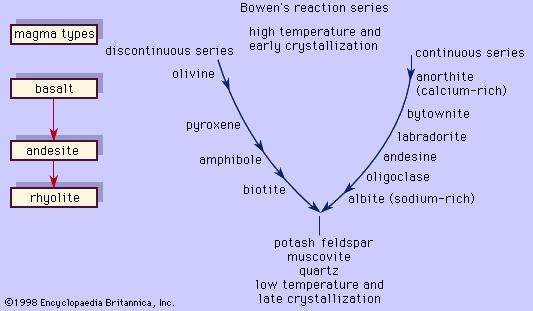 During fractioned crystallization, as the magma is cooling, the minerals with the highest melting temperature crystallize earlier and separate from the melt leaving a magma with a changed composition: the minerals that crystallize earlier are the undersaturated ones like Olivine, Pyroxene and calcic Plagioclase. Everything is clearly described by the graph at right, known as Bowen’s Series: On the left side are the ferromagnesian minerals, among which Olivine and Pyroxene that crystallize early; then it’s up to Amphiboles and Biotite; at the same time, the Plagioclase series crystallizes from the calcic to the sodic units; at the bottom are the minerals that crystallize later: Orthoclase, Muscovite and quartz in the same order. The cooling magma loses its high melting temperature components becoming more and more silica-rich. The first step is a magma of andesitic/dioritic type. A ryolitic melt has typically 20-40% more quartz of a basalt. To reach that composition a basalt must be fractioned up to 20-30 times. But during fractioning not all basalts become ryolites: if silica is not enough we can just obtain saturated trachytes/syenites. This is the case of tholeitic basalts that give birth to a family of rocks known as “Pacific Series“; from alkaline basalts we can derive the family of rocks known as “Atlantic Series“. The “Mediterranean Series” is a particular family of rocks deriving from alkaline-potassic basalts. It is so silica-poor that it cannot reach further than phonolites (see above diagram). The series that from basalts gives birth to phonolites is typical of mid-ocean ridges. Along the Pacific margin, magmas probably react with the silica-rich continental crust rocks they go through while reaching for the surface. In many evolutionary series, the assimilation of surrounding rocks sums up to the usual fractioned crystallization process. 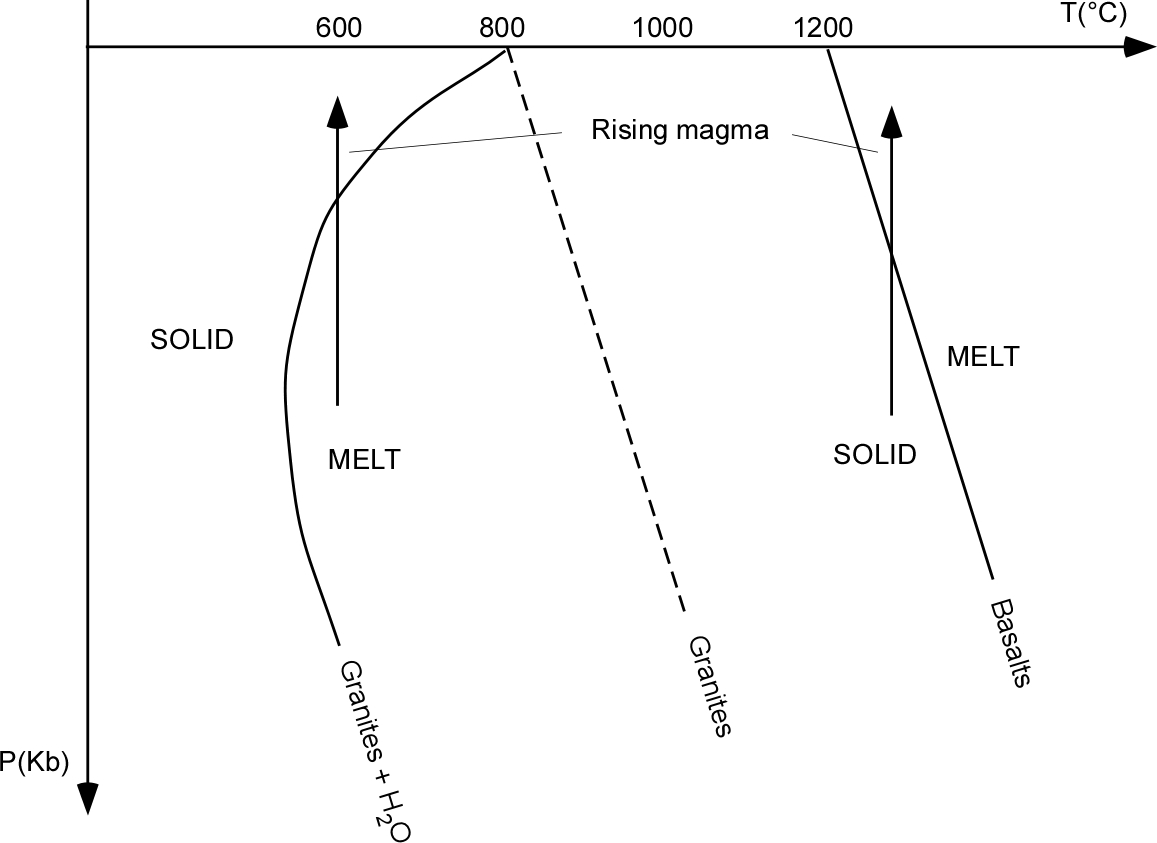 Ryolitic magmas melt around 800°C, their viscosity is higher than the basalts’. The water content is as high as 10%, which decreases the melting temperature to 600°C if pressure increases. Therefore, less viscous basalts can reach the surface more easily, while ryolitic melts crystallize underground as granite batholiths (see graph at left). Basalts are generally originated during depressurizing processes like extensional tectonics along mid-ocean ridges; granites are generated by high pressure during orogenic processes. Basalts are common in ocean floors, whose average composition is very similar; granites are typical of continental crust, which is closer to the diorite-granodiorite composition, by average.

For what concerns the mantle, some speculated about an Olivine-rich composition since some xenoliths from kimberlitic lavas (typically from very deep, upper-mantle reaching volcano conduits) showed “peridotite”-like composition (a rock almost exclusively made of Olivine). Peridotite’s density is nearly 3.3 g/cm3, similar to the values derived from the upper mantle’s seismic properties. 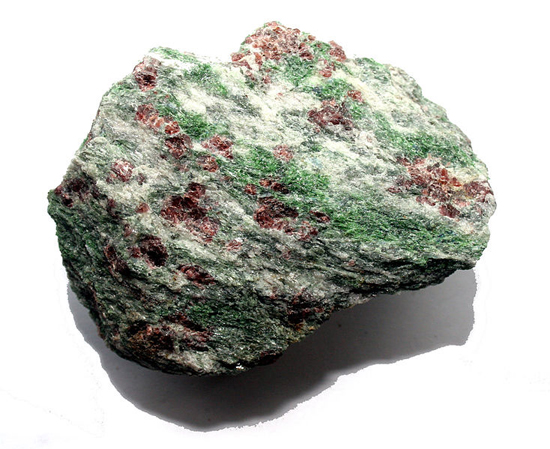 Thomas H. Jordan of MIT (currently USC) proposed a mantle composition with 60% Olivine, 12% rhombic Pyroxene, 15% monocline Pyroxene, 13% Garnet. Such a rock is called “garnet lherzolite”. The portion made of Olivine and rhombic Pyroxene would correspond to the peridotitic part. At those depths, the monocline pyroxene could be Omphacite, a mixture of Diopside-Jadeite by composition. It is often found together with Garnet in a metamorphic rock known as eclogite (right). Well, the eclogite’s chemical composition is identical to the basalt’s. Garnet and Omphacite are only stable at high temperature and pressure. When a portion of the lithosphere undergoes tectonic extension, the pressure drop makes them unstable – they melt into a basaltic magma.